I just finished reading "White Fragility, Why it's so hard for white people to talk about racism", by Robin Diangelo. 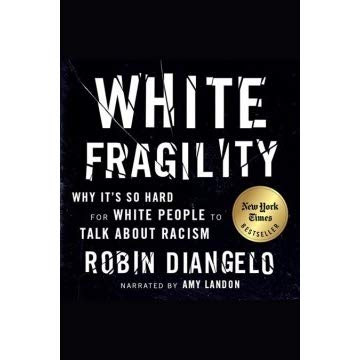 I have to admit, I read this book because of a controversy which started on Instagram.  At the time, I was confused about what was happening on Instagram.  There was a lot of anger, a lot of finger pointing, a lot of talk about a lack of inclusion.  My first thought was, well, if people of color want to be included they should just jump in and be included!  Simple, right?  The more I read the comments from POC (people of color), the more I realized I really didn't have a clue what was going on.  I was living in my happy little "white" world.

So I found a book from the library on race relations and attempted to read it.  WAAAAY too religious for me.  That book constantly quoted from the bible.  NOT for me.

I sent that one back (I don't remember the title), and put "White Fragility" on hold.

Finally received the book.  Now I'll be buying it.

What I like about this book;  NO GUILT.  As the author writes, guilt doesn't help.  LEARNING helps.

Robin Diangelo is a white woman, if that helps remove any fear you may have of reading this book.  She's the first to admit she's racist.  She explains that being white and not being a racist is impossible in the U.S.

Here's an excerpt from her chapter;  How Does Race Shape the Lives of White People?

"I was born into a culture in which I belonged, racially.  Indeed, the forces of racism were shaping me even before I took my first breath.  If I were born in a hospital, regardless of the decade in which I was born, any hospital would be open to me because my parents were white.  If my parents attended a childbirth preparation class, the instructor was most likely white, the videos they watched in class most likely depicted white people, and their fellow classmates with whom they built connections and community were also most likely white.  When my parents read their birthing manuals and other written materials, the pictures most likely depicted primarily white mothers and fathers, doctors and nurses.  If they took a parenting class, the theories and models of child development were based on white racial identity.  The doctors and nurses attending my birth were in all likelihood white.  Although my parents may have been anxious about the birth process, they did not have to worry about how they would be treated by the hospital staff because of their race.  The years of research demonstrating racial discrimination in health care assure me that my parents were more likely to have been treated well by hospital personnel and to receive a higher caliber of care than would people of color."

"Conversely, the people who cleaned my mother's hospital room, did the laundry, cooked and cleaned in the cafeteria, and maintained the facilities were most likely people of color.  The very context in which I entered the world was organized hierarchically by race.  Based on this hierarchy, we could predict whether I would survive my birth based on my race."

"As I move through my daily life, my race is unremarkable.  I belong when I turn on the TV, read best-selling novels, and watch blockbuster movies.  I belong when I walk past the magazine racks at the grocery store or drive past billboards.  I belong when I see the overwhelming number of white people on lists of the 'Most Beautiful'.  I may feel inadequate in light of my age or weight, but I will belong racially.  For example, in 2017, singer Rhianna introduced a makeup line for women of all skin colors.  Gratitude from women of color poured in.  Many of their tweets included the exclamation 'Finally!'  These are tweets I have never needed to send."

I belong when I look at my teachers, counselors, and classmates.  I belong when I learn about the history of my country throughout the year and when I am shown its heroes and heroines-George Washington, Thomas Jefferson, Abraham Lincoln, Robert E. Lee, Amelia Earhart, Susan B. Anthony, John Glenn, Sally Ride, and Louisa May Alcott.  I belong when I look through my textbooks and at the pictures on my classroom walls.  I belong when I speak to my children's teachers, when I talk to their camp counselors, when I consult with their doctors and dentists.  No matter how I might explain why all these representations are overwhelmingly white, they still shape my identity and worldview."

(I added the underline and bold)


I highly recommend this book, obviously.  But it's not for the faint of heart.  It will make you think.  It made me wince many, many, times.  It made me think, think, think.  I love the way the author approaches the subject of race with white people.  I WILL read this book again.  I will probably add all kinds of highlighting to it so I can refer, remember, and try to learn.

I really recommend you give it a go.  What do you have to lose besides your own white fragility?

Posted by Victoria Williams at 9:47 AM

I just finished reading "We Were Eight Years in Power, An American Tragedy", by Ta-Nehisi Coates. Another eye-opener about racism.
Janice

Thanks Janice, I put a hold on this book at the library.