He grew up in Baker City, Oregon. His mother had probably already died from the flu by the time this picture was taken. Dad's the boy in the middle. 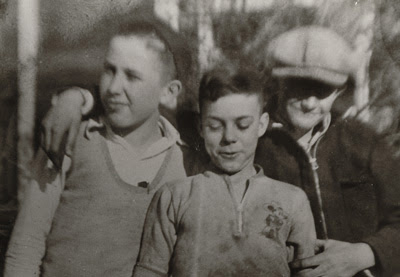 He met my mom in Chicago. They married after Dad came home after WWII. 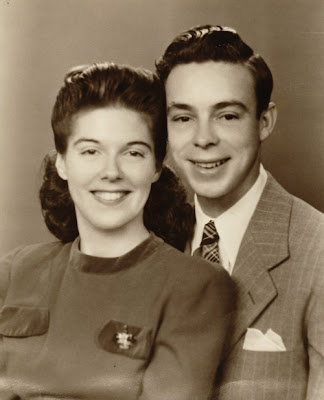 Dad spent three long years as a POW in Japan. While he was in captivity in the Philippines, his only brother died with him. Their father died before dad returned to the states. 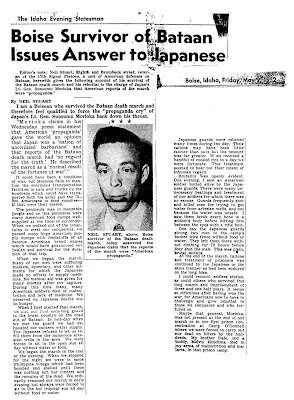 My dad, Neil (on left), with his best friend, Jack. I'm in the middle. 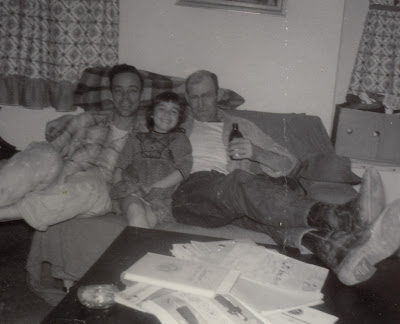 The house we lived in for 16 years of my life. 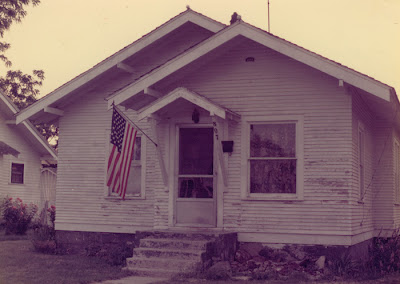 My dad with one of his monkeys. Yeah, we had monkeys. And no, it wasn't fun. 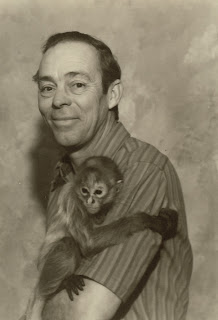 At my first wedding. 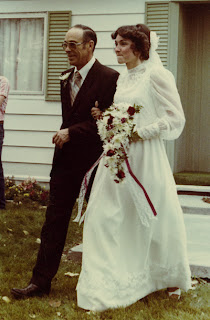 And involved in his favorite activity, something he enjoyed along with my ex. 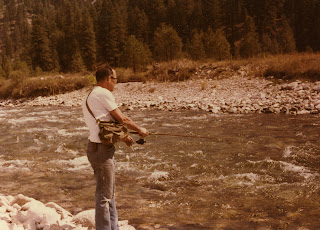 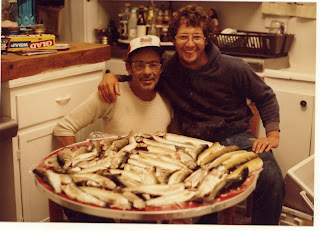 Dad was a difficult person to love. Alcoholics, as many people know, are quite the challenge. He was often a complete asshole. But I never, ever, doubted his love for me. I can't say the same of my mother.
I miss dad's directness. He never beat around the bush, that's for sure. And he taught me to at least try to be my own person no matter what people may think.
Dad was the one who picked me up at school if I had cramps, and I could actually talk to him without embarrassment on such subjects. He was the one who wondered what was wrong if, as an adult, I wasn't having sex with my current boyfriend. But he also shamed me by making loud, drunken, sexist remarks in public.

I remember Dad puttering around in his garden after he retired. He loved growing vegetables. For a time he kept a rooster in his backyard; the damn thing would run me out when I would come over to gather lilac blooms. At some point Dad killed the thing, ate it, and used the feathers to tie fishing flies. Typical dad. I still miss him, but when he died, I spent that night on the couch where he fell from his heart attack/stroke, whatever, and I remember that I finally, as a 34 year old married mother, I finally felt safe in the home I grew up in.
Posted by Victoria Williams at 10:59 AM

Wow, a tough life. One can understand how a person could fall into alcoholism after a trail like that. Thanks for sharing. . . .

Oh my gosh, Victoria. You are amazing. This post had me riveted to my computer screen from the first word to the last. Your dad was a very complicated man and no doubt you still bear the scars of his difficult temperament. You only briefly mentioned your mother but it sounds like she was a lot like mine--in her own world where children were not allowed.

I bet for your dad the alcohol was his way of self medicating. Being a POW had to be difficult and of course our government is a long way from taking care of our vets.

It's great that your dad was approachable and that he'd talk to you about things but it sounds like he was a little off with his boundaries and then shaming you in public. I bet he thought it was really funny. Ha, ha... no concern for your feelings... so frustrating! Why is it always so complicated?

Thank you so much for sharing this Victoria. You are not alone. I'm sending you a great big hug.

I think Grace said it the best. Thank you for sharing this story, what a life, both your father's and yours. Alcoholism is hard to live with.

Wow, I have conversations with strangers about these things. At first they don't want to be embarrassed and then I tell them about my estrangement with my dad and my mom and sister's antics. Sometimes growing up isn't normal (and you yourself don't know that). Hell, what is normal anyway? I love your honesty, that sort of honesty brings healing. Man he had a tough life. You may also get why I moved so far away from my family. Nice post.

Your dad’s got a hard life during his early years. It’s not easy to be a POW. Any time of the day could be his last that must be one of the things on his mind then. And knowing how his father and brother did not make it, must surely be heartbreaking for him. Being in a warfare is physically and emotionally draining, which makes it hard for them to adjust when they get back home.