I do. I give up.
Fall has arrived and I can't deny it any longer.

'Oranges and Lemons' Gaillardia blooming with some asters; 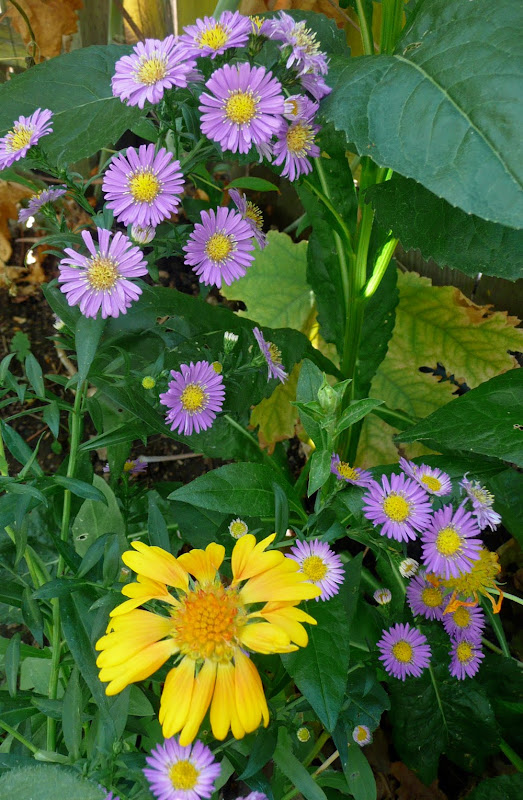 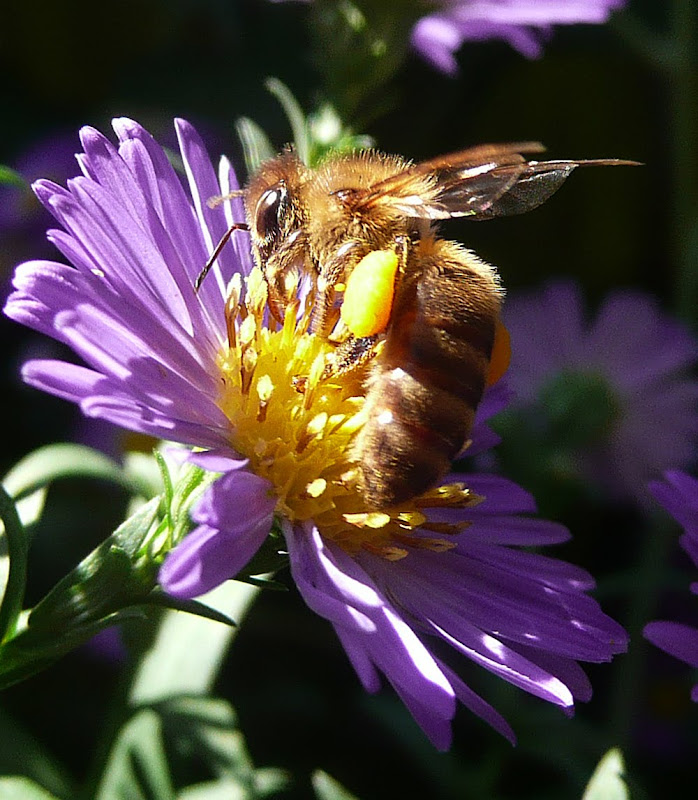 Busy bee on those asters. 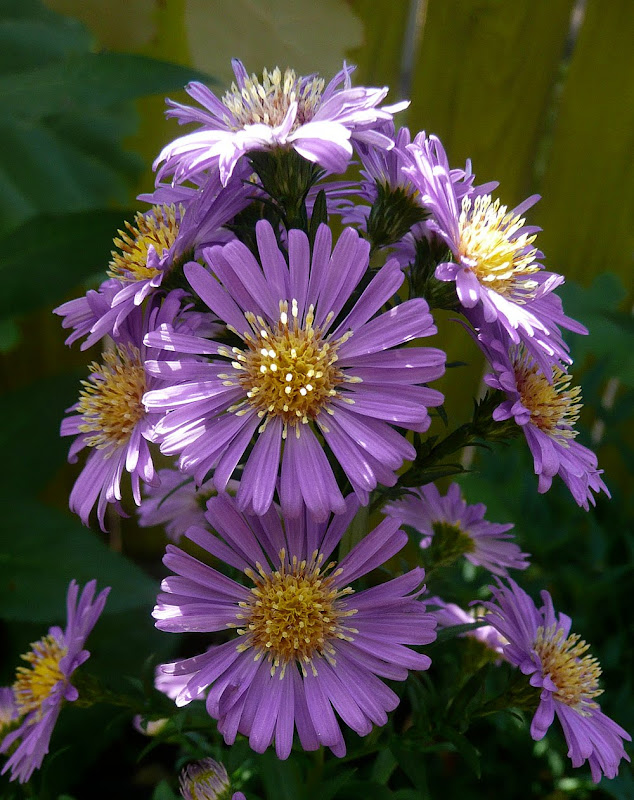 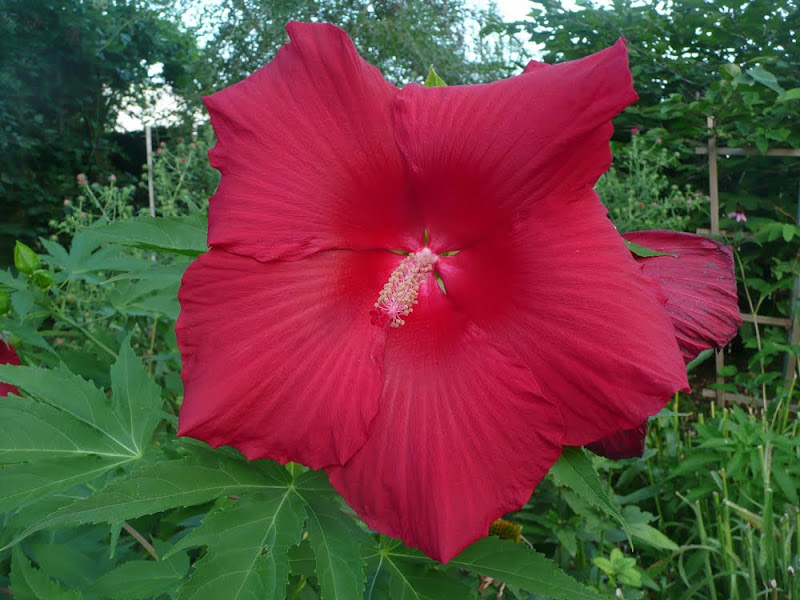 The hibiscus have finished blooming.

Now we have 'Fireworks' Goldenrod, some phlox, and Japanese Anemones going at it. 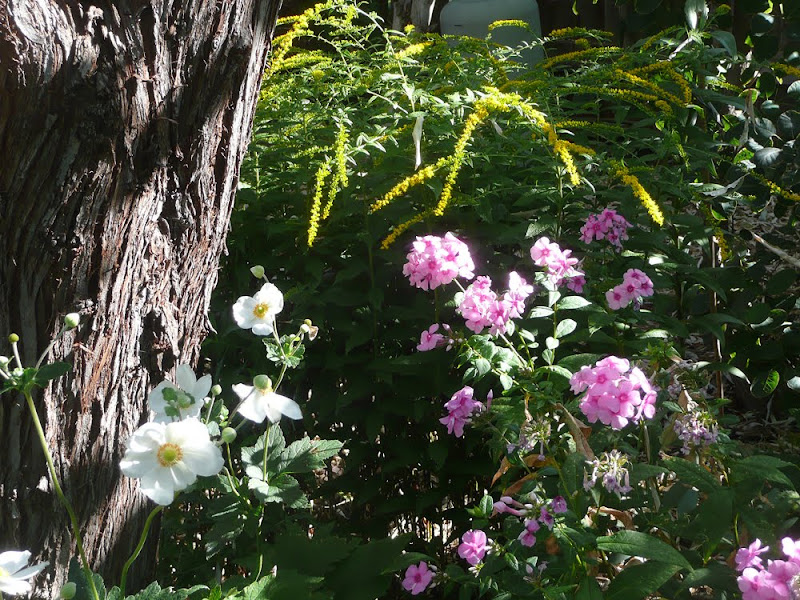 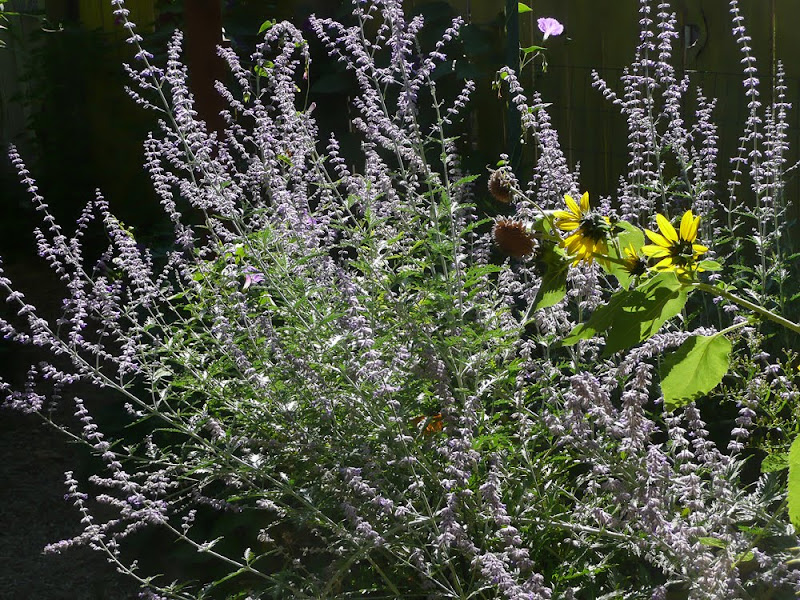 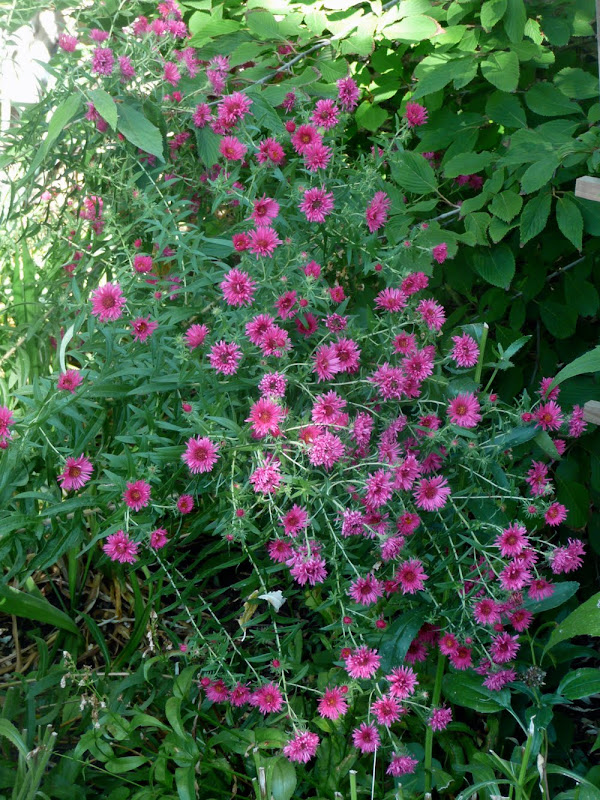 The girls run to the back porch when we let them out of the coop; they're anxious to eat any grapes that have fallen off the vines. 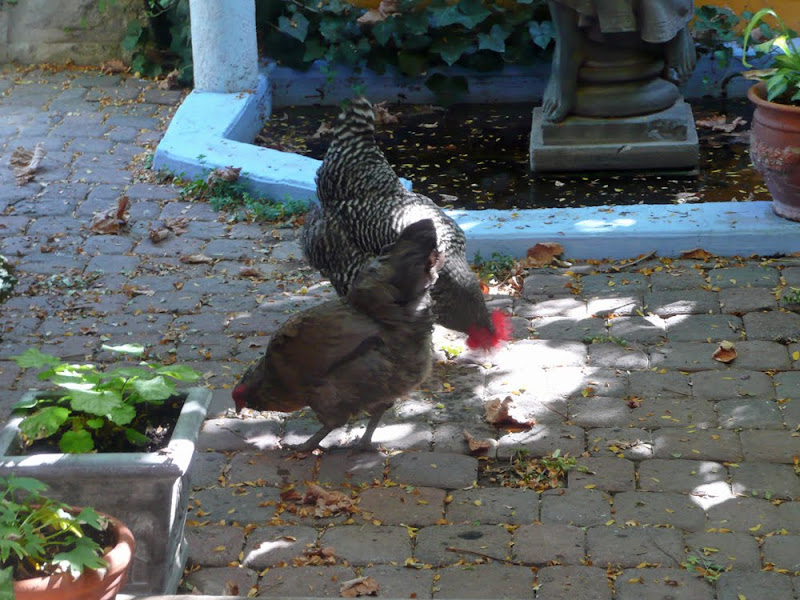 I only want to show you these little vignettes because the garden looks so tired now that September is almost over and October is sneaking its way in the door.

The weather has been cooperating though. No rain, but gorgeous days in the 80's. The sunlight streaming through the grape vines on the back porch while I lounge around and do some leisurely reading has been nothing other than lovely.

I also often have this little fur ball on my shoulder; 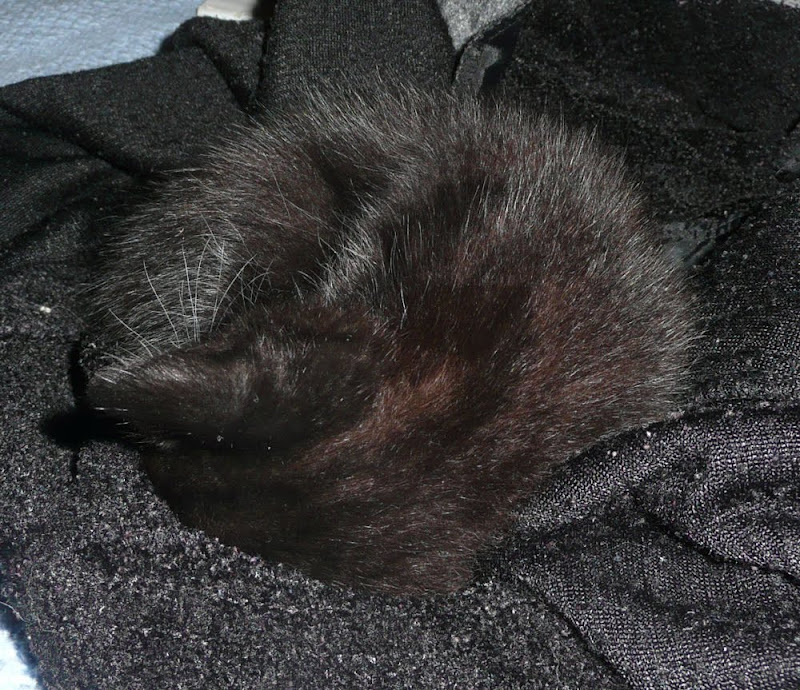 We've recently adopted a "half brother" of Jessie's. 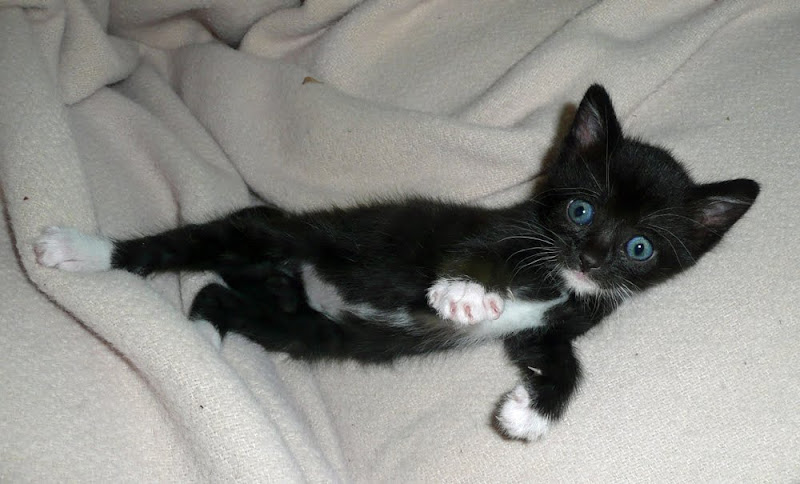 His eyes really aren't that blue, must be something about the camera flash.
But he is a cutie. We were willing to adopt another one since our old cat, Ebbie, disappeared, and we thought Jessie could use a play pal.


And Jessie has been enjoying what he seems to think is his new "toy." 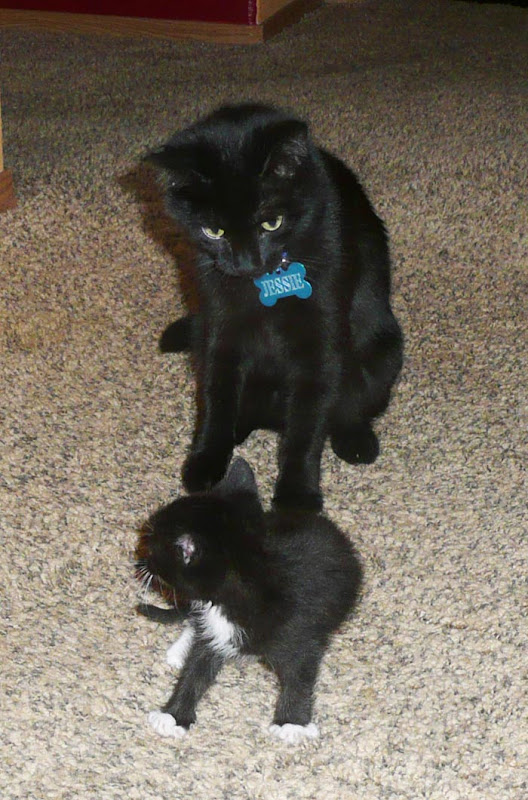 
There have been plenty of times we've rescued Felix from Jessie's rough housing, but they've been OK most of the time. 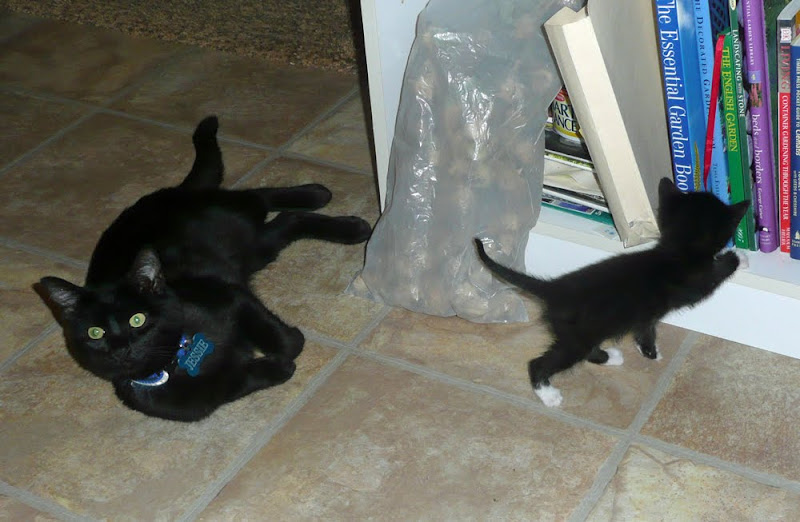 Hope your transitioning into fall has gone well and that you have plenty to feel pleasant about.
Posted by Victoria Williams at 11:51 AM

I love Jessie's tag. I had no idea chickens liked grapes. Our garden is pretty tired looking as well. I pulled all the potted petunias and geraniums that got all leggy and dried out and put in mums. Kyle just got the witches out of the raafters in the garage and I'm getting ready to start putting them out soon.

I am mad at myself that I didn't plan for asters in my gardens this year. Everyone is showing their beautiful aster blooms. Kittens are so much fun.

I hated to give in to Fall too Victoria. I was not done with Summer by far. LOL! Your Asters are so lovely and I adore the white Anemones. Ahhh, what a cute little kitty. It is going to be so ornery I can tell. LOL!

Felix is ADORABLE!! What a cutie he is! Your garden doesn't look tired in the photos, but I know what you mean -- it's the same up here -- time for fall planting...must get garlic in this week! Thanks for sharing your photos! Candace

I almost let out a scream of joy when I saw your first photo of cutie-pie Felix! He's adorable! I hope he brings you years of joy.

I know what you mean. It's not easy conceding to fall but I guess since it's almost October, concede we must. You've still got some lovely flowers though.

Even if your garden is waning the photos are utterly fabulous.
Any pictures of critters are always enjoyed.
I am going to search your blog for spring bulbs you have tried since I am in your zone and have been expensively feeding the deer!

I am with you, sister. It's fall Amen.
You do have some lovely blooms! I just ordered Japanese anemones. They last so long, don't they?

I'm loving the fireworks goldenrod you gave me a start of and I also have those same asters - they were a surprise that grew up in the middle of an echinacea a neighbor had shared. My one aggravation this fall has been bud worms in my petunias. I had radiant blossoms in three places till the nasty pests decimated them. We treated them and got one more bloom but then the worms came back. ACH! I'd never seen these before moving to Boise, but apparently others have had the same difficulty this year.

Hi Victoria. Your weather sounds like ours. Perfect days. We do need some rain tho even if I hate to give up the sun.
Your aster and bee photo is superb! I'm grudgingly accepting the season change too. It's never a good thing for me and not because of fall at all but rather what follows.
I didn't know chickens liked grapes either. That must be fun to watch!
Your new kitten is adorable. I bet they will keep you entertained this winter. :-)

oh my goodness, so cute kitten. and the russian sage--thank you for posting that, i've been wondering for a long time what that plant is. it grows in abundance by where i work, over in the parking lot between the cabin and the boise main library. it looks like some kind of lavender but i could tell from the scent that it wasn't.