Well I wasn't planning on it but I did it anyway. Vanessa and I did the Race to Robie Creek yesterday. 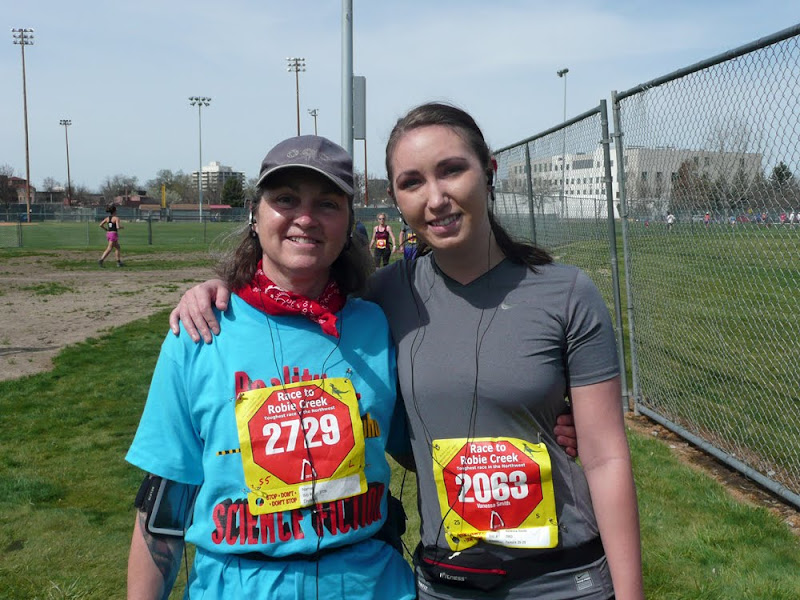 I had a hip issue in January and after finally seeing a doctor and having it diagnosed with a treatment plan I missed 6 weeks of running. So I decided to skip Robie Creek this year. But Vanessa found someone who had a registration to sell and I thought I could just walk most of it. So I did.

Here we are pre-race.

Vanessa and I split up early in the race this year. Last year we did the entire race together. 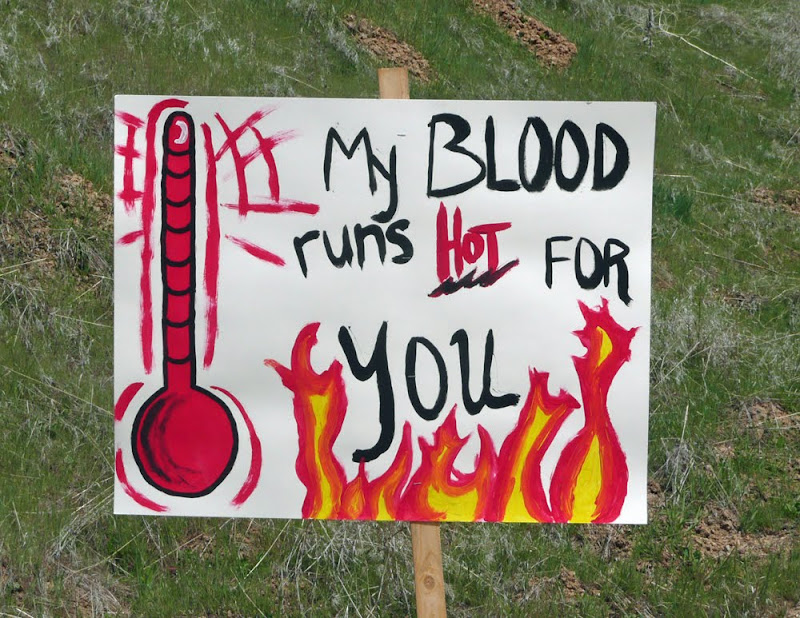 There was plenty of entertainment this year along the route. The theme was all about love and commitment. 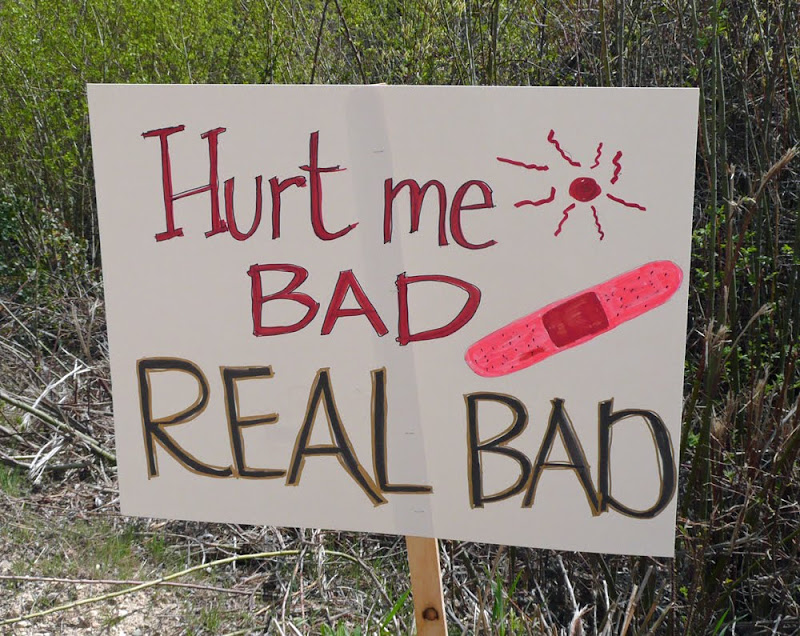 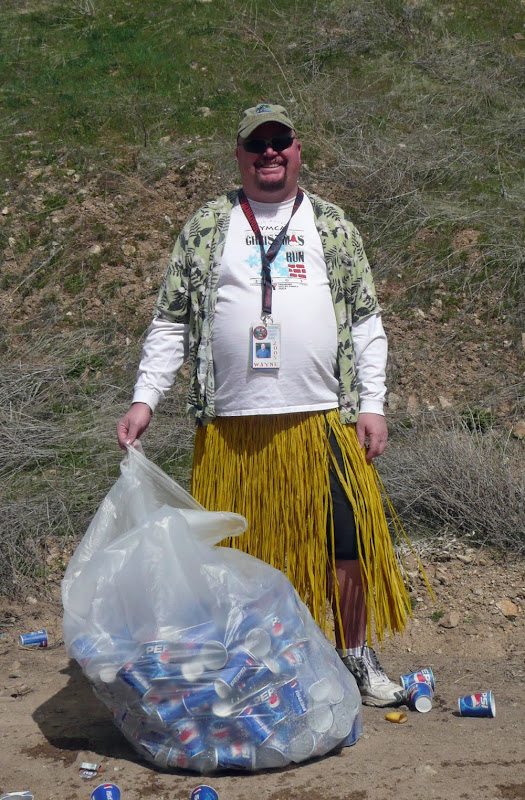 Different groups sponsor the water stops. This man was part of the Parrot Head Club.
I don't remember what mile his group was at. 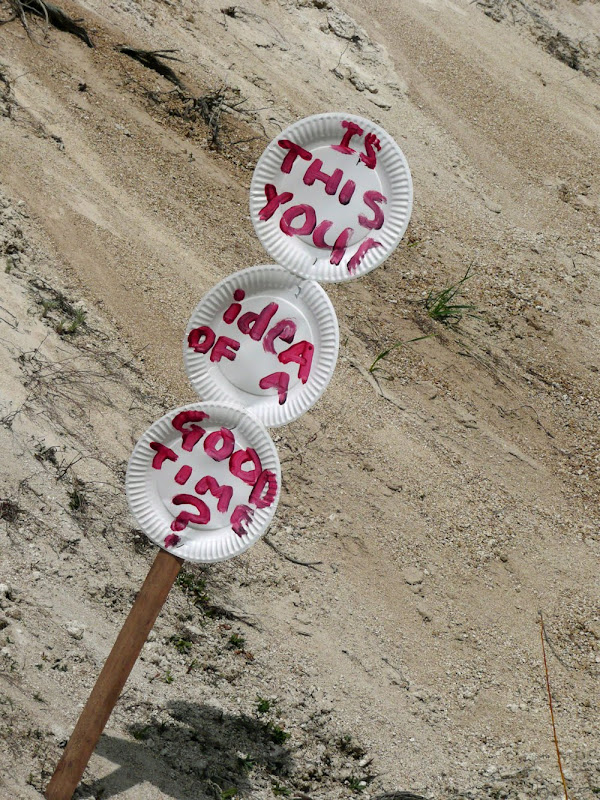 Around mile 8 we got "Temptation Table" where they try to talk the runners into giving up. Pretty funny stuff. 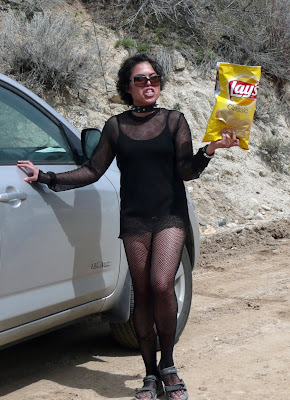 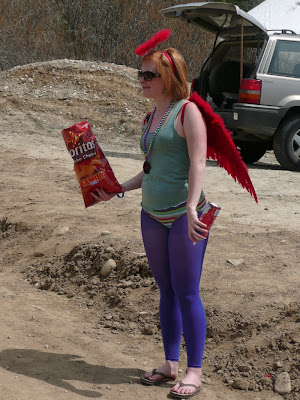 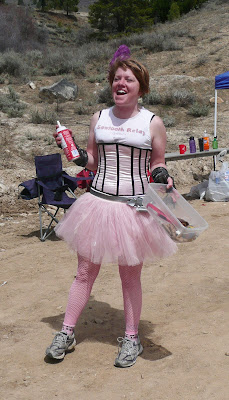 They were trying to give out whipped cream, chips and candy bars. 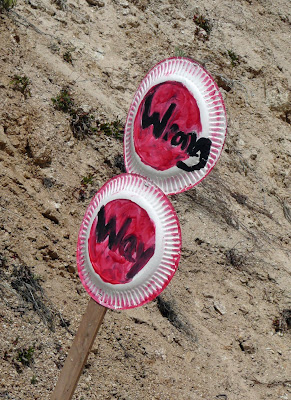 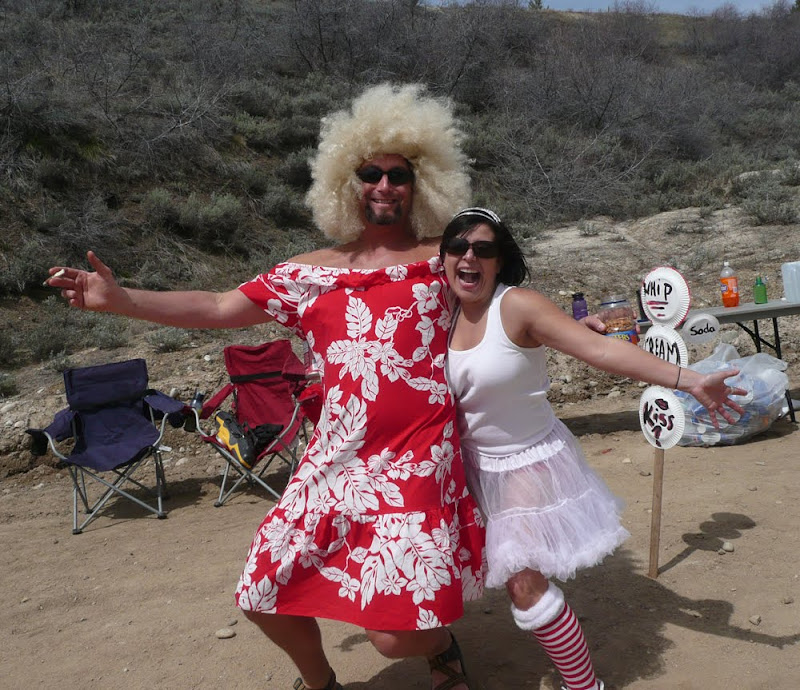 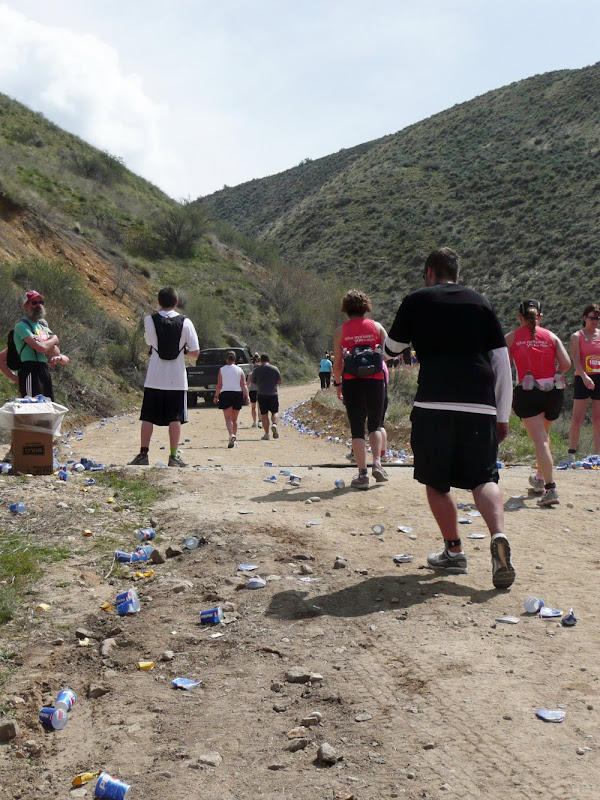 There were plenty of people in front of me. 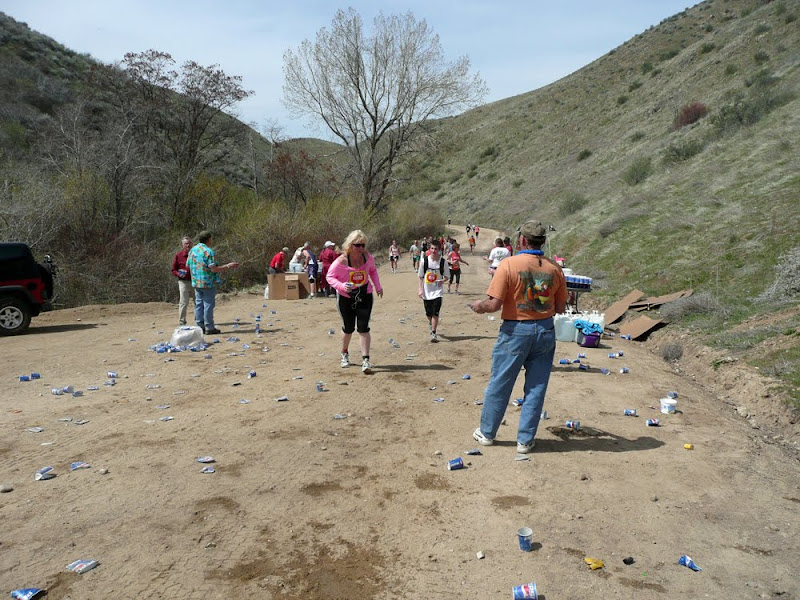 There were even some behind me. 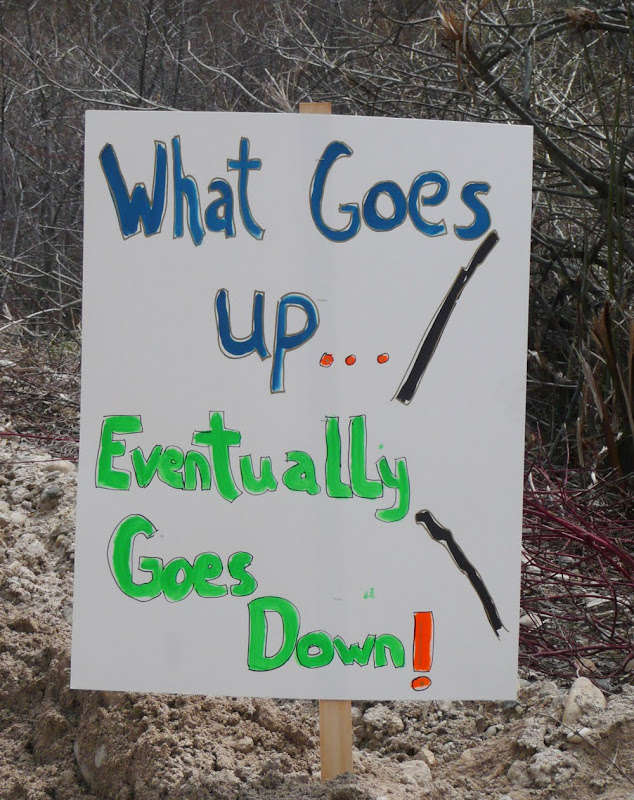 Almost to the summit.

The race is 8 1/2 miles uphill. The steepest bit is just before the summit. Everyone slows down there. Then the last 4 1/2 miles are down a steep hill on the other side, which was covered with ice. Yes, ICE!

Around mile 5 I picked this up: 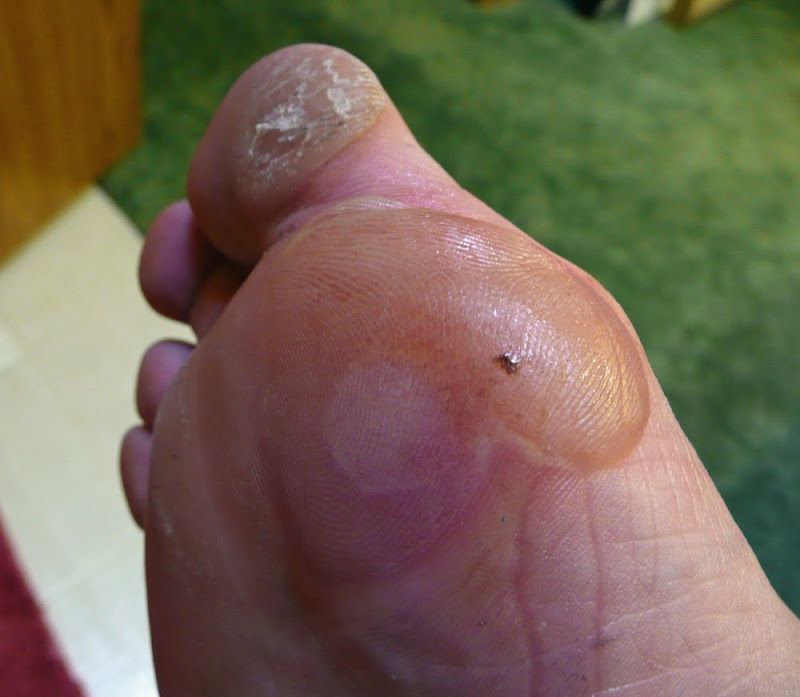 Yeah, fairly unpleasant, to say the least. I stopped and put a band-aid on it, but then I was running on a blister with a band-aid on it. Not much help. Also developed a blister on my left foot to match. Lucky me.

You read that right - running. I did run some of the race. Not much of it, but some.

Next race I'll try these socks and/or vaseline which I hear helps a lot.

Workin' hard at the finish line. 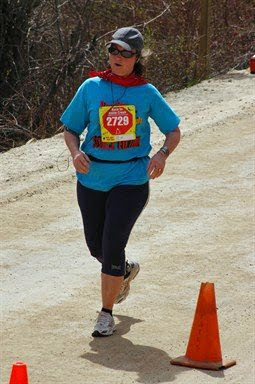 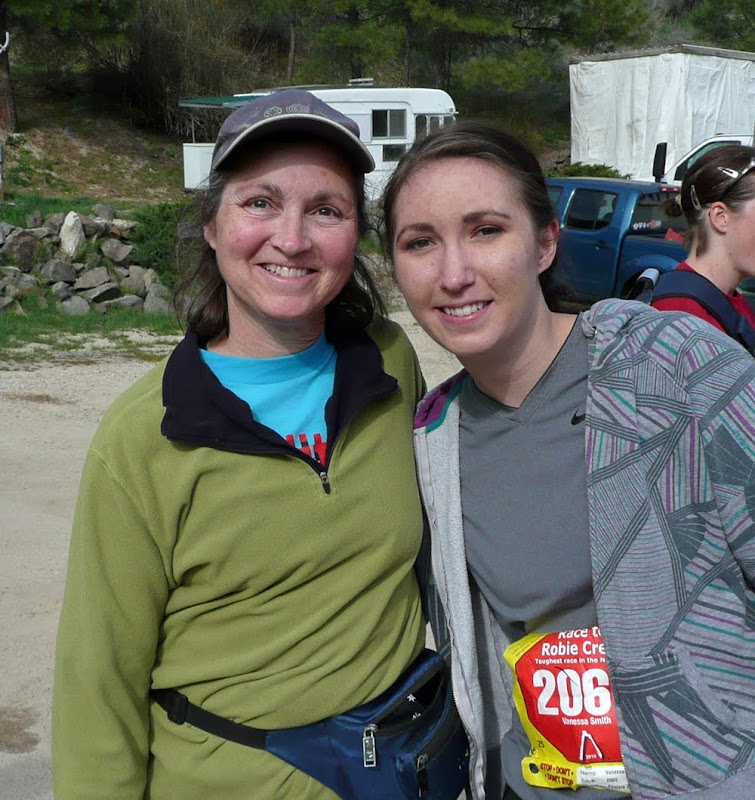 And why do we do it?

For the great socks and t-shirts, of course. And the ability to say we conquered the hill! 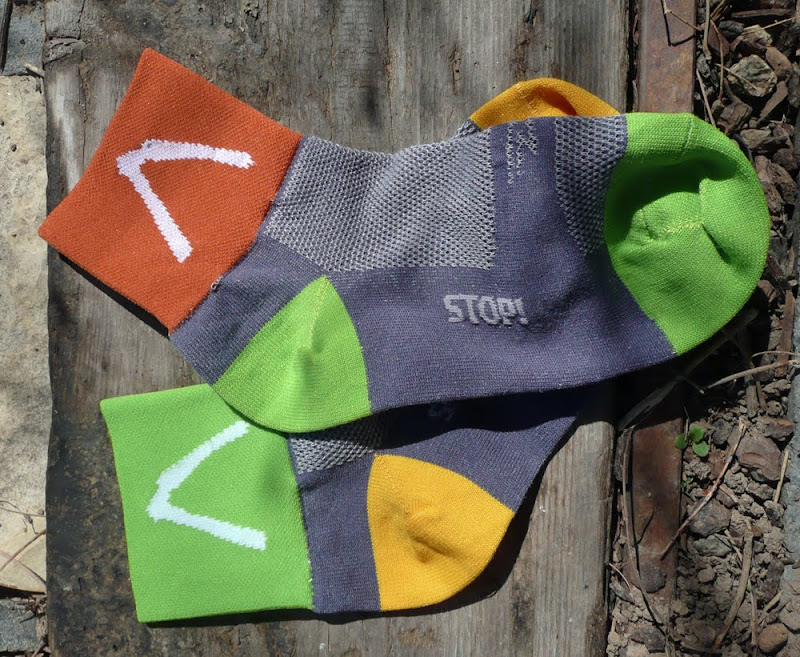 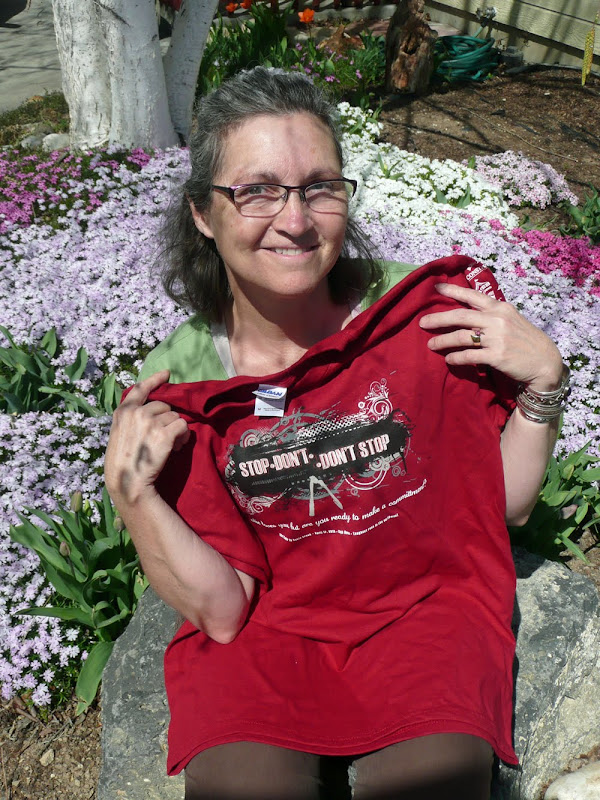 (The shirt says "Stop - Don't - Don't - Stop" and "Robie loves you but are you ready to make a commitment?")
Posted by Victoria Williams at 3:34 PM

That is quite an accomplishment! I can't believe you did this with a previous hip problem. It looks like it was very intertaining though! Good for you! Carla

I was reading thinking 'how cool' another race....then I saw that foot. OH My God!!! That just hurts looking at it. yikes

That is awesome. I love when they try to make the race fun, not that I've actually ever run one, just walked. I think I would've stopped for the Doritos though :)
Great job!

Oh you are something! I remember when you did this last year. Once would be good for me! ha. Congrats to you tho for powering thru the pain and finishing. That has to feel good.
It looks like fun tho ~ that always helps keep the spirit up. I'd love to have the socks & t-shirt ~ can you get that if you stand there with the temptations???!!! ;-)

Congrats anyways! I wish i could do that! And sorry about your blister. At least you've got something to accompany the story..haha. Thank-you for visiting my blog, i hope you continue to do so, i will definitely be back to yours :)

Have a beautiful week.

Truly amazing as it was last year.

My hero..you go girl !
The entertainment along the way is way too funny.

I have never understood why people run marathon's for fun. My friend Sherry ran the marathon @ disney world recently and I kept telling her not to poop her pants like this guy... http://poepgrapjes.nl/blog/wp-content/uploads/2008/09/poop-marathon-runner.jpg

I offer you the same advice :)