Yesterday Kim and I decided to do some snowshoeing around the town of Lowman. Lowman is a small town about 80 miles from Boise and is situated along the South Fork of the Payette River. We left our house at 8AM.

The drive up provided some great scenery. 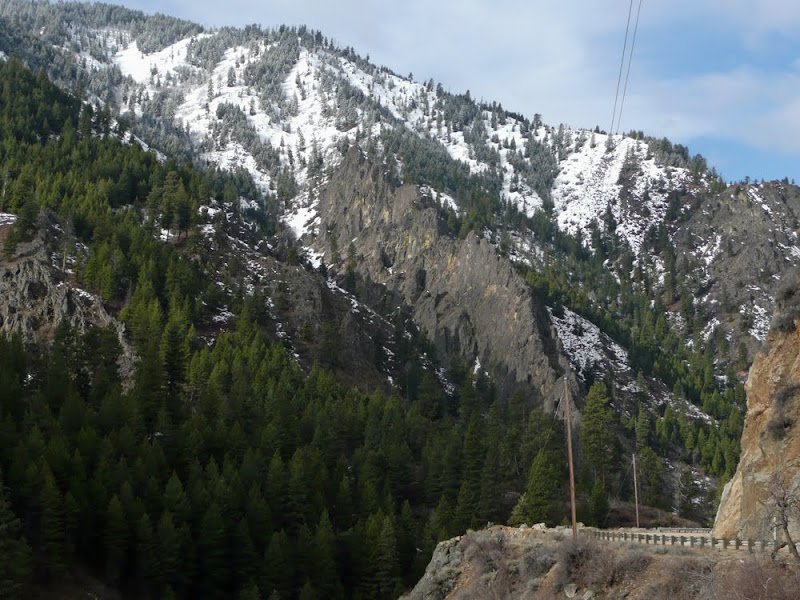 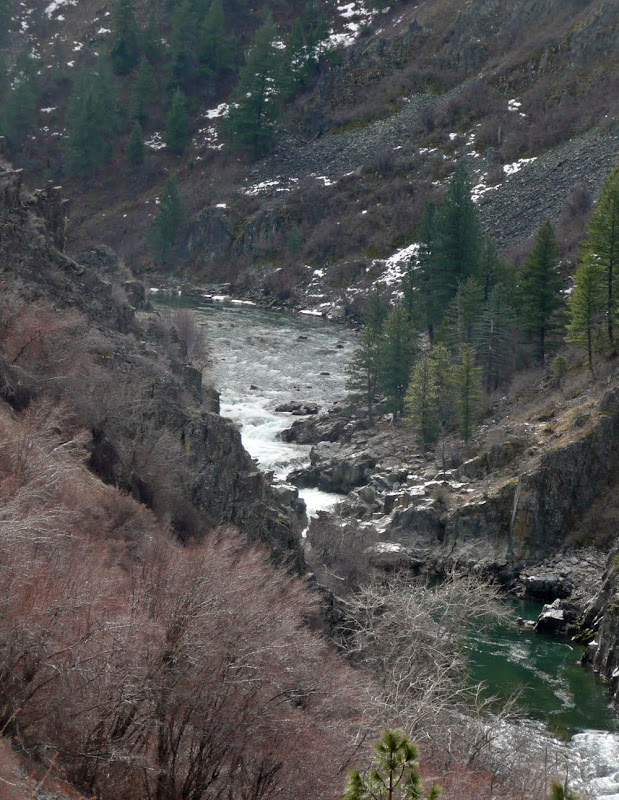 Elk, deer and wild turkeys are common wildlife along this route.
We saw all three. 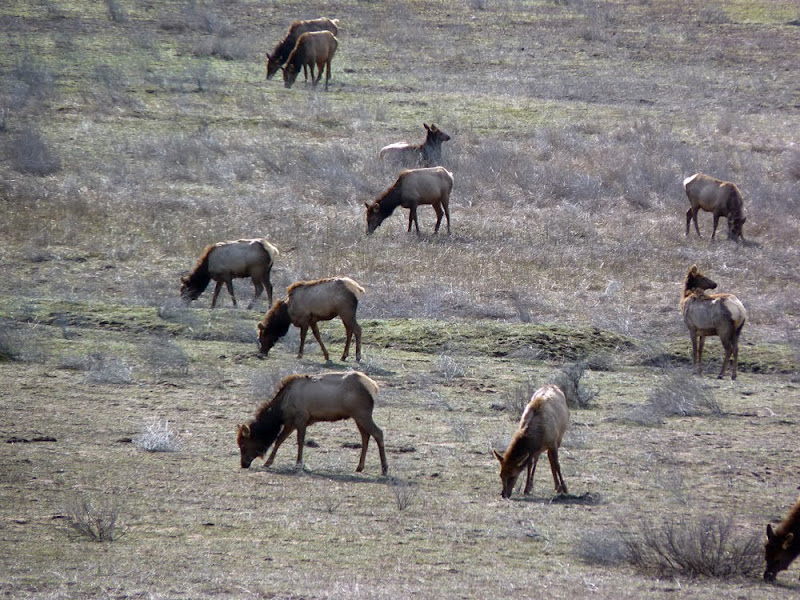 When we started snowshoeing I had a little trouble staying upright, but no broken bones ensued. Just a torn fingernail, a bruised knee and ego. I'll survive all three. 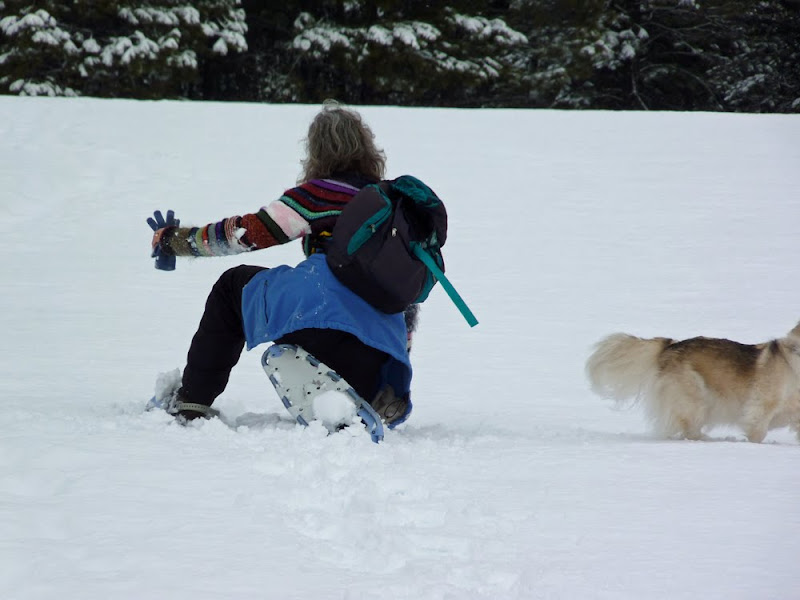 I still had a good time. Our route included checking out Bonneville Hot Springs. 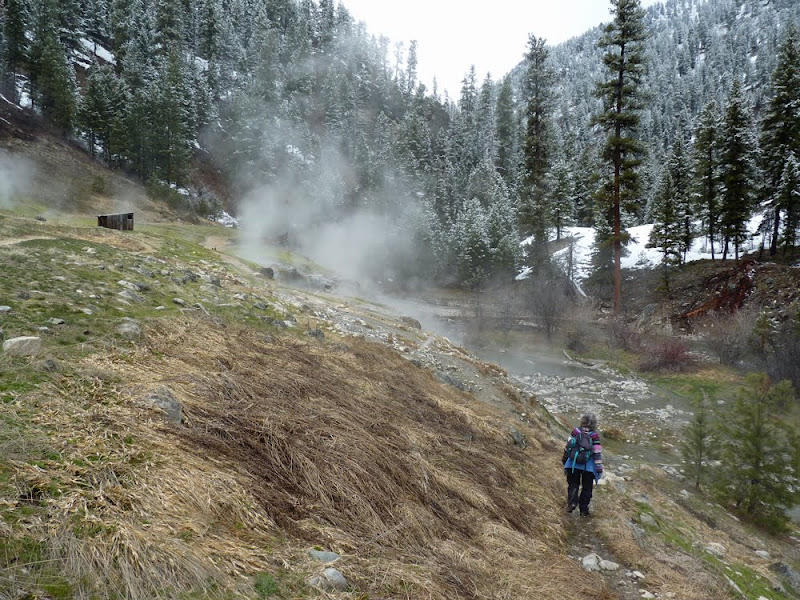 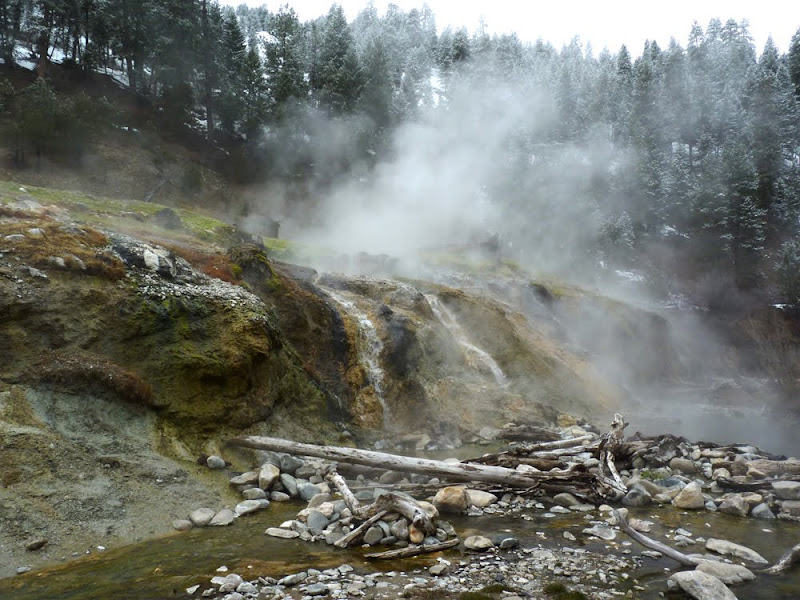 You can see the effect of the hot springs on the snow behind Kim; there isn't any. 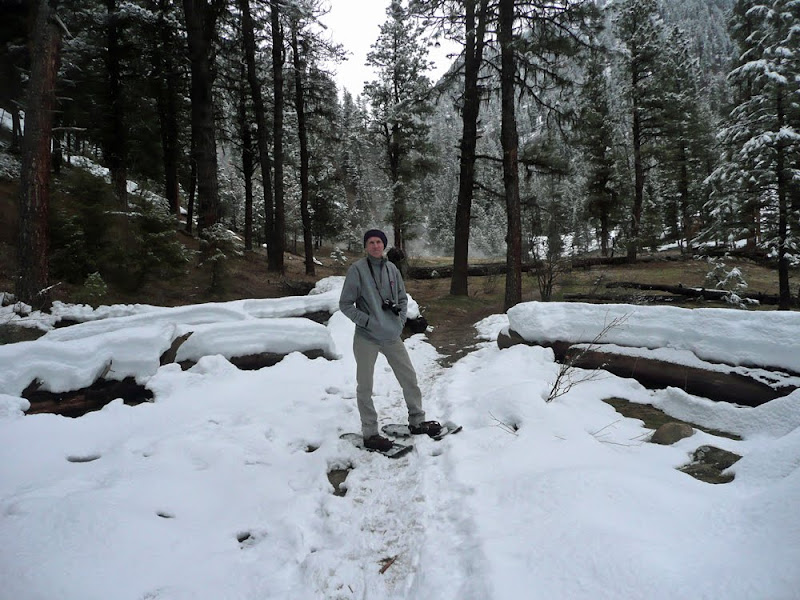 Made me wish we'd brought towels. The water looked great and we'd been snowshoeing about 5 miles.
But we had company coming over for dinner.

We stopped in Lowman for lunch and made it home by 4PM.


Lucky for me I had followed Jaz' instructions and the main dish had been marinating all night. I just had to put the potato dish together.
Here's the link to her recipes at her blog OctoberFarm.

The recipes are for Pork Tenderloins and Potatoes Au Gratin. Trust me, you'll love these two. I've never had so many compliments on a meal before.

Here's the meat right out of the oven; 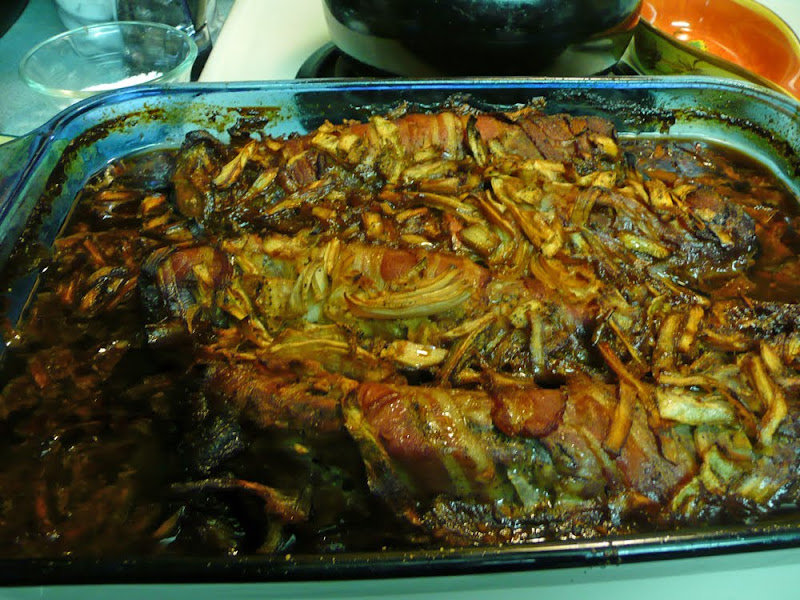 I bought two packages of pork tenderloin; there were two tenderloins in each package. I get the feeling they usually come that way. There were five people eating the meat course, two of them were young men who always have seconds when they like the food. (And they both had seconds last night.) We had one small tenderloin left over.

The potatoes were just as good. (I ate some of them.) To simplify the baking of both meat and potatoes, I cooked the potatoes along with the meat; 2 hours at 300 degrees and it worked out great. 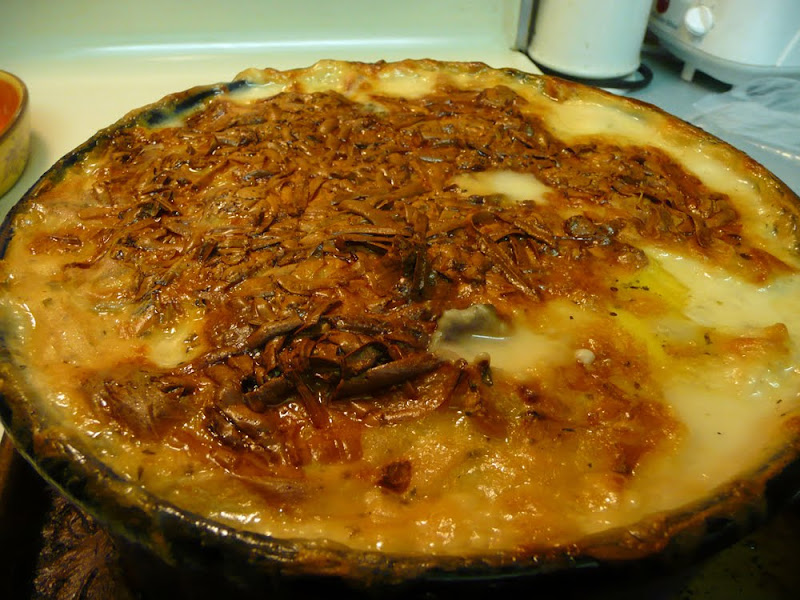 I served a green salad on the side.

For dessert, you know me, I had to try something new.

Out of my SweetCakes Best of Fine Cooking magazine I tried the Ginger-Mascarpone Icebox Cake. (Read ginger flavored cheesecake.) 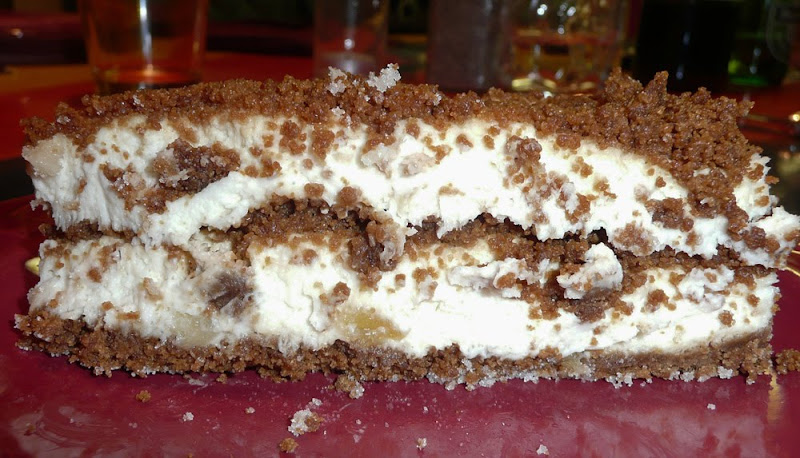 Even as a chocolate lover, this non-chocolate cake was delicious. Everyone loved it. Even Chris finished his dessert last night and he never finishes dessert.

Here's the recipe and it's so very simple:
(click to enlarge) 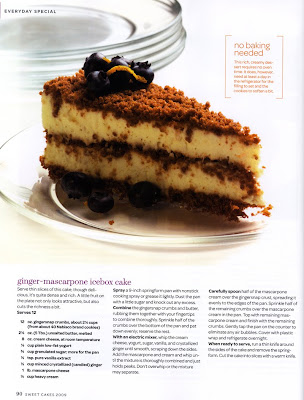 Thanks for sharing those recipes Jaz, and for including such great instructions!
Posted by Victoria Williams at 9:05 AM

Wow all that exercise and then home to a fabulous dinner , what a great day ...Beautiful scenery.

Wow, what a day! The scenery was beautiful and I could almost smell dinner cooking! I think I will check out the recipes and try them myself!
Carla

It must be a splendid experience to do snowshoeing 80 miles away... The recipe smells good! ~bangchik

but hey, you looked stylish falling down in that gorgeous sweater of yours!!!! ;-)
Looks like fun to me. A dip in the hot springs would have felt fabulous ~ maybe a trip back??

I can't believe how organized you are ~ I wouldn't been able to pull off a meal like that after an all day outing. You ROCK. Everything looks FANTASTIC (but then everything I've seen of yours does). The dessert especially (you know my sweet tooth).

I've always thought snowshoeing sounded like fun. What nice views you had along the way.
Your dinner and dessert looks so good. I love potatoes au gratin. I would've been ordering pizza after a day of hiking through the snow, you are a much better hostess than me :)

Hi Victoria and Kim, i am new here just followed your comment. I am fascinated by snowshoeing and recipes. Since snow is alien to us in the tropics i felt the excitement, but we also have mud springs, oh a lot of them. I also love the photos in older posts especially the 3 chickens, lovely pets. You seem to really be enjoying life in there a lot. thanks.

How fun!!!! So odd that you are snowshoeing, and I am checking out my irises and african daisies in my garden that are about to bloom! LOL!

Fun post !
Boy, I wish I had your energy.
Must of felt great getting all that fresh air and then the wonderful food.
The Hot Springs looks pretty cool.

Wow, beautiful scenery!
And your food looks yummy, as always.

hey...cool. this is the first time i have seen any of my recipes made. yours looks very yummy. glad everyone liked them! i love snow shoeing too!