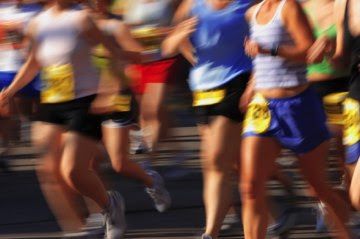 It's been a tough two months getting ready for the Race to Robie Creek which takes place this Saturday, April 18th at 12 noon.

On April 4th Vanessa and I ran ten miles together. We wanted to see how our individual running paces would work out. We did fine. Vanessa appreciated my "snail pace" and we managed the 10 miles without too much trouble. Kim had dinner and wine ready for us afterwards. (Much appreciated.)

On April 7th I ran 5 miles (before work) and included some hill work.

Yesterday Vanessa and I did 8 miles together.

This week we will be scaling back as we make sure we're rested and ready for the race.

(Notice how casually I write five miles, 7 1/2, and ten miles. Nothing in those sentences mentions the socks I've worn through, the many blisters I've had nor the blackened toenails. None of this training has been easy. It's been all sweat and blood as I push this 54 year old body into a continuous jog.)

Our strategy (read desperate plan) is to stay together and to take a break at all rest stops for refreshments and oxygen intake. We're hoping to finish the race in under 4 hours. The top runners will finish in just two hours or less. (We won't be among them.)

"From the starting line in Fort Boise Park, the race takes runners over a combination of paved roads through the first eight miles of the race, after which the race then switches over to dirt roads as the course winds through the mountains on its way to Boise's Aldape Summit. From miles 9 through the finish, the course then makes its way downhill, featuring a nasty hairpin turn at mile 9 that "haunts your dreams," organizers say.

There's a distinct possibility of running into some snow. To give you an idea of the terrain I took a drive up the route this week. (Some crazy, crazy people actually use this route for race training.)

A couple pics of the race route: 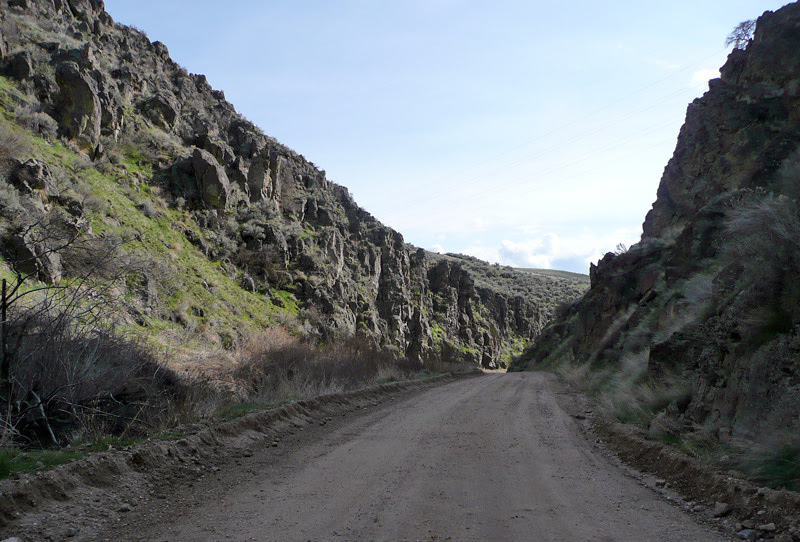 Doesn't look too bad, right?
Remember, we'll be climbing 2000 ft in elevation. It's steeper than it looks. 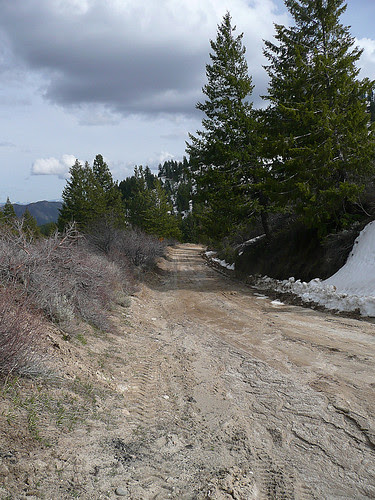 See that white stuff beside the road on the right? Yeah. It's snow.

And a view from the top, looking away from Boise: 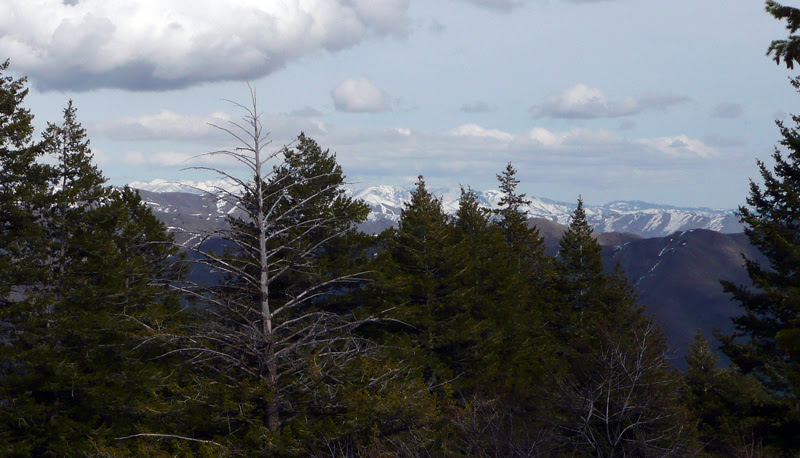 The weather forecast for race day is 66˚ and mostly sunny.

We'll be happy just making it to the finish line on our feet. Then it will be party time! Or something. Probably more like recovery time. 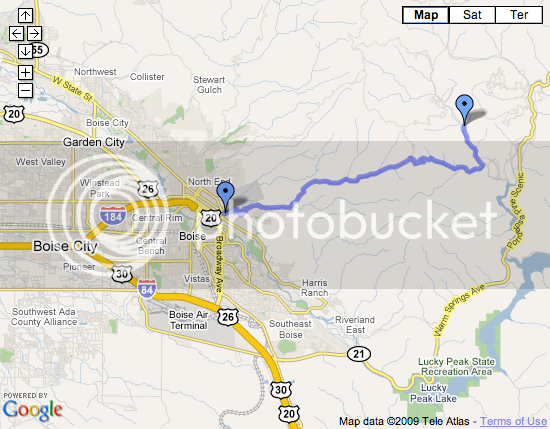 Wish us luck!
Posted by Victoria Williams at 9:29 AM

That's where the Robie Creek race is?! Jordan I accidentally drove up there and walked around on Wednesday evening while we were cloud chasing. We couldn't believe how pretty it was and that we had never heard of Rocky Canyon before. It's just lovely through there right now! I wish you the best of luck with it.

WHOA! Wish I could come over and cheer you on. Good Luck! I'll be anxious to hear how well you did.

Looks like quite a trek. Makes us miss the west and mountains that meant business. Does NOT make me want to tackle them on foot at the moment, not at a running pace anyway. Maybe a nice stroll with a flask of hot tea.

Good luck to you!

Victoria- you are amazing. Robie Creek is the premier race in Idaho and from what I hear, a hard one to get a spot in. Good luck, I will think of you on Saturday!

Wow, that is some tough looking terrain....... let alone the elevation. Wishing you and Vanessa, strong legs .

Good luck in the race! Hope we get good weather in Boise that day...
Have enjoyed reading your blog.

Hello!
I wandered onto your blog from my friend's (Wazoo Farms). I grew up in Idaho, on Robie Creek, but haven't been back for 25 years or more! The race route looks like our "short cut" from home on Robie Creek into Boise...sometimes a bit treacherous depending on what the weather had done to the dirt road, but always an excellent view of the city from the top! I wish you the best of luck!
Tonya

Temps sound ok, but has to be tough breathing at an elevation of 4,500 feet. And where the heck is the flat land? :)
I'm guessing Kim will be taking pictures...at least a few.
Good Luck Victoria !!

Wow, Victoria...you are amazing and I'm proud of you. I hope you do well and don't suffer too many discomforts afterward.
BTW, how did you get your photos so large/...they really look nice.

The best of luck to you Victoria. My hat is off ~ I doubt I could run one mile of it. A nice walk sounds better to me! But be sure to let us know how you do.

Good luck on the race this weekend!!!!

I could have sworn I commented on this post, but I don't see it. The photos of your run are really awesome. I am not a runner, so more power to you for doing this!!

I'm just now FINALLY catching up on your blog and so I haven't read how the race went, I can hardly wait. I can't believe what you have put yourself through for this, absolutely amazing. BIG BIG KUDOS!