It's been hinting at blooming for weeks now.

Torturing me.
Luring me outside to check it nearly every day.

One bud.
One lonely, first bud.
Jusssssstttt about ready.
But not quite. Not today. Mayyyyyybbeeee tomorrow.
Check again tomorrow.
Maybe then.


For weeks I've been looking at this: 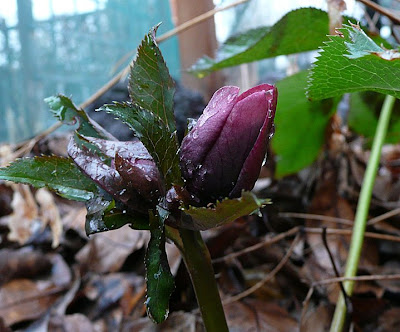 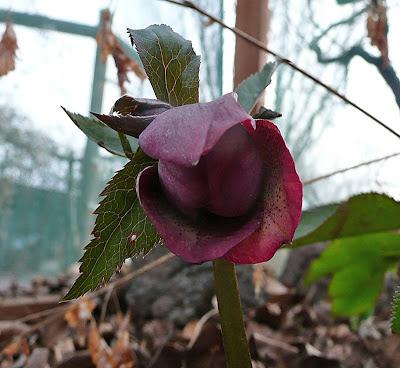 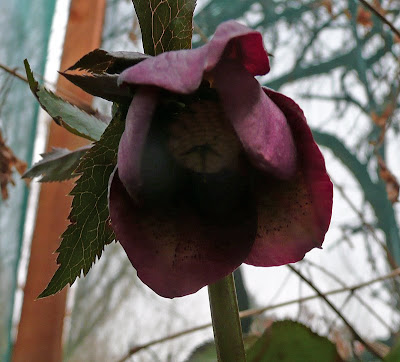 Finally, finally, FINALLY just in time for SPRING, this; 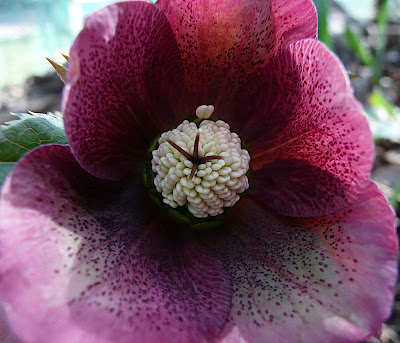 First time our hellebore has shown it's pretty face! (I'm so proud).


I received my two hellebore plants as seedlings from a friend of mine. Hers looks like this: 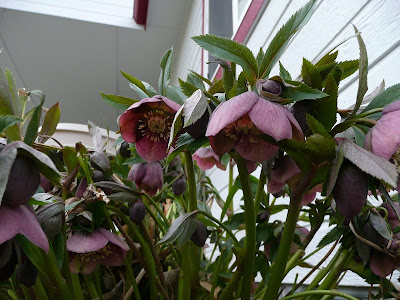 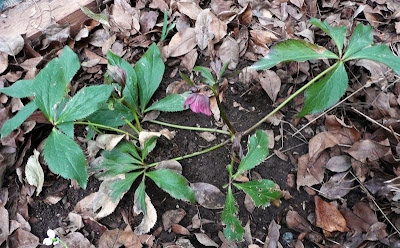 Hellebores have a great botanical reputation. From hellebores.org:

"Sometimes referred to as 'Christmas Rose' or 'Lenten Rose', hellebores are the stars of the late winter/early spring garden. Plants generally bloom between December and March in cultivation, though some begin earlier, and others continue into April and May, particularly in gardens with colder spring climates. Nearly every garden has a spot for hellebores, and the plants will thrive in many different environments."


They are also involved in some legends. From Wikipedia:

"Several legends surround the hellebore; in witchcraft it is believed to have ties to summoning demons.

Helleborus niger is commonly called the Christmas rose, due to an old legend that it sprouted in the snow from the tears of a young girl who had no gift to give the Christ child in Bethlehem.

In Greek mythology, Melampus of Pylos used hellebore to save the daughters of the king of Argos from a madness, induced by Dionysus, that caused them to run naked through the city, crying, weeping, and screaming.

During the Siege of Kirrha in 585 BC, hellebore was reportedly used by the Greek besiegers to poison the city's water supply. The defenders were subsequently so weakened by diarrhea that they were unable to defend the city from assault.

Some historians believe that Alexander the Great died because of a hellebore overdose, when he took it as medication."


If you haven't tried them yet, I highly recommend one. They can be expensive at the nursery, though. See if you can find a friend willing to share a seedling or two, then have patience.

Other hellebore posts you may enjoy:

Garden Girl
Posted by Victoria Williams at 11:18 AM

That was worth waiting for...so pretty! I want to add some to my garden next year.

Wonderful Document - LOVELY COLOR as Always. KITTY TREAT For EBBIE - I love that kitty of yours.

The waiting and teasing finally paid off. Such a beautiful hellebore. I have none yet but I will be getting me one or two.

What a beautiful flower! It was definetely worth the wait!

How apropos to fully bloom on the first day of spring. Gorgeous colour.

Hey it is all up hill from here. Loved your first bloom.

That is a beautiful bloom - worth the waiting, I expect.
Thanks so much for linking to me! I'm glad I found your blog.

i killed one of my hellebore (hellebores?) last year... it's a shame because they are really expensive! are they easy to start from seed? yours is lovely! i have one that's the same color, but it doesn't have spots like that. i'm jealous!

Hooray! They do like to tease us with those buds that seem to take forever to bloom. Your hellebore is a beauty!

Hellebores are one of those flowers I could watch like tv... So beautiful! And one is way better than none (which is what I have. must fix that).

I've never grown hellebores - but they are so dramatic. Thanks for this post. Great pics on your blog, too.

I must admit, I'm jealous. I love my Hellebore but yours is so much... much...well, better!

It's a beauty! I want some of these so desperately but unless I mail order, there are none to be had locally yet. This dark burgundy color is just gorgeous.