We were up late last night, as what began as a simple range fire became a major problem due to high winds.

It started in an open area and we thought it wouldn't be a threat for long. 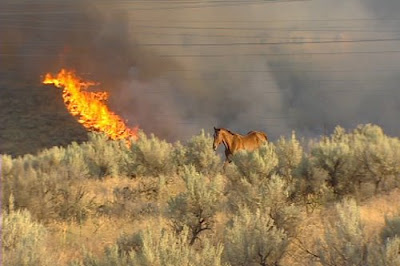 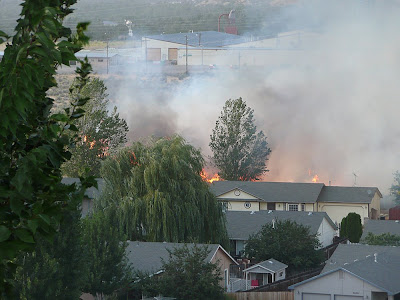 Oddly enough, the houses in the photo above looked as if they were in great danger, but the fire moved on past them, climbed a hill and burned houses that overlook the area. 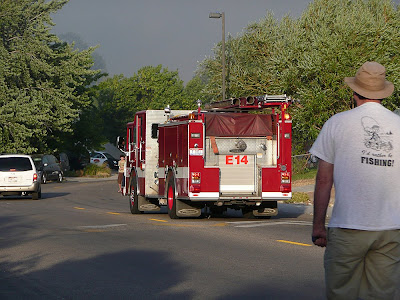 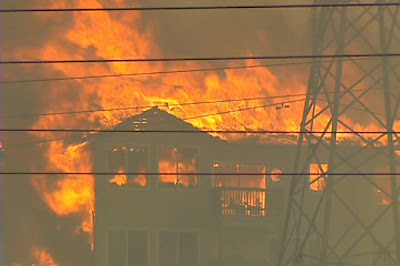 What made us nervous was the close locality. Fifty people were evacuated. No one was injured, luckily enough.

The red x's are where houses burned, the green x is our house. 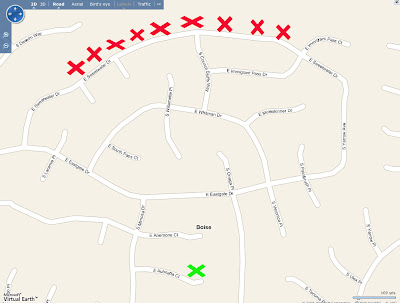 Casey phoned on his way out of town. He's being sent to Utah to work on a fire there, and he heard the news of a fire in Columbia Village. Possibly could have used his help.


Update: One woman has been found dead in her home.
Posted by Victoria Williams at 8:41 AM

Oh , what a scary night.
It certainly looked very close.
Sad to lose a life.

Oh my gosh! I am glad you all are ok, and sad for those that were not as fortunate.

What a close call. I'm so glad that y'all are fine. Fires are scary and unpredictable, they scare me big time. Such sad news about your neighbor.

I'm so so sorry that so many people lost their homes, I'm sorry that Ryder was killed, but I'm extremely grateful that you and your property wasn't harmed!

What was the cause of the fire?
Too dry?

I'm glad that you guys are ok! I had a similar experience when I was living in New Mexico a few years ago, so I know how scary it is. I'm so sorry to hear about your neighbor and how many others had their homes destroyed.

Very scary to see how close that got! I am glad that your house stayed safe.

What city was this in? I'm sorry, I'm a native to Boise, but i lived in Pocatello and Nampa.

PS - They haven't determined the cause of the fire yet. It was fanned by extremely dry conditions, high winds and the shake roofs on the houses.

Amelia - The fire was in Boise; subdivisions of Columbia Village and Oregon Trail Heights.

I remember when they brought her to the morgue. So sad.