Good god.  Sometimes it's just hard, isn't it?  What the hell is going on with google and blogger?
I certainly can't figure it out.

Well, update;  I've quit my knitting podcast.  I've come to the realization that it just is so much work and there are so few people watching.  It's just not worth it to continue.  And I have to wonder why it wasn't more popular.  There I was, standing in front of what I considered beautiful scenery, talking about knitting, a little history, and life in general.  Still couldn't get more than 10 people or so to seem to care.  Maybe 100 people watched each episode.  Maybe.  I have to recognize that the one common denominator in my podcast was......well, me.  Maybe it's my voice.  Maybe it's my demeanor, but my podcast never took off after over two years.  So it's time to face facts and give it up.

What have we been up to?  Mostly watching the snow melt.  Looking forward to warmer days.  Kim has some tomatoes and pepper starts going.

We also attended a memorial for one of our local volunteer firefighters.  She didn't die in the line of duty on a fire, but helping push someone's truck out of the snow.  Not a great way to go in my opinion.  There were a LOT of firefighters from the surrounding area in attendance.  It was a good memorial. 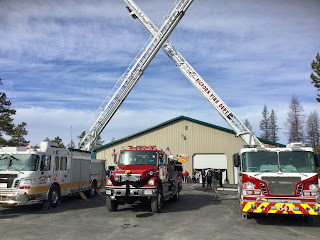 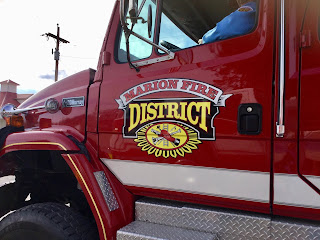 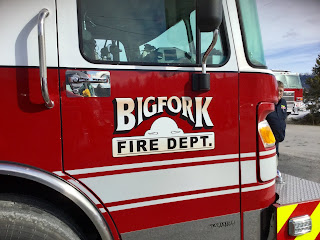 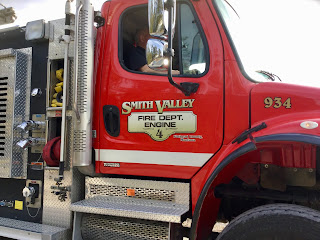 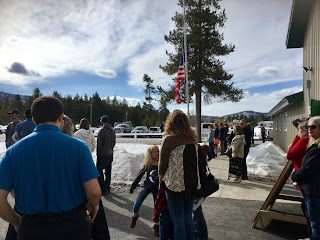 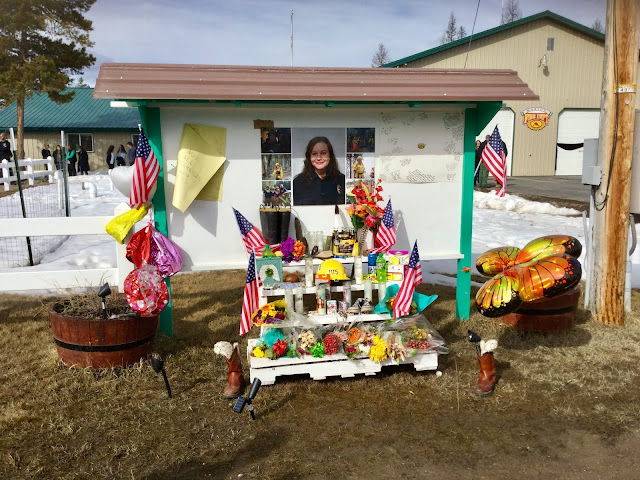 You get the idea.


Then we attended something more fun.  Or maybe not fun, but interesting anyway.  The Lodge at McGregor Lake had their annual chili cook off again.  We'd not attended before but decided to check it out this year. 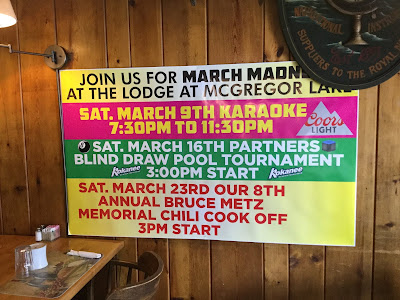 McGregor, as it is known to the locals, is one of those quintessential Montana bars and grills that you would love to visit while here. 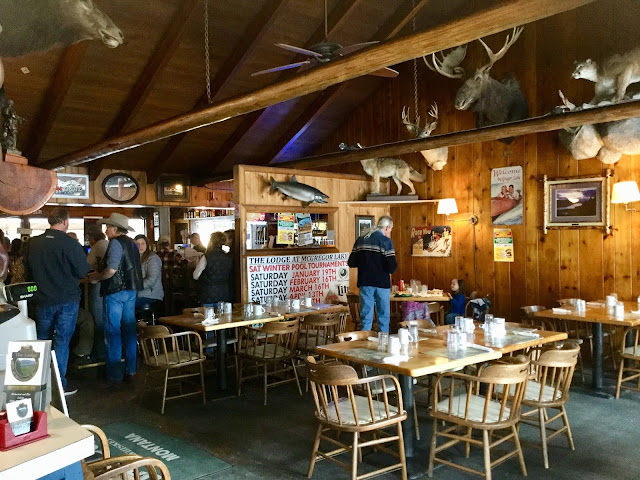 Loaded with stuffed game on the walls of course. 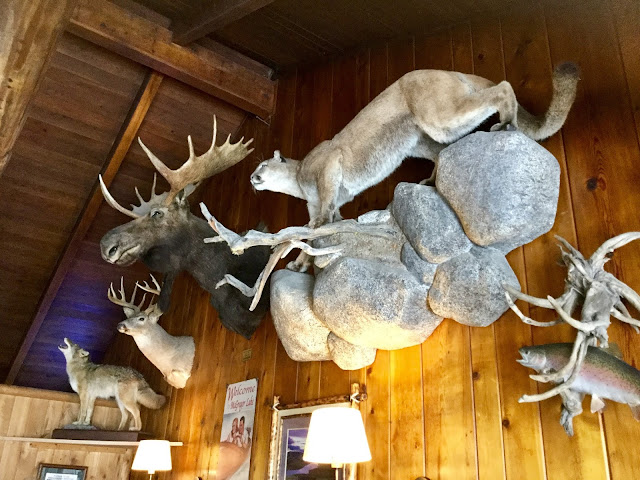 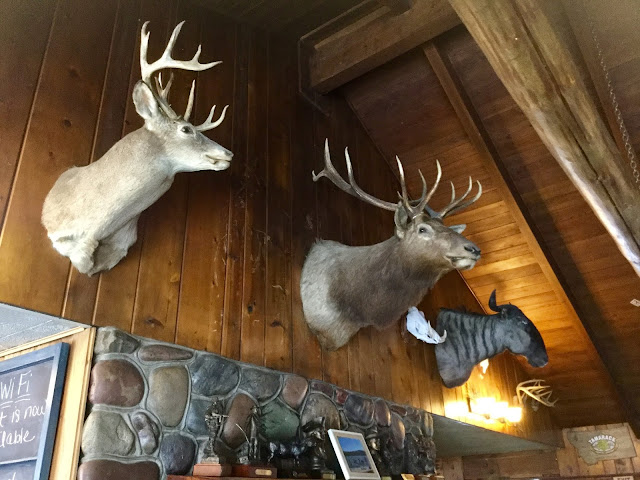 It's a popular event. 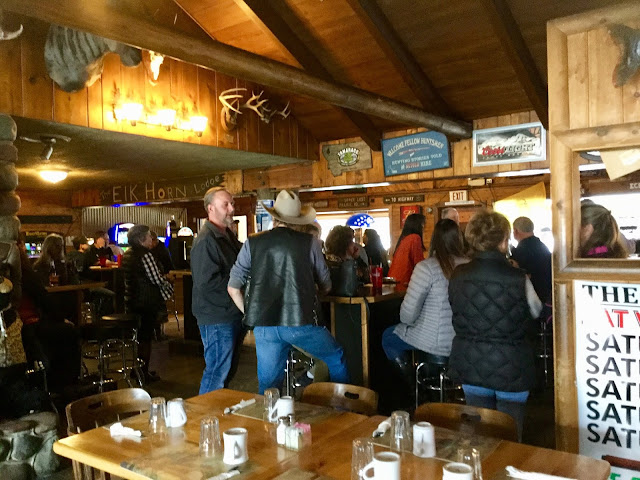 Folks make their chili in crockpots then bring it in on contest day to be judged by the three judges.  Who take their time at it, about 45 minutes to be exact.  They announce winners in traditional and non-traditional categories and then by paying $3 you can eat all the chili you like.  Along with cornbread.
But don't expect to know what's IN the crockpots of chili.  You could be eating practically anything.
When Kim went to get some (I didn't participate, I sincerely doubted they would offer a vegetarian version, and besides, how would I know?)  there were rumors that a certain crockpot contained cougar meat.  Not something I would appreciate.  So if you have allergies or serious food preferences, this is not the meal for you.  Your typical small town event. 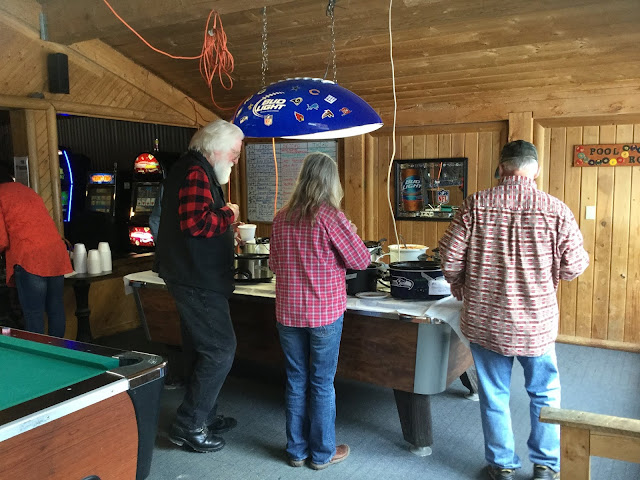 The crockpots of chili were set on one of the pool tables.  They were labeled with a number, and then after the judging, the name of the maker.  That's it.  No "contains venison" or "contains shit you wouldn't touch with a ten foot pole".

Posted by Victoria Williams at 9:04 AM

Yeah, what is up with Blogger? That chili contest sounds like a hoot, but I'd be wary of ingredients.

Hi Victoria,
I didn't know you had a blog! I am sorry that you decided not to podcast anymore. I get it though. I have to say yours was my favorite. I loved the Beautiful Montana and more importantly you! We've talked about the "why" of the "success" of our podcasts.
Anyway, I hope you keep up with the blog. I like knowing you are okay. :)
I'm not surprised that you decided to pass on the chili. :)

I’m �� so sad, but I understand. I have about 10 viewers that care and participate. I’m just relieved to know you are all okay. I have been trying to find you, and was worried something happened to you. I got the self striping yarn in from Biscotte, if you still want it. I’m going to miss seeing you, and your beautiful Montana. Please get in touch if it’s not too painfull. I would love to stay in touch.

Hi Victoria this is Sue (Lynda’s friend) we have spoken once before on a podcast. I’m so sorry to hear you are leaving. I’ve always enjoyed your podcast finding out about Montana and all beautiful surrounding areas. I don’t subscribe to podcast haven’t really figured it out. I haven’t missed one of yours always entertaining. I love the things you have made especially the interesting color choices. Always nice to see your family and especially your grandchildren. They are adorable. I will miss your road trips. I am sorry to see you leaving I’m sure you will be missed. Take care! Hope this comment isn’t a repeat I wrote one but didn’t think you received it. Guess two might be better then none. Lol
Take care Victoria!

Thanks Sue. I’ll miss my podcast too. I just can’t seem to keep going with it right now.