Fun With A Fake Baby

My daughter's baby shower took place this past week.  The food and drink were excellent. 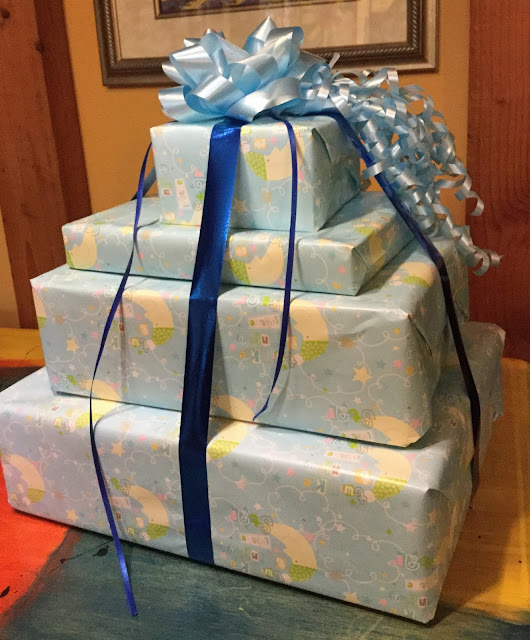 As part of the entertainment I created a photo cut out board.  Here's how I did it.
You need a board.
Fortunately my husband had a usable board in our garage.  It was around 40 x 49".
I found a cartoon looking baby using google and traced out the body on newspaper. 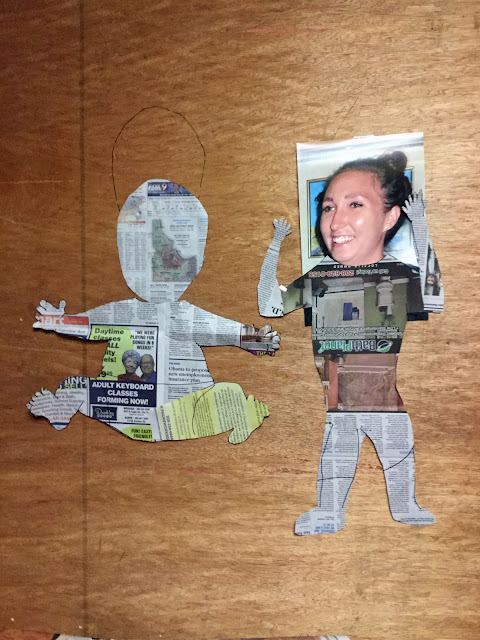 I had a photo made of my daughter's head (11 x 14") at our local store.  I'm not an artist, I knew I would never be able to paint a head that resembled her at all.

I messed around with these two figures until I felt I had them located correctly on the board.  Make sure you keep them close together, mine could have been closer.  If your board is larger you have more room to work with, but you want the final photos to not show the edges of the board if possible.

Some people use an old halloween mask to measure for the hole for the head, I just guesstimated.
Be sure to sand well around the opening so no one gets splinters when they put their head through. 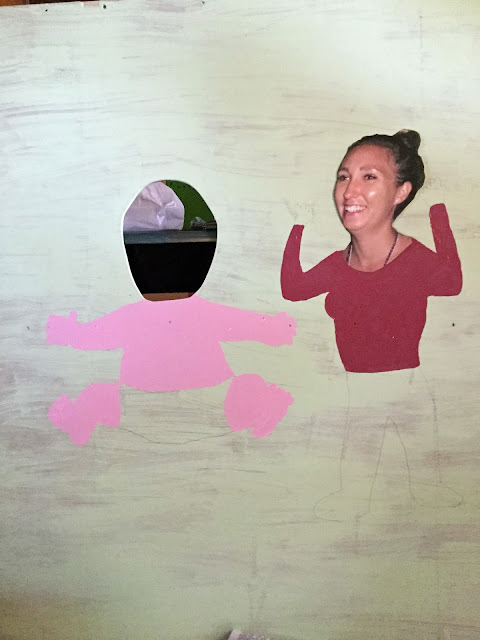 I painted the background first with some old paint we had around the house.  It was OK that it needed a second coat and didn't get one.  I traced around my newspaper cutouts and filled in with craft paint. 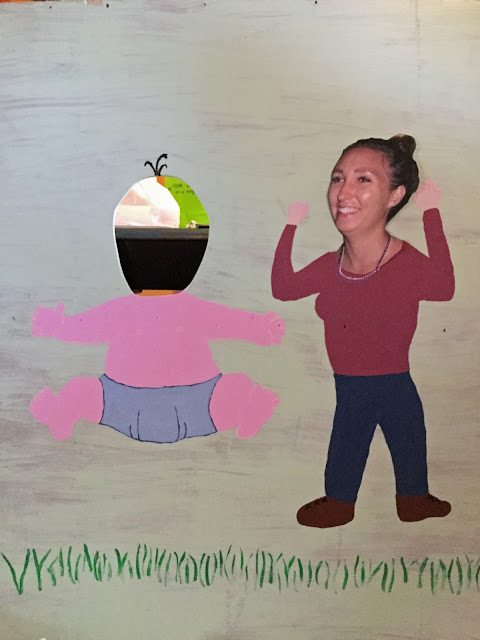 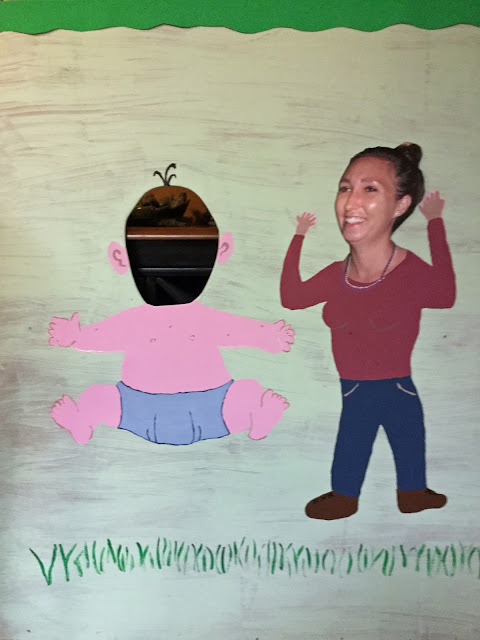 I added a little tuft of hair on top of his head, some rough grass to anchor them a bit, and a paper edging to finish off the rough top of the board a bit.

We did notice that when we were taking practice photos my daughters hands didn't stand out enough so I darkened them.

Next I started making clothes for her baby.

The first thing I realized was that I had "painted outside the lines" of his body and so when I used my original newspaper cutout to create the first outfit for him it was too small.  So watch for that.

I made seven outfits, then realized I had room for a little "bubble thought" for him, and I made quite a few of those.  I also left some blank for her guests to fill in with their own sayings, which they did. 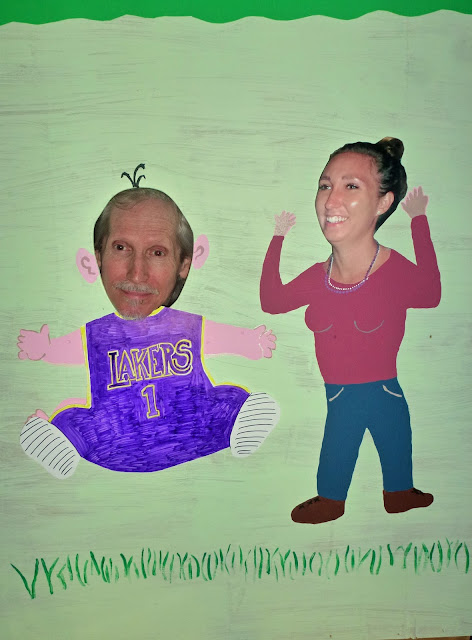 My son-in-law is a huge Lakers fan, so of course I had to make a Lakers outfit.  You can see where it isn't quite covering the baby's body.  I left large "paper doll" like tabs at the top of each outfit to fit across the head hole but most of them still needed assistance staying in place with some tape.  If I had to do it over I'd probably make the clothes larger or paint the body smaller.

Tip:  the white and colored poster boards are a good buy at the dollar store.  Markers are NOT.

I put up a sign near the board which read, "Why does Vanessa throw up her arms when she sees her baby?  Use the props to show your theory." 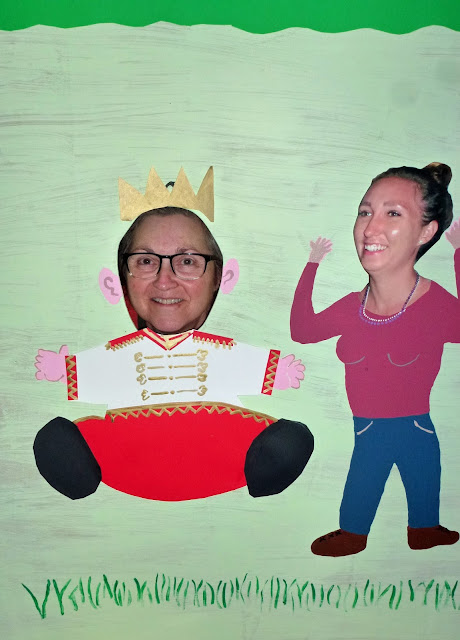 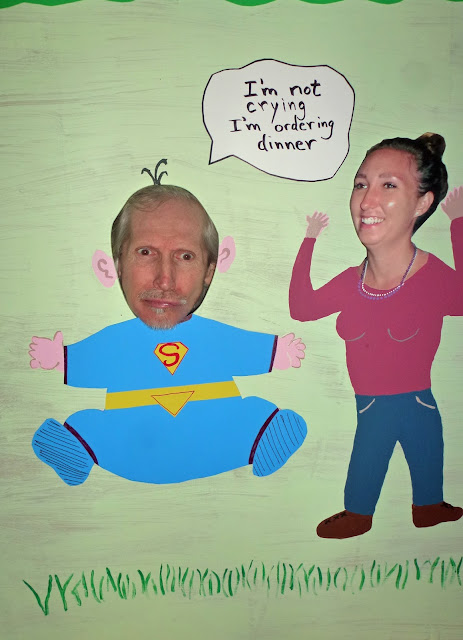 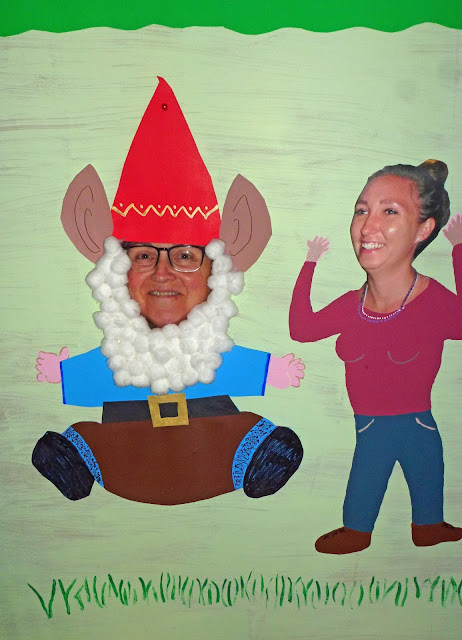 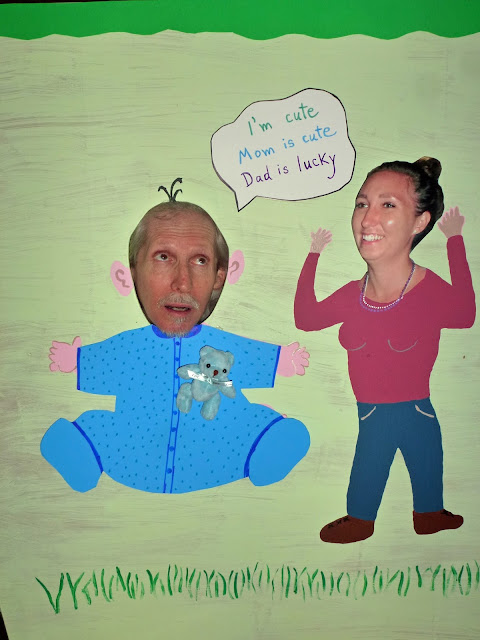 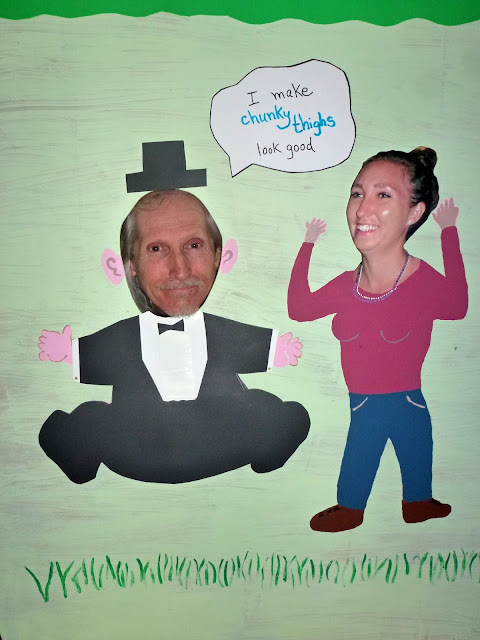 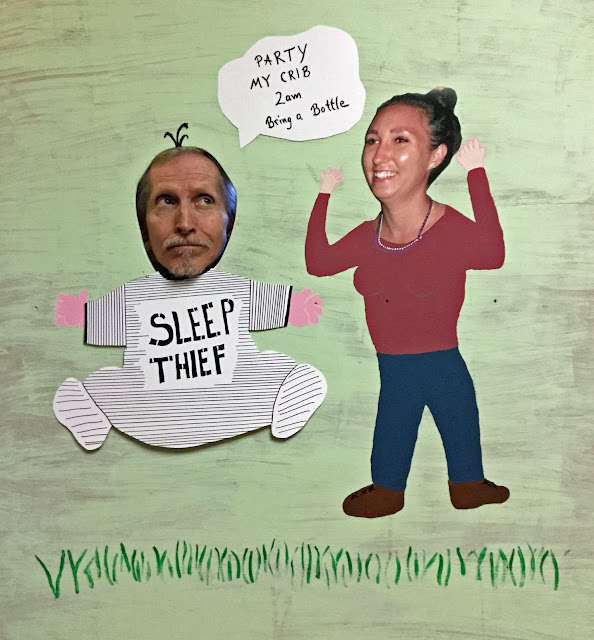 My daughter created an Instagram hashtag for the pictures.  Most people took pictures with their phones.  I wish I had taken pictures of everyone who used it because most guests didn't hashtag their photos.  A good idea would also be polaroids for guests to take home a photo.

Kim added some legs on the back so the board would stand up.  Lucky for us a very sturdy, very narrow table was available to set up the board on.  I had also purchased some props such as fake mustaches, funny glasses with attached nose and mustache, pacifiers, cool sunglasses, etc.

We spent about one week working on this project.  I would say it was well worth it.

Posted by Victoria Williams at 6:05 AM

That is so cute. And clever. It's been eons since I've been to a baby shower. Congrats to you and your family.

You crazy lady ! That was fun. After seeing what you went through to create this ...well you have to be very satisfied. Congrats Grand Mom !!!!