I hope everyone's Christmas/Holidays were great.  You'll have to forgive me, we just had our "official" Christmas dinner December 30 so I'm still in "the mood".

I notice I've been ignoring my blog (and everyone else's) lately.  I hope everyone else is doing the same.  As the holiday season swells and then ebbs I plan on getting back into the flow of following my online friends.

I started off our Christmas dinner with two appetizers because my son, Casey, is always ready to eat when he walks in the door.  (He's a fitness buff and is always looking for food.  He's one of those annoying people who are happy when they put weight on.)

First:  Prosciutto Rolls with Arugula and Figs.  Pretty easy.  Just make sure, as the recipe says, that you don't get the prosciutto sliced too thinly.  I had to use toothpicks to keep mine together but that didn't seem to matter.  I think these would also be good without the prosciutto;  if your arugula leaves are large enough you could smear the cheese mixture directly on the leaves, then sprinkle on the figs and lemon dressing.  I tried one this way and thought it was great. 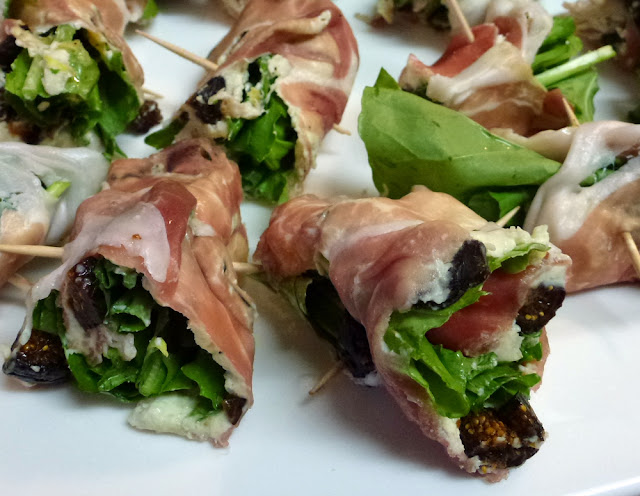 Second up:  Baked Goat Cheese with Roasted Garlic and Caramelized Onion.  This is basically a dip you serve warm with veggies, bread or crackers for dipping.
I also liked this one.  It can be prepared partially in advance then slipped into the oven when your guests arrive.  One change I made is to mince the onion, not slice it.  When it is sliced the onion tends to pull up from the dip in something that looks stringy, not attractive at all.  This doesn't deserve a photo but here is the recipe.

Our main meat course was Pork Crown Roast, again. You can find the recipe (and picture) for it here.
This is one of my favorites to serve (even though I don't eat it) because it serves a crowd well and is easy to prepare and cook.  Also it turns out very pretty and it's also simple to carve;  you just slice the chops and voila!

To accompany the roast I went with  Sweet Potato Roulade.  Everyone liked this and most of us had second helpings, always a good sign.  Don't worry if your roulade splits in places when you unroll/roll it back up at the end.  Just press those spots together using the filling as a sort of "glue" and probably no one will even notice.

My one complaint with this is that I thought it looked a little plain, maybe just a tad unappetizing.  Maybe next time I'll use yams instead of sweet potatoes, the brighter color might help.  I used the Edam cheese called for in the recipe but I think any shredded cheese would do.  I also didn't go to the bother with whole allspice berries and used ground instead. 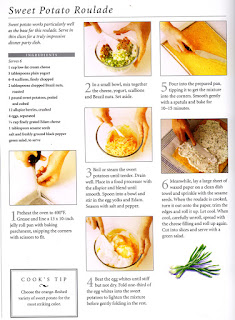 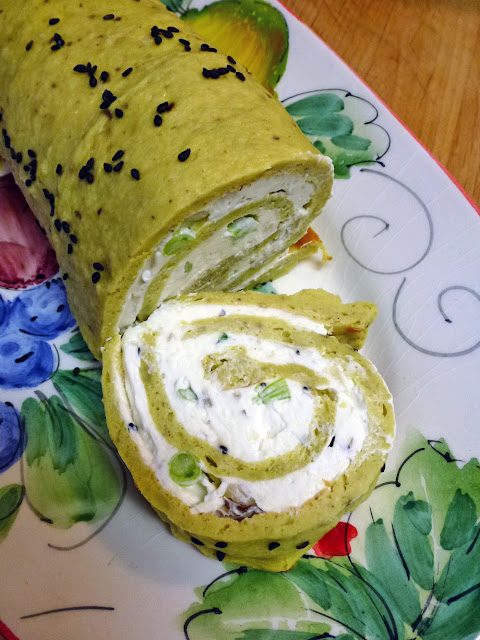 That brings us to dessert.  And if you know me, you know I always make two!

The chocolate one:  Chocolate Cranberry Poinsettia Cakes.  I wanted these to be small individual sized cakes.  I managed to make them too large.  Sigh.  Oh well, there's always next time.  I should have made them closer to petite four size, which would have involved cutting my layers in halves.  Anyhow....these were tasty, the cranberry filling and chocolate ganache-type frosting really makes the cake.  But they were just too big for one person, each couple ended up sharing one cake each. 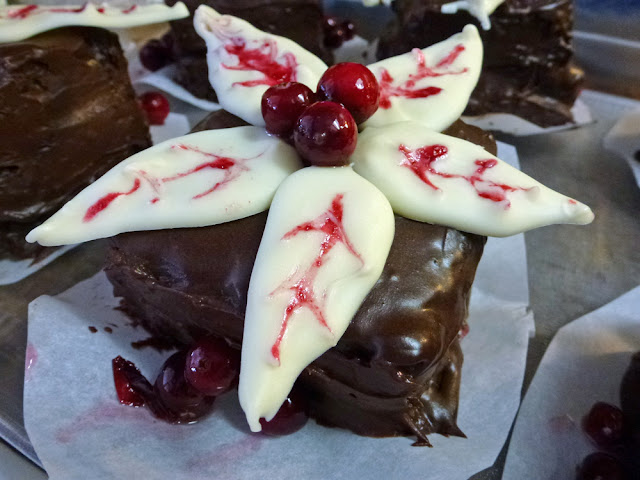 I made the white chocolate leaves called for in the recipe but couldn't locate any lemon leaves (I didn't look real hard) so I used a (new, clean) small paint brush and free-handed mine.  They turned out OK as long as you don't compare them to the ones in the recipe.

I made six.  And yes, I ran out of leaves.  The middle one on the left is the best looking.  I stopped trying to stack my leaves at that point.  Stacking them as they appear in the recipe photo just didn't work.  Gotta go with what works.  I was happy enough with these. 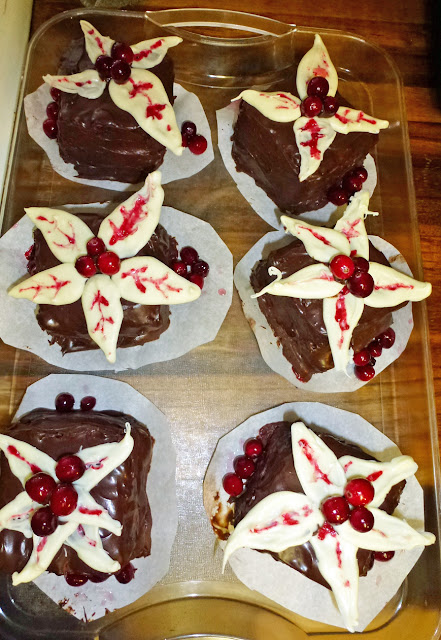 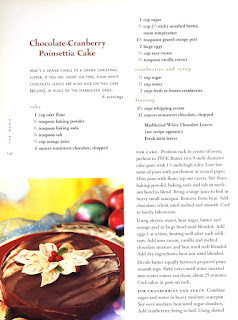 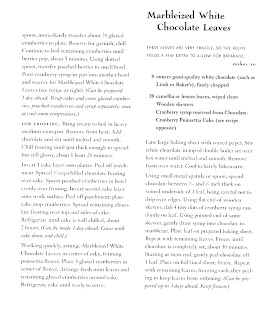 The non-chocolate one:  Poached Pears in Red Wine Sauce.  I think this one was everyone's favorite.  After a heavy dinner this dessert seemed light and refreshing.  What I liked about it;  most of it can be made the day before since it is served chilled.  Be careful not to cook the sauce too long when you're at the part of reducing the sauce.  I did and had to warm it up to bring it to a liquid again for pouring on the pears at the end.  I also planned on just one half pear per person so I cut them in half and cut out the core before serving.  I left one whole to stand up and look pretty. 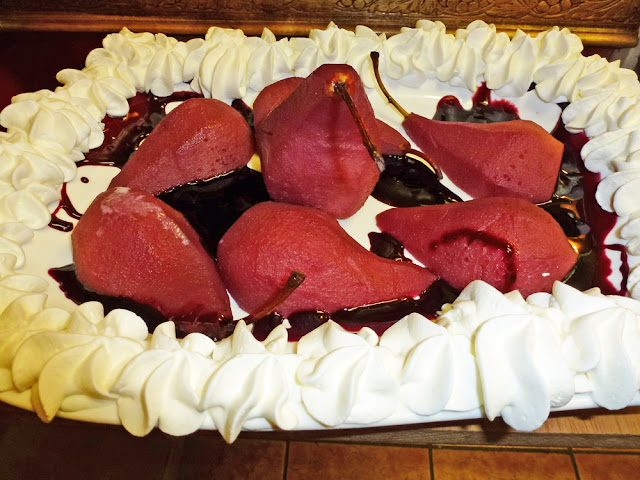 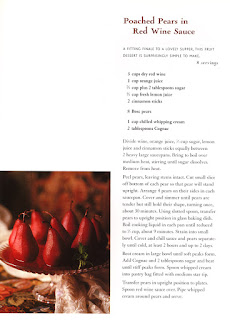 One more recipe to mention.  On Christmas day I made Phyllo-wrapped Salmon with Leeks and Red Bell Peppers for Kim and I.  We both just loved this.  Kim had the inspiration to use simple blue cheese dressing as a final dipping sauce for the salmon and it was the perfect touch.  I didn't take a photo but here's the recipe. 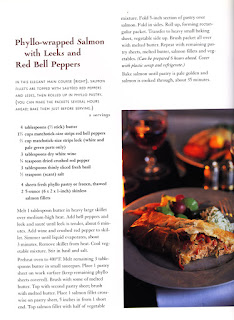 Kim and I made it to see the lights at the Idaho Botanical Garden.  Always worth the trip. 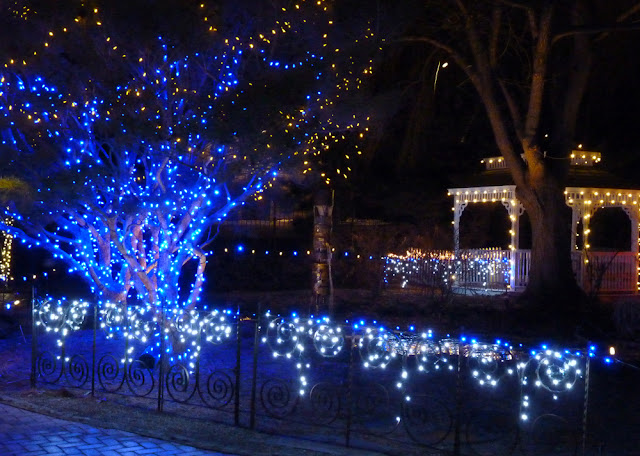 And all of us at dinner.  It was great.  I love my family. 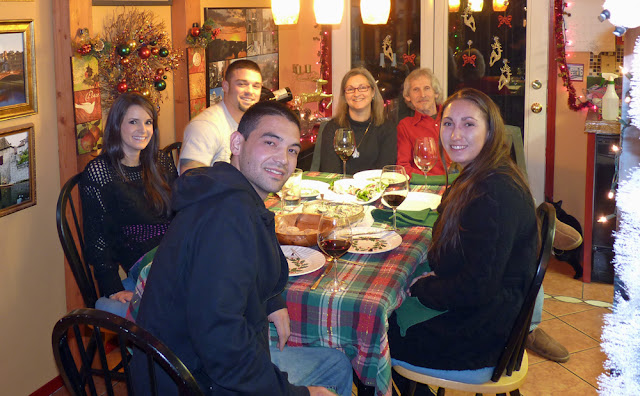 Posted by Victoria Williams at 4:33 PM

Thanks for sharing the recipes. The pear one sounds especially good. I'm glad you and yours had a nice Christmas and holidays. Here's to the weather warming up a bit!

We also went to the Botanical gardens - it was magical!

I also ignored blogging during November and December. Your recipes look amazing. I'd love to have time to do fancier dishes, but mine are pretty plain. My son's birthday is Dec. 24 and he likes homemade gnocchi, which takes forever. That's the extent of my "special" holiday dinner!

As usual all your recipes look so good...... 2 Desserts , in particular.. chocolate anything..I too have been lax on blogging and am trying to do better.as well.

Everything looks beautiful and delicious. Love the Prosciutto Rolls - we still have some arugula growing outside. This would be a good recipe to try with some of it!