Who would ever think these three sweet little hens would encounter such problems integrating with our three year old hens?  Well, I wouldn't have guessed it.

But as you can see from the following pictures things did not progress smoothly.

We had been keeping them all separate and only getting them together through a fence at first, then letting them free range together during the day.  Things seemed to be going OK.  The three young hens spent two nights in the coop with the big girls before this happened.

This was Hazel's head on the first day of the injury.
Gross, huh? 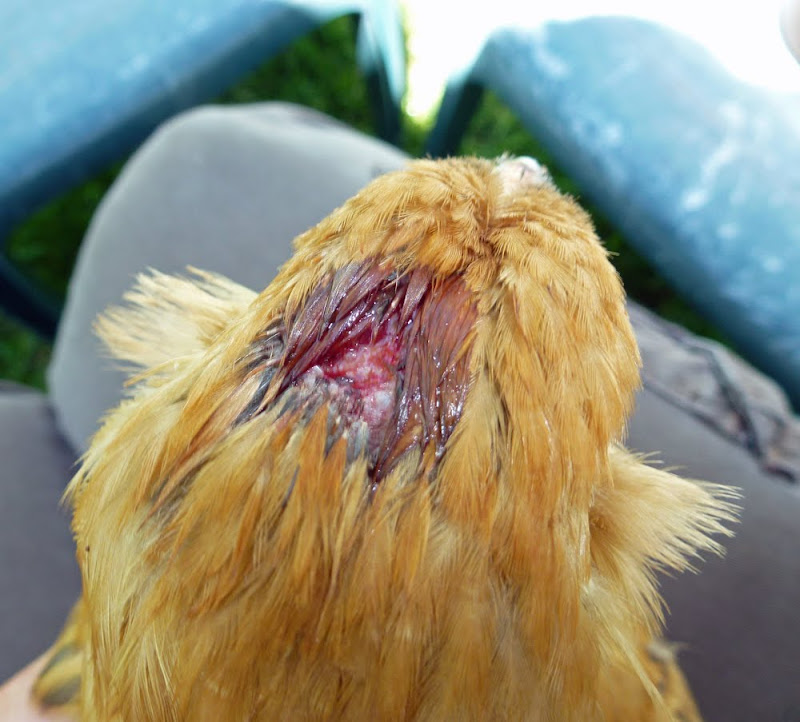 We tried to integrate all six hens when the younger hens were around 8 weeks old.
Turns out no one was ready.

This is day two.  Per internet advice  I treated her wound with hydrogen peroxide and a "tea" of iodine and water.  I couldn't find the Furox suggested so I sprayed the wound with a protective second skin solution. 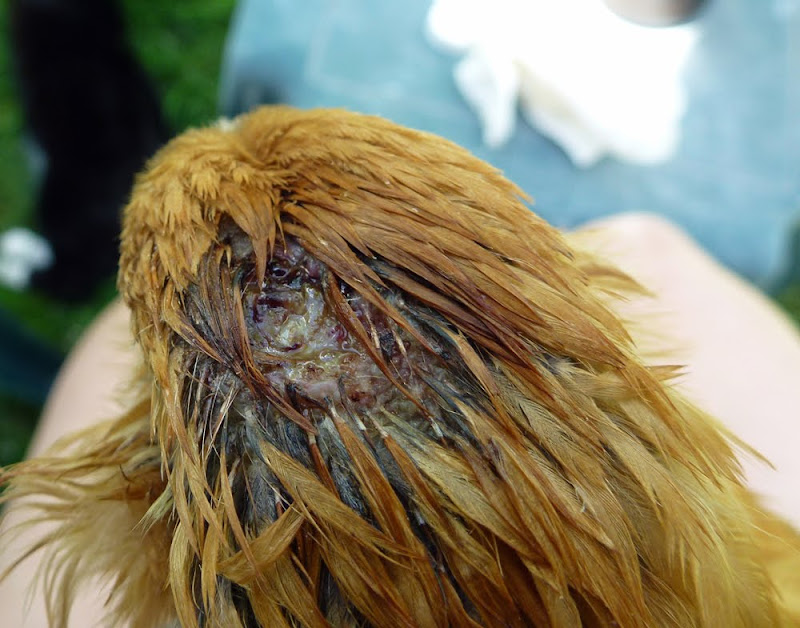 I thought the wound looked pretty nasty but it continued to improve every day. 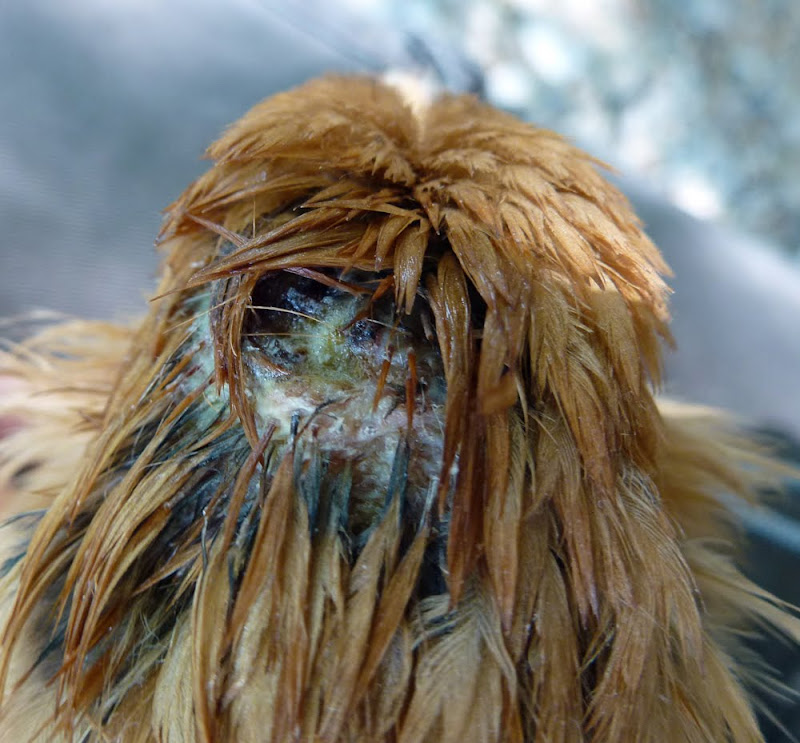 It was very possibly overkill on my part (Kim said I was probably the only person who would spend $12 to treat a $2 hen, but, well, that's what you do and he agreed.)

After the injury Kim put in a "room divider" so they could all stay in the coop but with their own area, keeping the two groups apart.  During the day we allowed them all to free range together in the area behind the garage with the compost piles.  This went on for about a month.   Finally one night when we went to shut both coop doors, (because Kim had to install a separate door), the young hens were roosting with the big girls instead of in their private quarters. 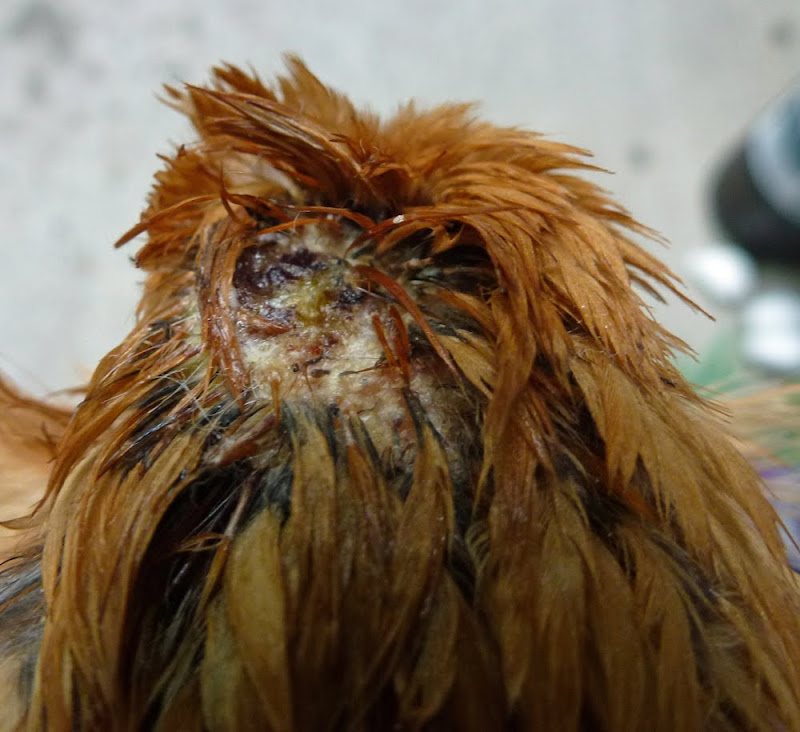 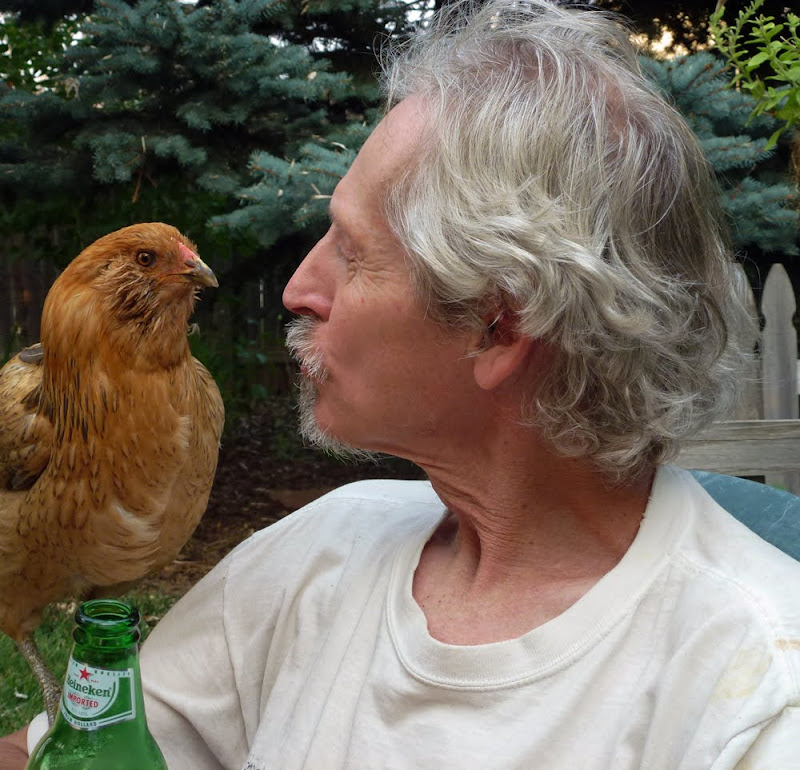 They've been together about a week now with just the occasional "bloody nose."  Nothing serious.

I guess it's best to leave it up to the ones who know.

The three young ones in the "big girls coop".  They don't get the "prime" roosting spots, but they do have one.  (Tootsie, our largest hen, is now spending her nights in the nesting box.  I think she must be getting too old to get on the tall roost she used to call her own.  Which is a whole other issue.....aging hens.  Sigh.) 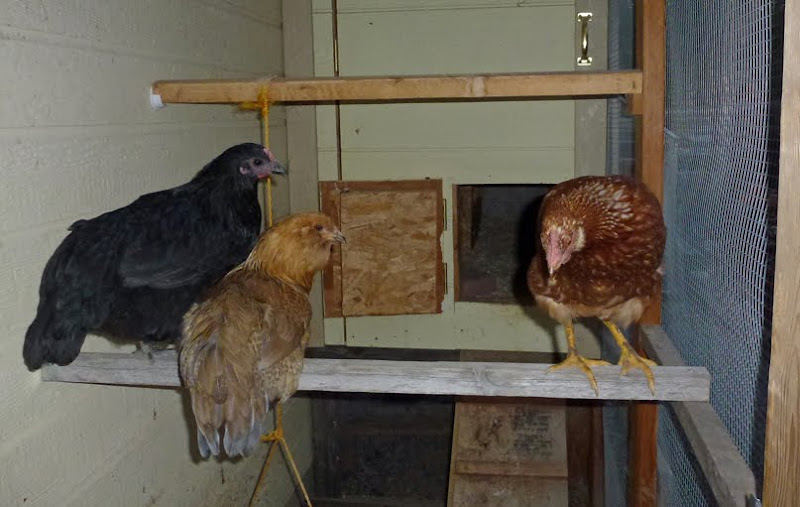 Here they are checking Frankie out. 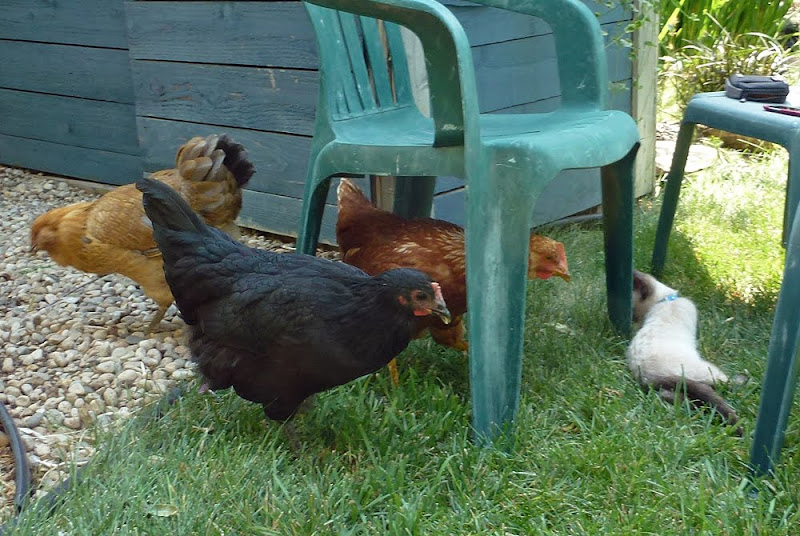 When I would tell friends about being surprised that Ginger is being the meanest hen to the little ones no one was surprised but me.  They all thought it made sense since she has had to put up with being the lowliest hen, now it's her turn to show someone who's boss.

By the way, this is the gate that separates the coop/run area from our garden.
Ginger flies over this fence every day.  (Kim is 6 feet tall).  And we have watched Ginger risk life and limb by "crab walking" along the top of the fence between us and the neighbor's house (who have a black lab) in order to reach the lushness of our back garden.
She really is one determined chicken.

She's also the only one of our chickens who can make it over that fence. 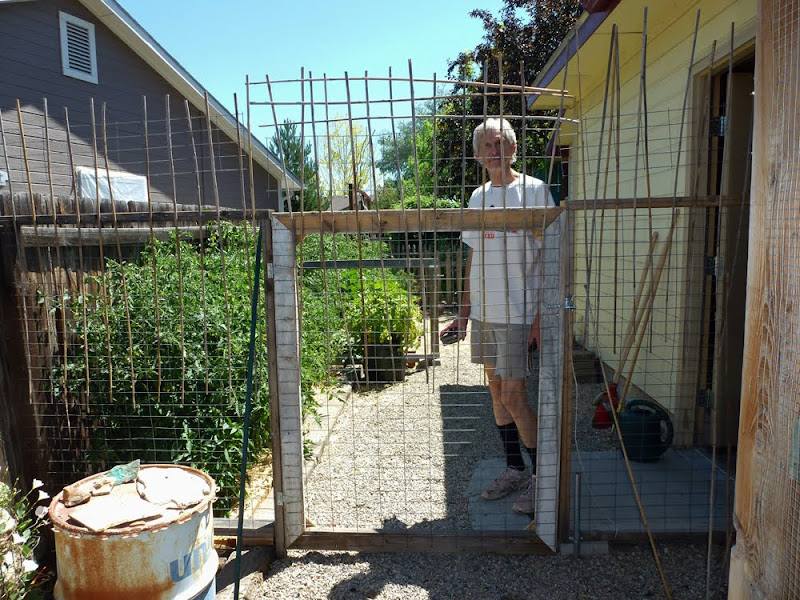 The three young hens are 18 weeks old now.  We're not sure if they've started laying yet but we have had a couple of very small eggs that make us suspicious. 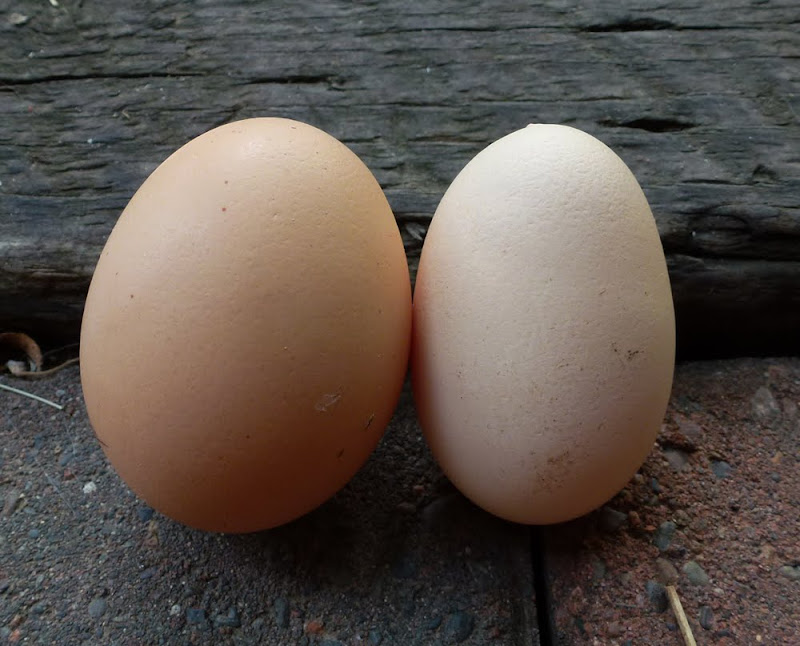 Posted by Victoria Williams at 3:08 PM

Certainly your life is never boring.... Love those fresh eggs!

The gals are jealous I guess. That looks pretty nasty.

That's a fun story. They sure make life interesting.

How very interesting! I can't believe the process it's been. When I visited your garden I remember Kim saying the big girls and little girls were in separate areas. You've achieved success though through perseverance and patience. Very good for all!

I'm thinking there could be a reality TV show there. Do you think Ginger would put up with being in 3 different dresses in one day? Glad the head wound healed so well - must be a very healthy girl. I'm wondering if it's the beer?
B

Despite the drama I really miss having chickens. I love this post.