Hard to believe it's July already. Seems like everyone was talking about "June this" and "June that" and now it's turning into "July this and that".

The garden is moving along fast now.

The impatiens are doing well this year in the containers on the back porch. This one looks as if it is a hosta bloom. 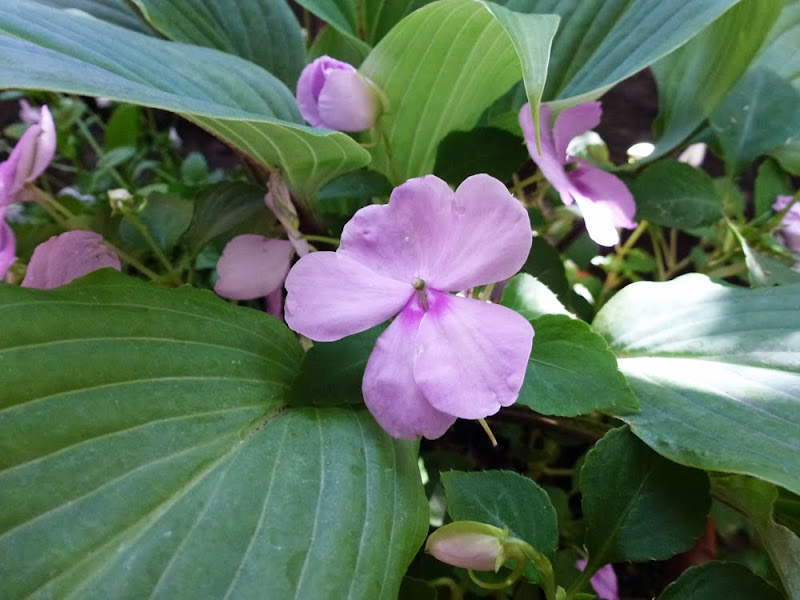 But of course it isn't. 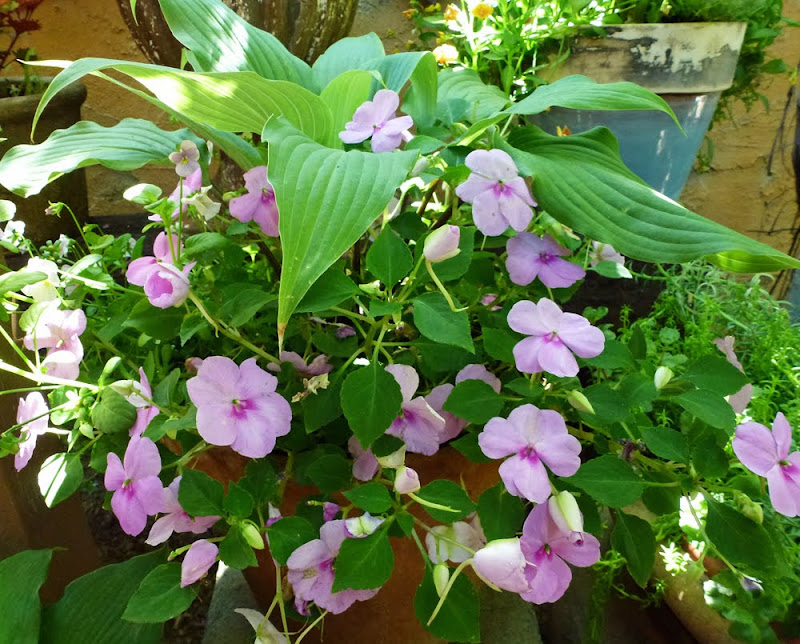 Who says red and orange don't go together? Mother Nature says they do. 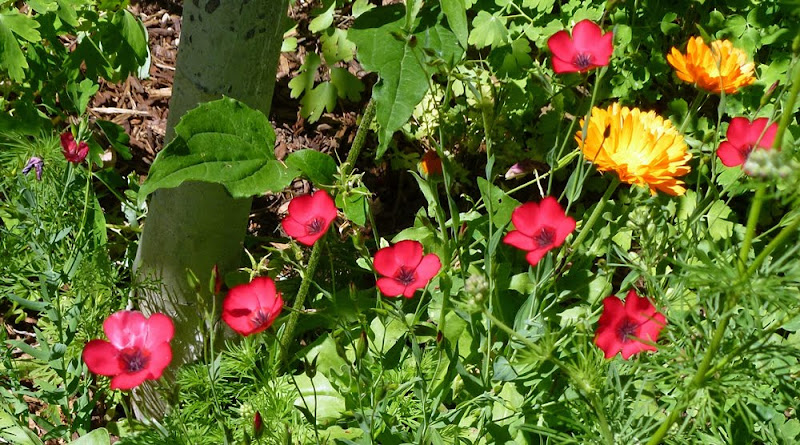 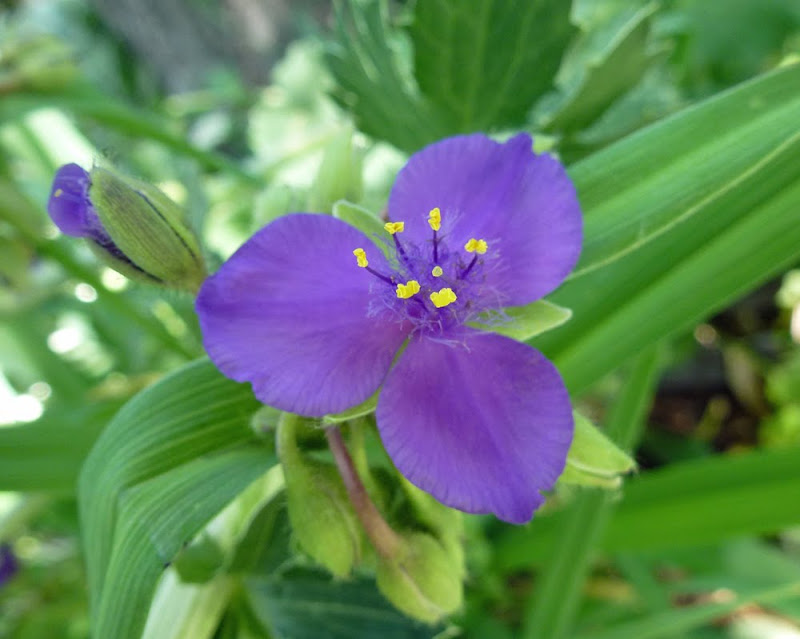 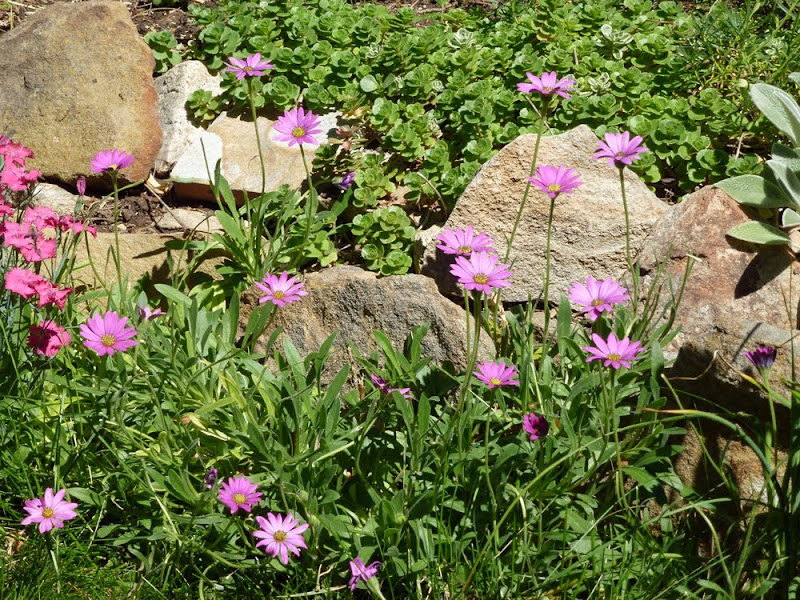 And since it's July, lilies are coming into bloom. This one is Lilium 'Royal Sunset'. I can't remember the name of this one and the tag is gone. 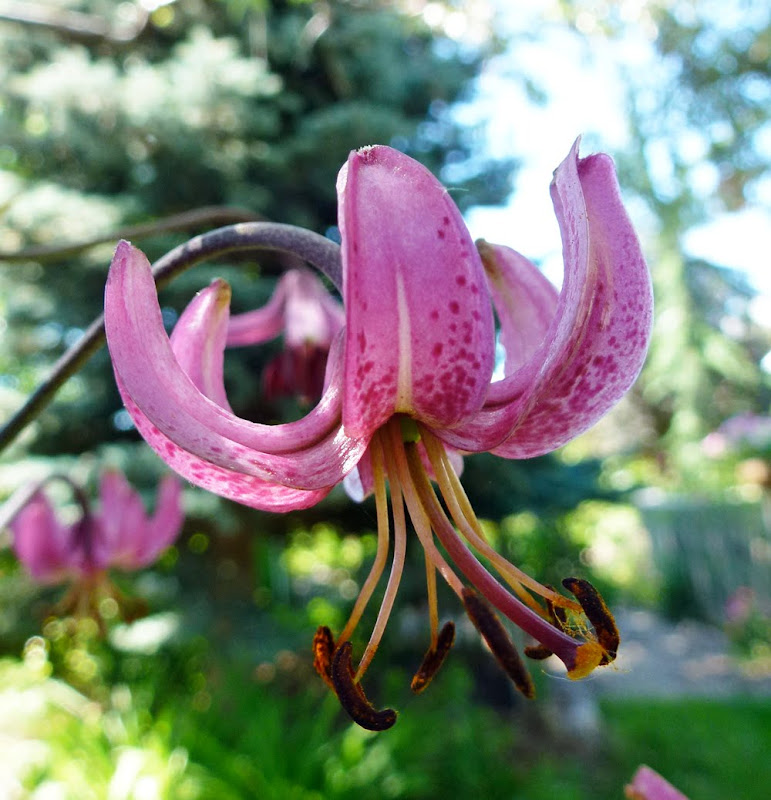 But it's a tiny thing on a stalk of them. Some type of martagon I think. 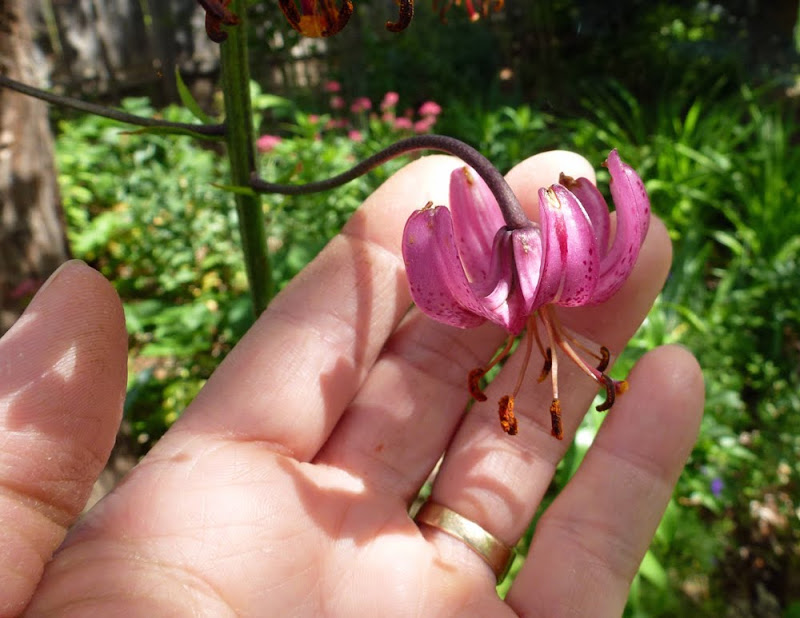 The craziness of the garden in July doesn't bother me.
Here we have perennial pink sweet peas, lychnis - upper right, Tuscawilla Tigress daylily just starting to bloom in the far upper right, sedum in the center, rudbeckias on the left and coreopsis at the bottom.
Late August I'll be singing another tune and ripping stuff down. 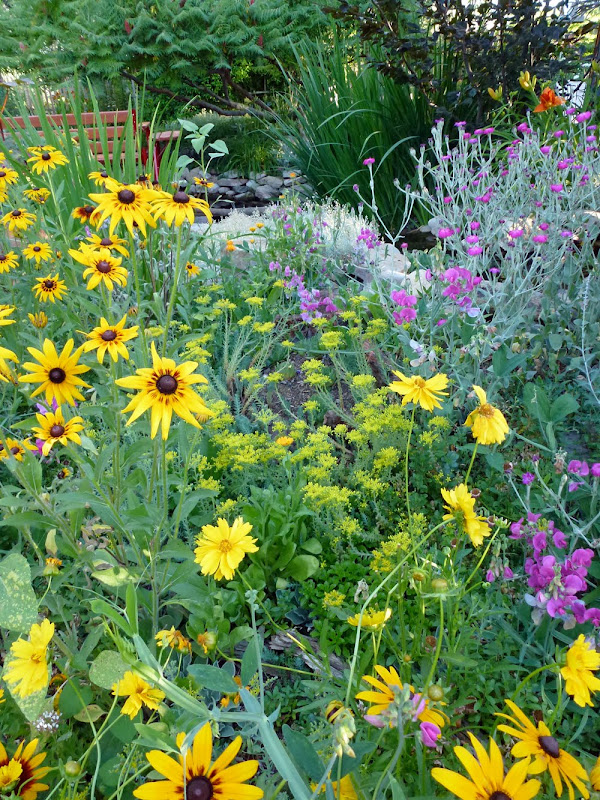 These annual snapdragons are reblooming after I deadheaded them. 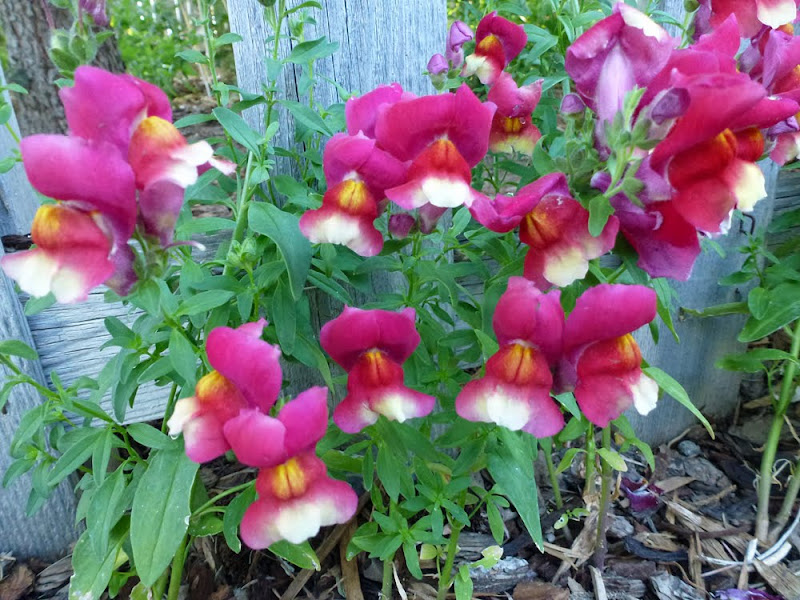 And the heleniums are blooming. This is "Mardi Gras". 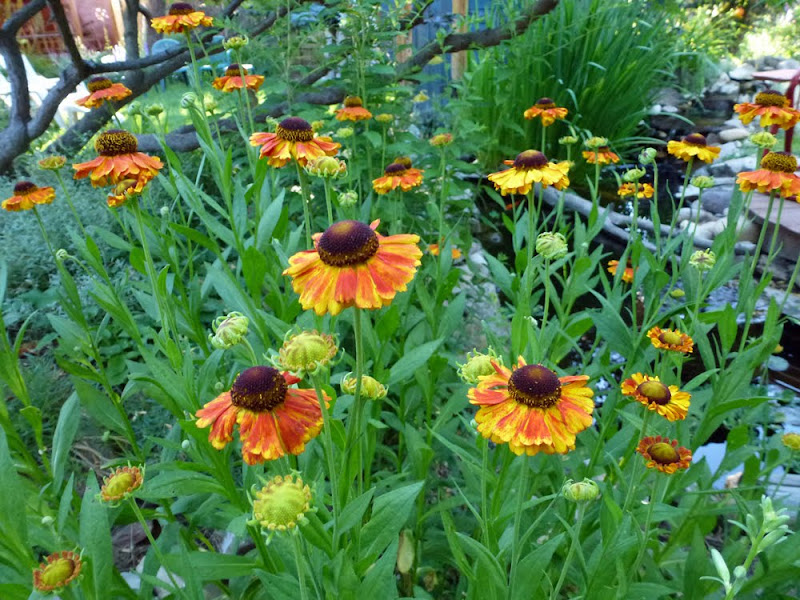 Three spoiled hens. They're growing fast. But not fast enough. Still having trouble integrating them with the older hens. 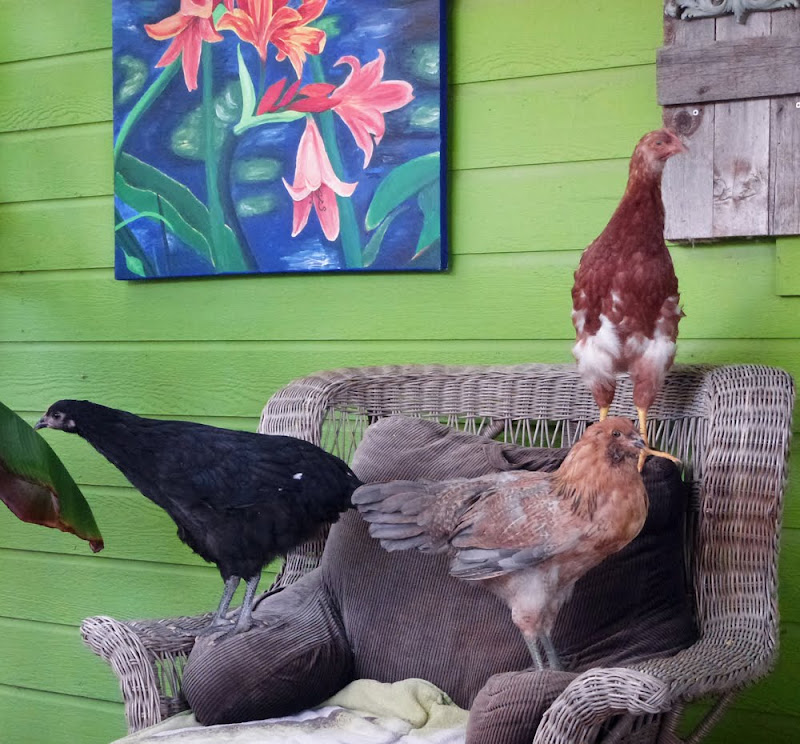 And still working on adopting out these kittens. This is how we often find our computer chair, covered with furry little things.
(We might actually be keeping the gray one.) 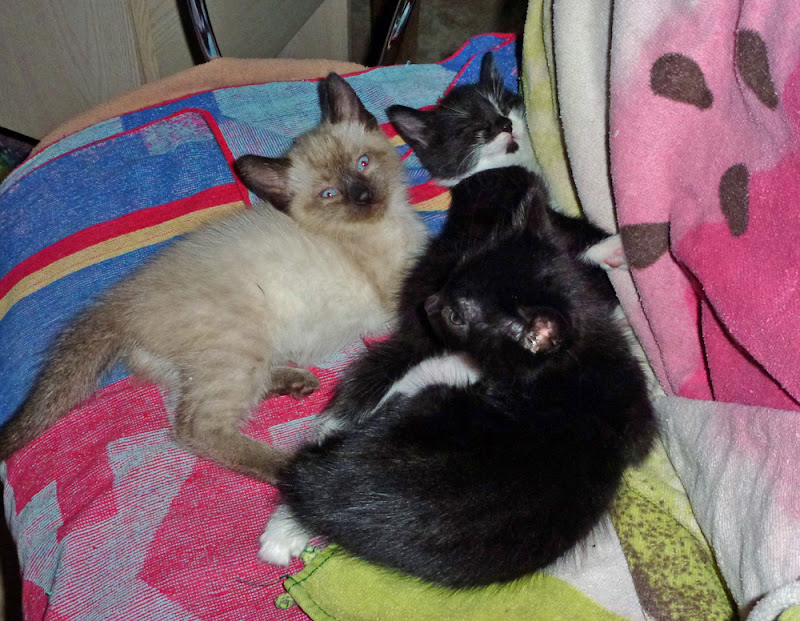 Just yesterday Kim saw another mother cat with four kittens in the garden. This group will have to be captured and taken to the pound I'm afraid. We can't rescue them all. If this isn't an advertisement for neutering, I don't know what is.

Update: I called the pound and was informed that if we bring in feral cats they won't be adopted, they'll all be euthanized. So we've decided to try to capture them all, have the Mom spayed and bring her home, and tame the kittens for adopting out. I'll let you know how that plan plays out.
Posted by Victoria Williams at 10:53 AM

I love that tiny lily! The girls look to be growing nicely.

Your garden is looking so beautiful. I love your heleniums. So pretty. Looks like all of your seats are taken. LOL!

It is just tragic when poor mama feral cats have babies. I hope you can capture them and take them to the shelter where they'll be lovingly tended. Your babies are so sweet!

And your garden is amazing. Such beauty. That lily is so sweet.

I can't believe it's July either. Time just whizzes by...

Wow your garden is attracting a LOT of cats & kittens this year! Maybe they recognize a kind hearted person lives there? The kittens are adorable ~ it's good they don't show up here ~ I'd want to keep them all!

Sorry your girls are still not getting along. I hope they'll eventually work it out.

So funny about what looks good now versus in August! I do the same thing. It starts looking "tired" about then and I have to do something about it!
Hope you have a good 4th. A bbq in your gorgeous garden would be awesome!

poor kitties...i wish i wasn't allergic, i'd take one off your hands. your flowers are looking fabulous as always.

Your garden is a riot of colour.. Beautiful. Good luck on the kittens.....

I have Helenium Mardi Gras too. Love it!! Such cute kitties, hope it works out well for them.

The heleniums you gave me last year are absolutely Stunning right now. I've had my hands full - no time for blogging lately, but sure enjoy yours!