I know you've all seen many a post about our "girls" (hens). They've reached their second birthdays this year. Kim and I have been very lucky (or the girls have been lucky I guess), no illness, injury or deaths with our girls during these two years.

Yesterday I thought our luck had run out. We've banned them from the back yard this year in order to allow the garden to recuperate. They've been confined to the area behind the garage where their coop sits, with access to the three compost bins and plenty of area in which to run around.

Seems as if Ginger wasn't satisfied with that arrangement. I went outside to give them some greens yesterday and as I was counting heads I could only count to two. Wrong, wrong, wrong. I quickly made a search and couldn't see Ginger anywhere. Kim began searching the yard as I began searching the neighborhood, wondering if she had finally "flown the coop" for the first time. I was envisioning her encountering a neighbor's dog and the end result of that wouldn't be pretty. 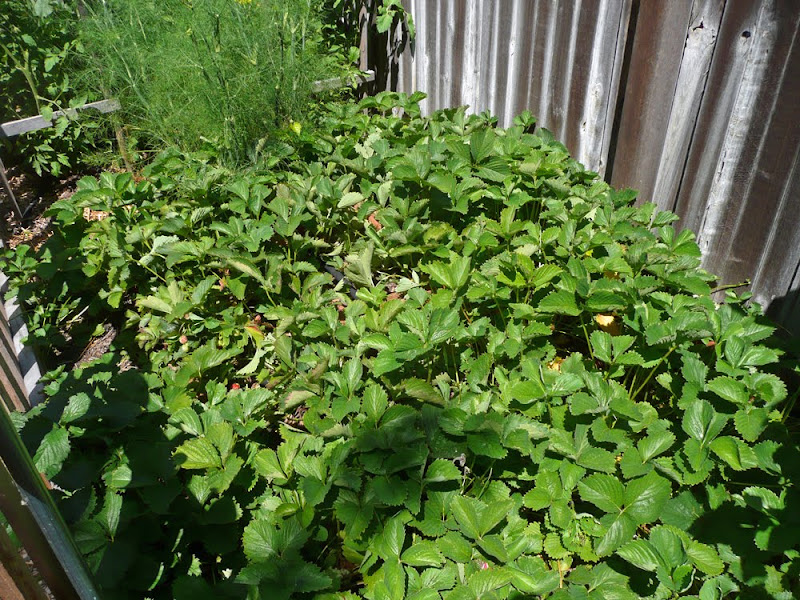 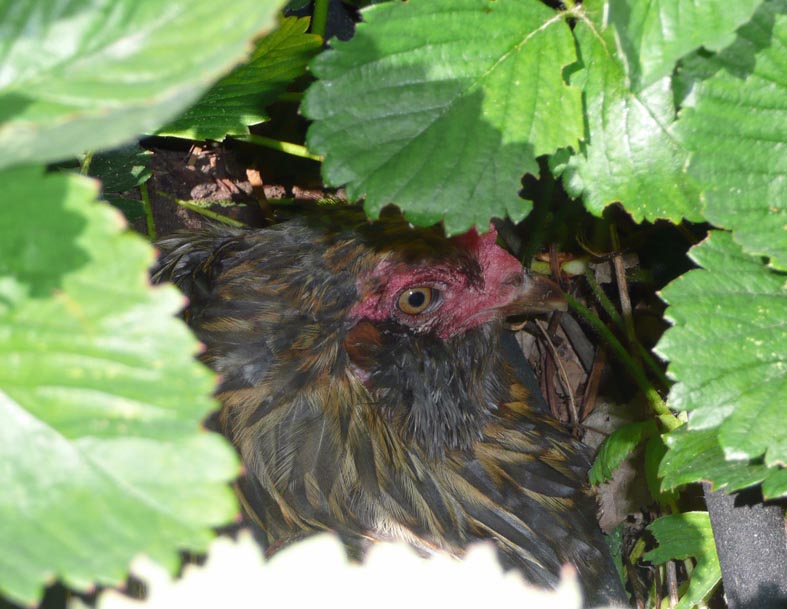 This was where we found her yesterday the second time she went missing. So we gave up and left her alone. We figured at least she was still in the yard.

When I came back later Ginger was back in the coop (we leave the door open all day so they have access to water and food and the nesting boxes) and she had left this in the strawberry patch. 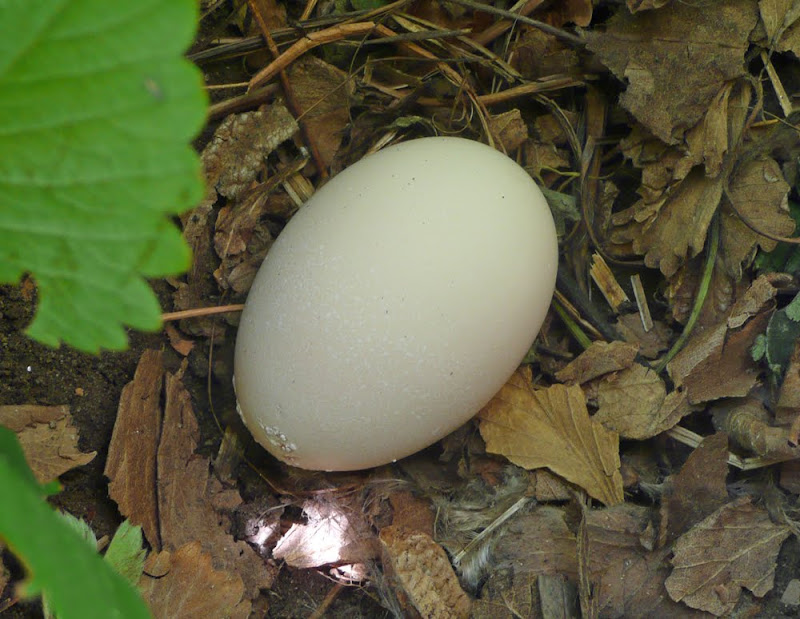 All the information we read concerning raising chickens said that with just three hens, two nesting boxes are plenty. Yesterday Jelly Bean was using the right hand box. Seems as if the left hand box just won't cut it for Ginger so she flew over our little four foot fence into the veg garden and made her own nest.

So we gave up and since we were both gardening outside yesterday we let them all have a day in the garden. 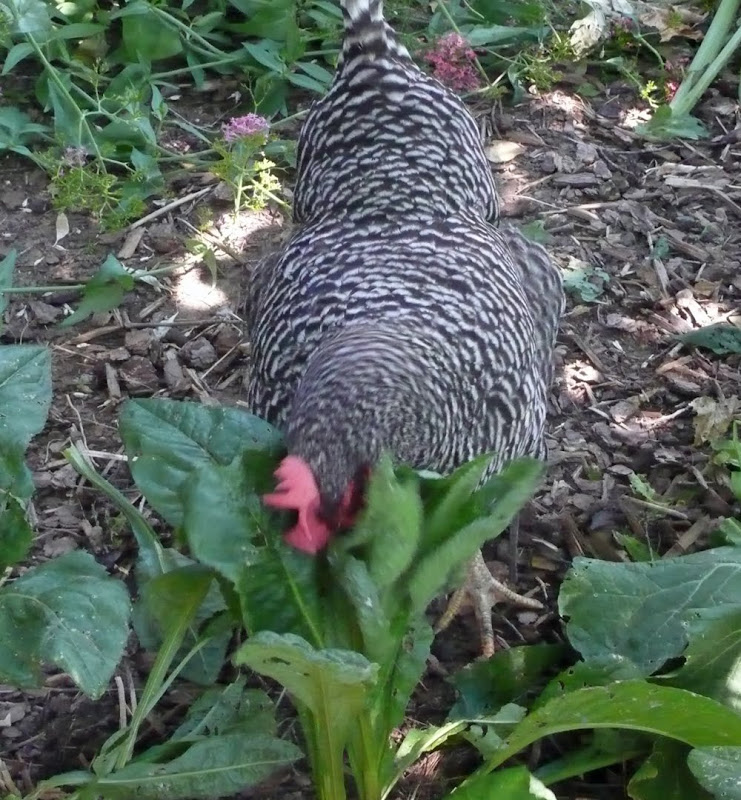 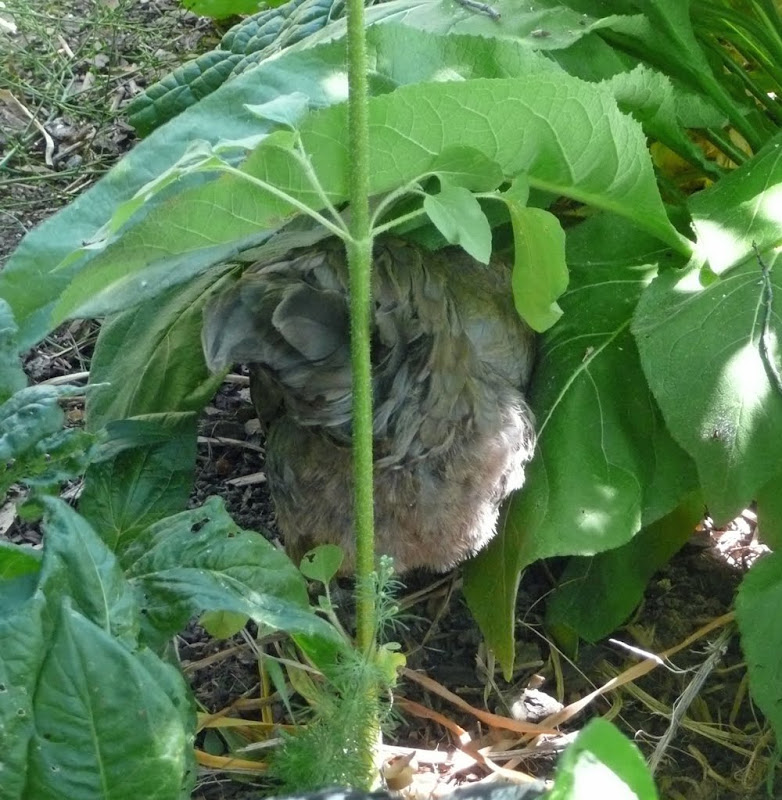 A nice view of Ginger's butt as she looks to see what's under the Crambe cordifolia. 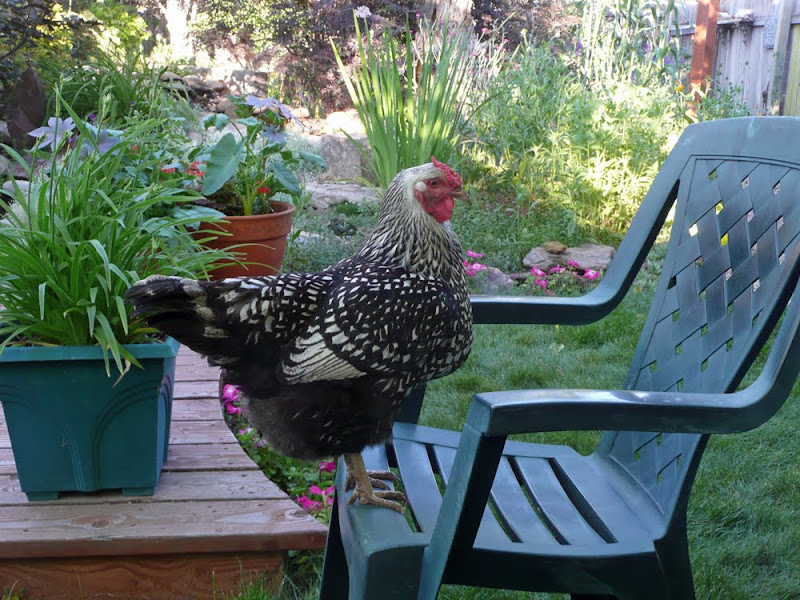 And Tootsie gets friendly with Kim. 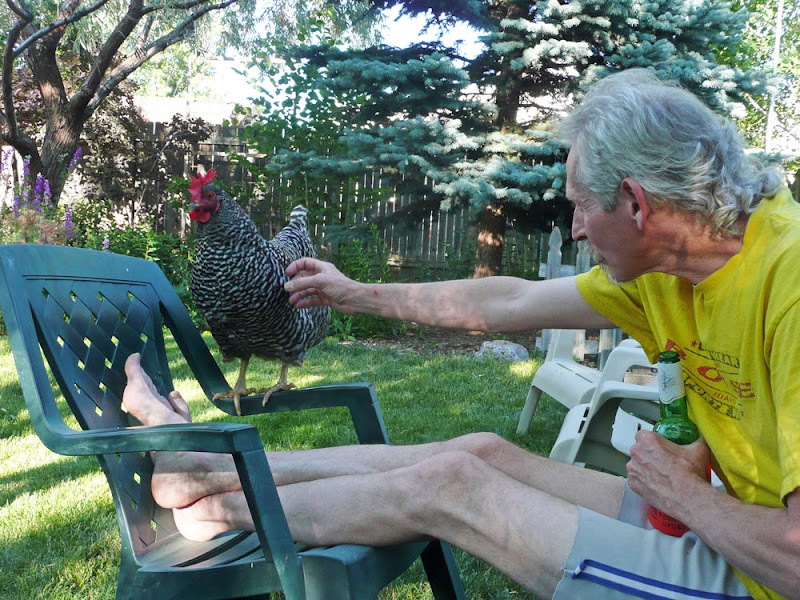 All three of them looking innocent. 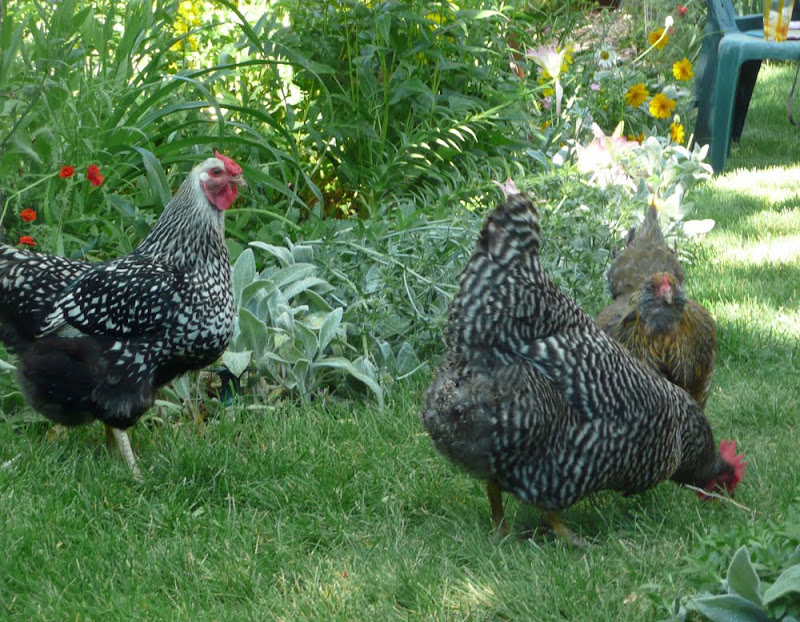 We plan on bringing them into the garden at least once a week from now on. As long as we're with them we can minimize the digging, scratching and constant munching of plants. I did realize yesterday how much I have missed seeing them in the garden. And they are such a natural pest repellent, we really need to let them do their job.
Posted by Victoria Williams at 7:36 AM

Labels: Chickens in the Garden

I'm surprised they stay in the yard. I'm guessing they know it's their home. They sure make enjoying the garden entertaining.

I keep wanting chickens, but Pete says that he is the only animal I'm allowed. :) As large as our garden is, we would never find the eggs they decide to deposit in places outside the coop... so for now I'll just enjoy yours. Stay cool... supposed to be 87 here today.

I am so jealous!!! You have these beautiful, funny, cute chickens, and I am about to have a second dog! I want a chicken! I want fresh eggs! You are lucky people!

Oh your story so made me smile...... then to see the girls munching on the plants . I agree they do like to range but for garden sake once or twice a week is enough..

They sure look healthy and happy.

Your girls are very pretty and what a lovely egg Ginger laid. I'm sure they love prancing around in your garden. Having them on bug patrol is definitely a win-win. Once a week sounds reasonable to me. Great post!

I had to laugh at Ginger in the strawberry patch...'you don't see me!'
I like that you keep them in the garden with you ---when you are also out. The sounds chickens make is so fun...real conversation!

I believe Ginger wants to start a family. She knows you take her eggs when she lays them. Guess you now need a rooster.

I have always wanted to have some chickens and hope maybe next summer we can build a coop. I know nothing about raising them, but can't wait to learn. Yours are so pretty. I love that they left you a surprise in amongst the strawberries.

I bet they were thrilled to get back in the garden Victoria! You could post about them every time you blog and I wouldn't get tired of seeing them. Glad Ginger hadn't escaped too far.