(Interrupting the Vegas posts for this holiday update.)

I had a great Christmas. It's always good when we can get our family together and have a nice relaxing dinner. As usual I tried out some new recipes this year.

We've enjoyed having crown roast for the past few years at Christmas dinner. This year I found a recipe for a stuffed one.

It turned out great. 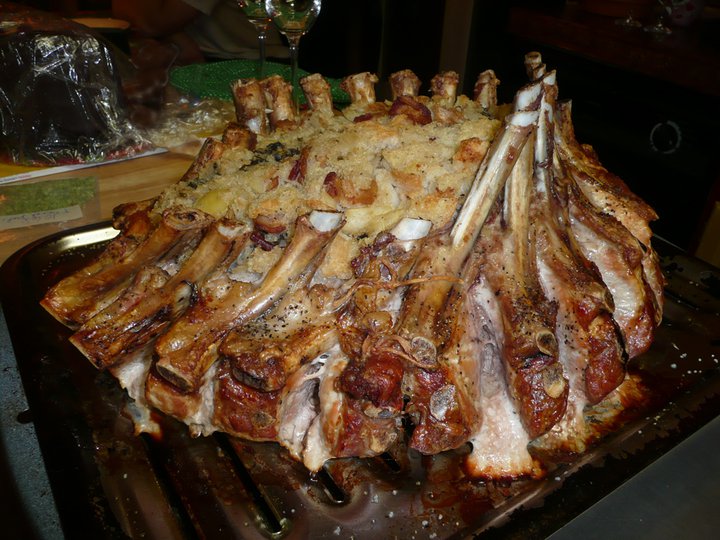 Here's the recipe I used. (click on it to enlarge) 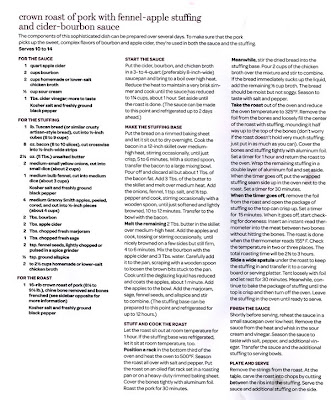 Also had these great carrots with it: Glazed Carrots and shallots with thyme. So good. 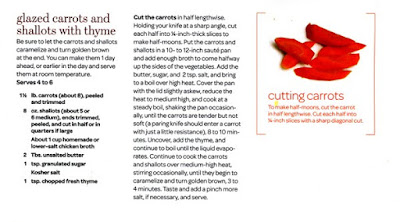 For dessert I made Martha S.'s Bûche de Noël. 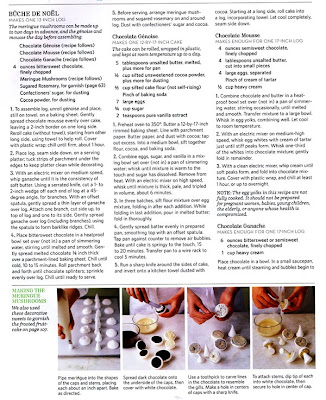 I suppose many people have made their own Bûche de Noël or Yule Log cakes. They are fun to do.

According to France Guide; "At one time, all the family would gather around the hearth for Christmas. The children sang songs and listened to stories told by their grandparents while an enormous log burned in the fireplace. It would be made of a strong, hard wood that would burn all night. Decorated with leaves and ribbons, it was lit by the youngest and the oldest family members after being blessed by the head of the family with oil, brandy or sometimes with a branch that had been dipped in holy water. The ashes were then saved because they would protect the home from lightening and the devil in the upcoming year.

This custom, starting in the 12th century, travelled throughout most of Europe and even to Quebec. In Italy, the log was called the “ceppo” and in England, it was known as the Yule log. However, the tradition had disappeared by the end of the 19th century because the large fireplaces were replaced by smaller, iron stoves. The big log was substituted by a small one that was decorated with candles and greenery and used as the centerpiece on the Christmas table.

Today, a cake shaped and decorated like the Christmas log is used. It is the color of wood, and covered with chocolate or crème de café. It is sprinkled with glazed sugar and surrounded by little woodcutters and meringue mushrooms."

My meringue mushrooms in the oven: 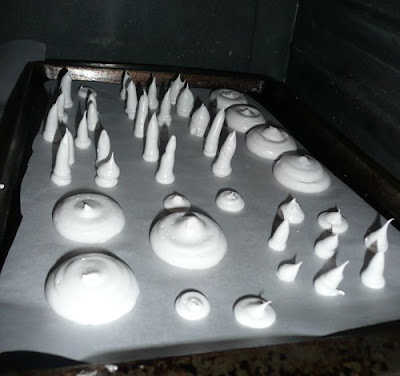 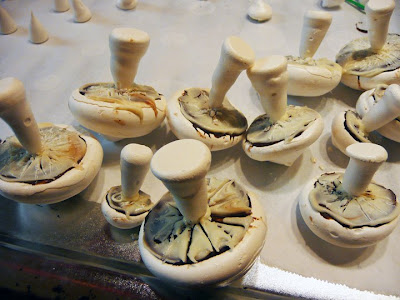 Adding the chocolate to make gills under the mushroom caps: 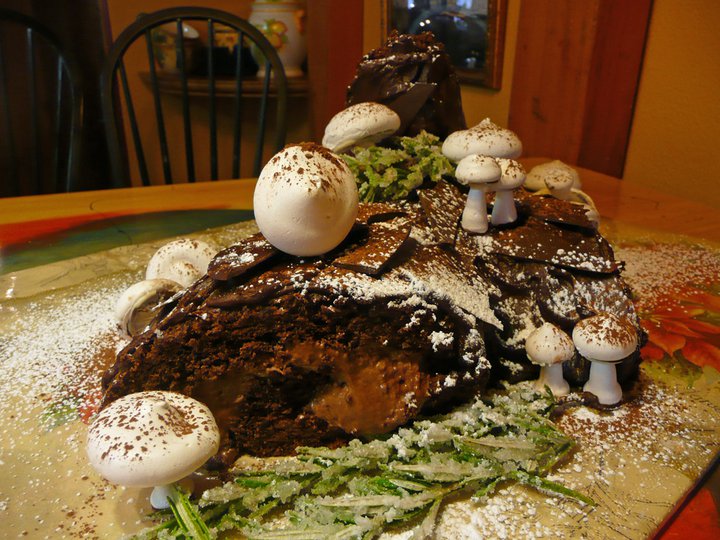 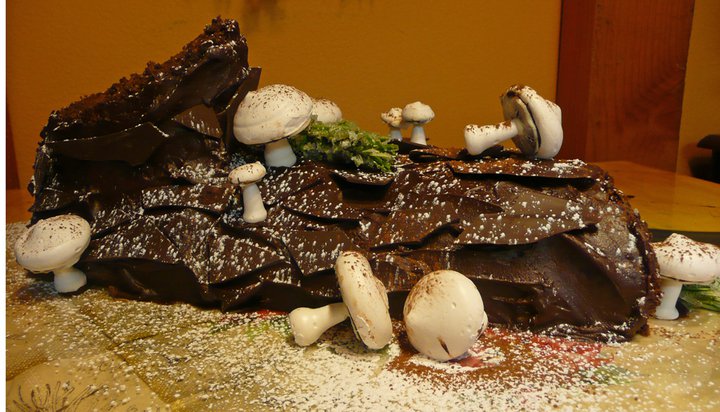 Here's Martha's cake from the magazine: 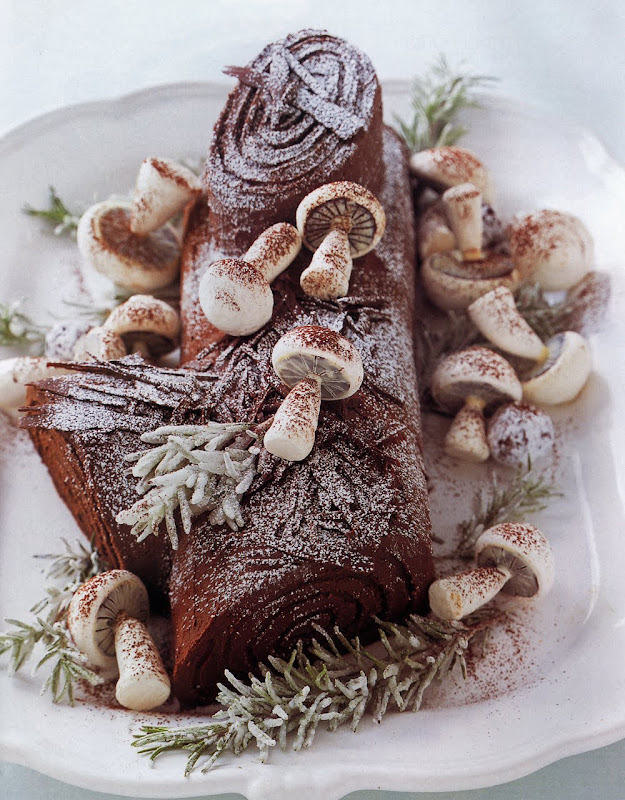 It's a fun project if you have the time.


The best part was spending time with my family: 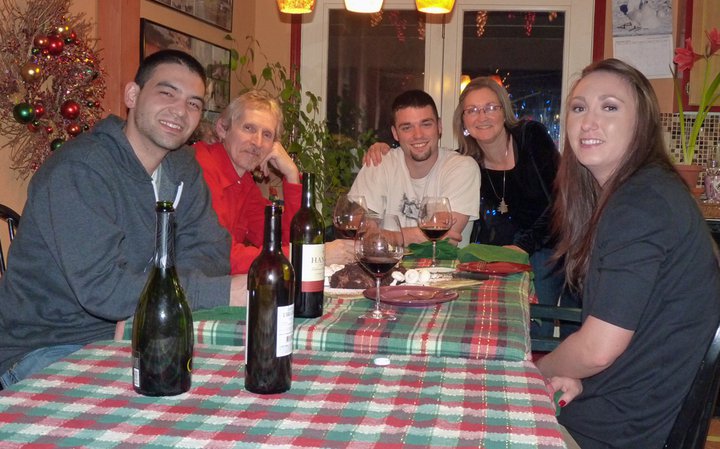 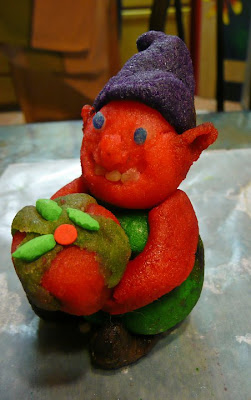 And just so you don't leave with the wrong impression, here's a pic of an elf I tried to make out of marzipan.

Don't let him give you nightmares!

Hope everyone had great holidays!
Posted by Victoria Williams at 10:20 AM

Happy New Year to you all! That Crown Pork Roast looks yummy! I must admit I forgot about the roast once I saw the cake! Yours is far better looking than Martha's.

Guys the meringue and marzipan oh you got me on those. The log is so real looking well done! You should open a B & B.

Wow, that cake is fabulous! You spent a long time making it, no doubt...it looks as good if not better than the magazine pic! Happy New Year:-)

Glad you had a wonderful holiday. I think your cake is better than MS Love the mushrooms...and the elf.

Hopped on over to your site from Rosemary's site. Your yule log turned out great. I made one for the first time this year. I didn't want to make the mushrooms from meringue or marzipan, so I used the peanut butter filling from the buckeye balls recipe that everyone makes at Christmas. I also made mice. Dipped everything in white chocolate. I posted a picture on my blog. Thanks for the history of the yule log!

Wow, great job on that cake. That looks terrific.

Hi Victoria! Glad you had a good holiday. Happy New Year too. I always admire your cooking skills and that you make special occasions really special by trying so many new recipes. Your family is so lucky. These two dishes look mouth-watering thru the computer so I can only imagine how tasty they were in real life. I've made a Yule log before but it did not turn out anywhere near as nice as yours and I did not attempt any mushrooms to accompany it. That adds so much! I would "almost" hate to eat it, it looks so pretty.

Victoria and Kim, that cake is decadent and the mushrooms... spectacular, but that pork roast, now that's what I'm talking about! What a lovely feast, and yes, it's all about family.

We wish you a healthy and happy New Year and one filled with many blessings.

what an awesome cake! i agree that yours looks better than martha's. and the mushrooms are incredible.

Wow it turned out beautifully! I was going to say it looked better than Martha's too and I see other people already said that.