My favorite sightseeing on Kauai was the Na Pali coast. This is an eleven mile stretch of the coast that is accessible only by hiking or boating.

Lucky for us we arrived at the trail head early (8AM) in the day and avoided some of the other tourists. 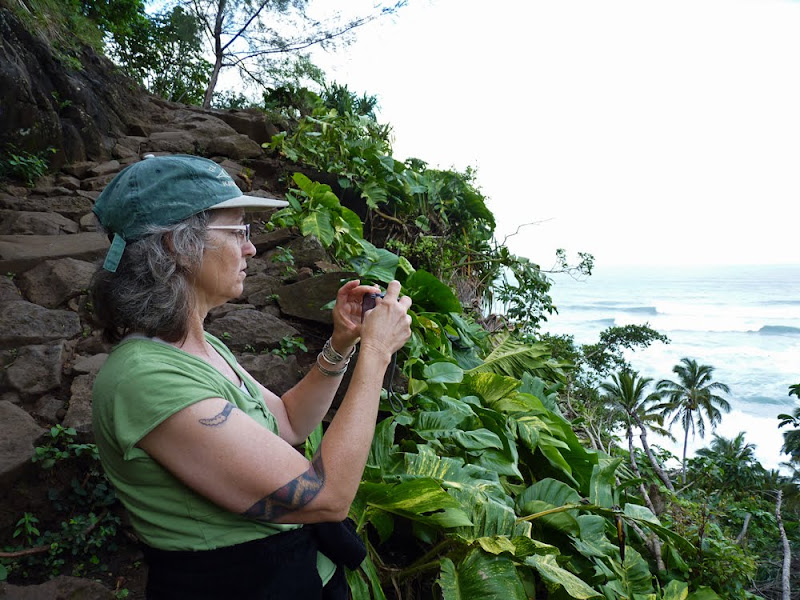 The trail was a slippery, muddy mess. We were glad we had paid attention when our guide book suggested bringing a spare pair of worn shoes just for such an occasion, as Kauai's red dirt stains everything it touches.
We watched some people attempting to step from rock to rock in order to keep their nice clean shoes out of the mud. I'm sure they eventually gave up. 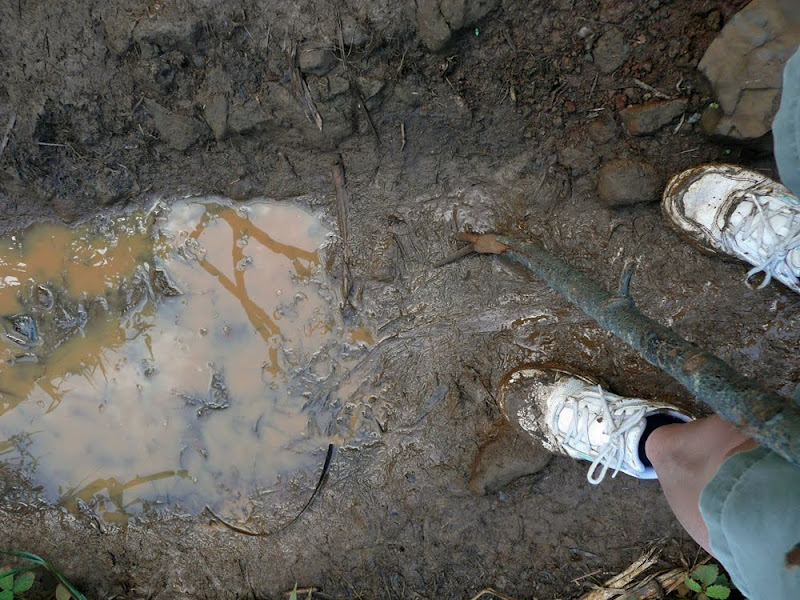 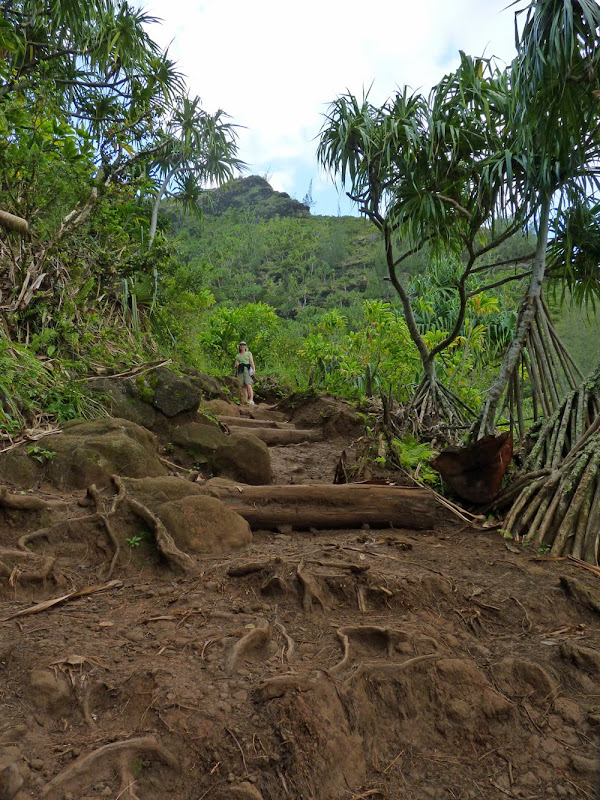 From these photos you can see why this is such a popular hike.
Around every corner is another gorgeous view. 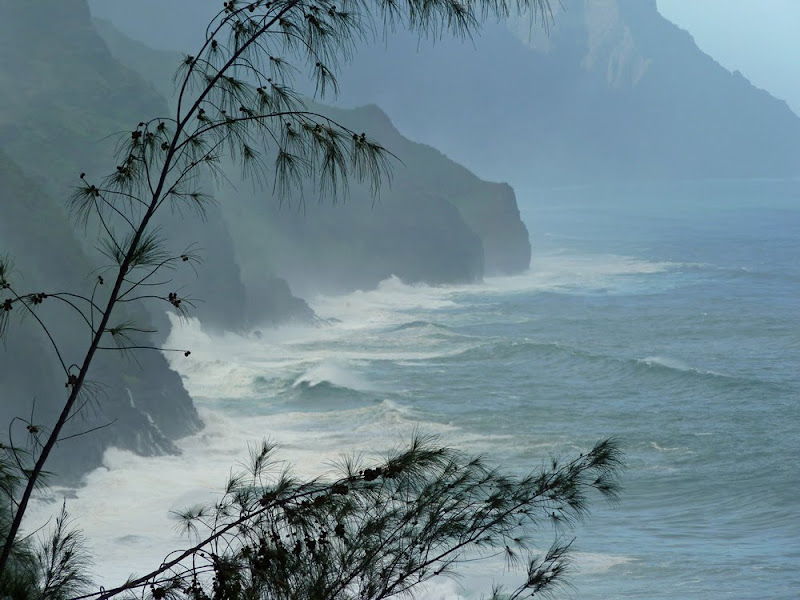 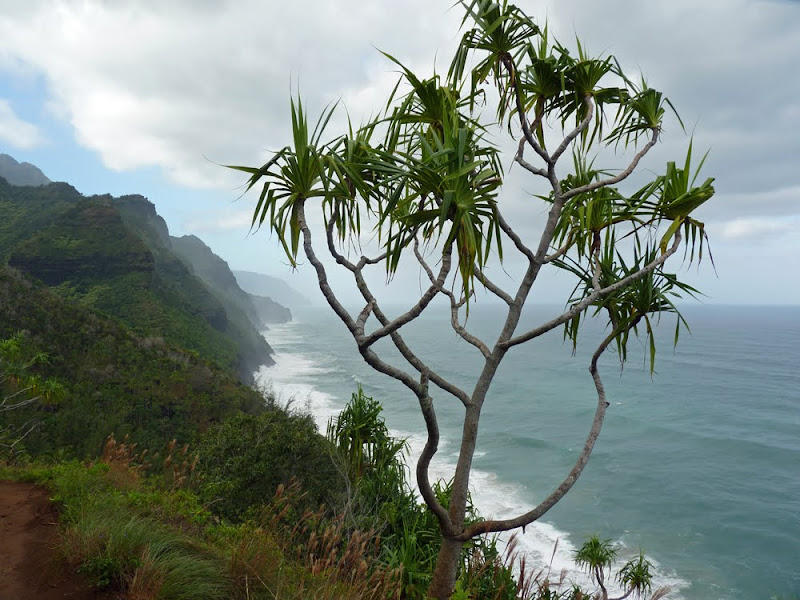 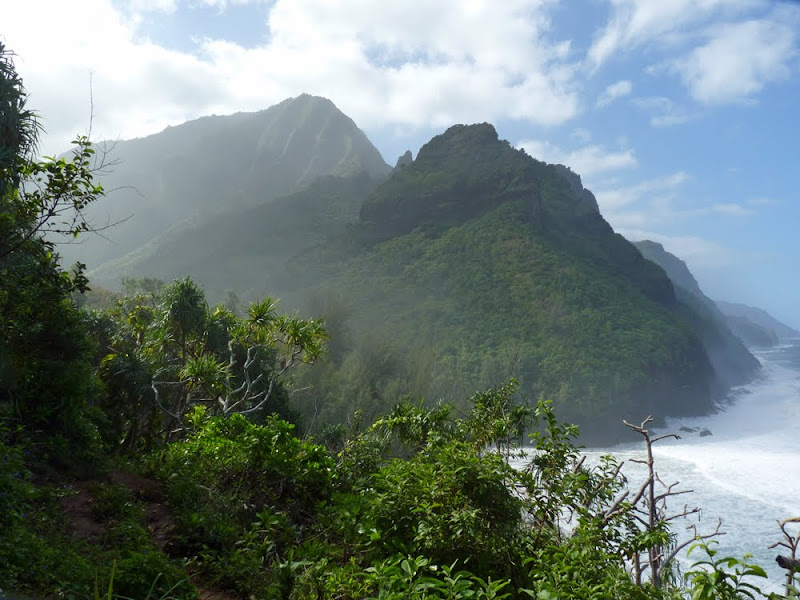 This is the first small stream we crossed on the way to Hanakapi'ai Beach. The main stream was running much, much higher when we reached it. 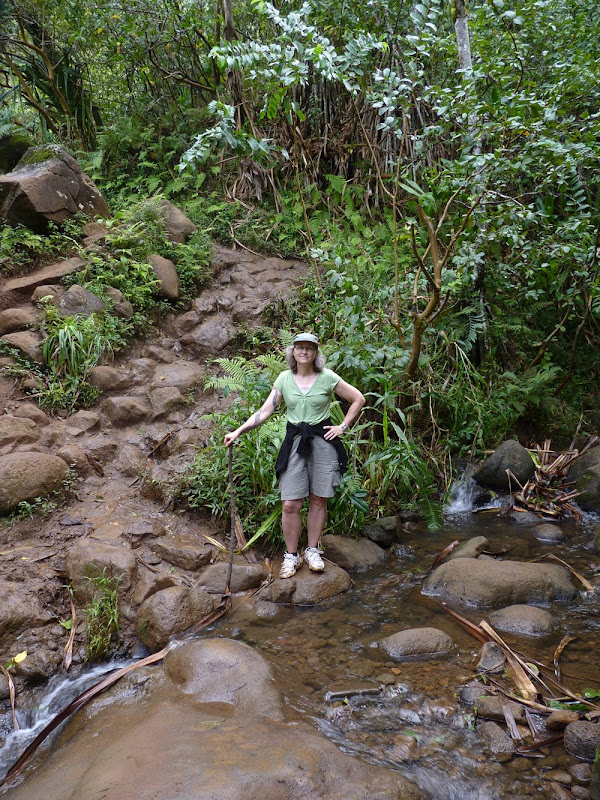 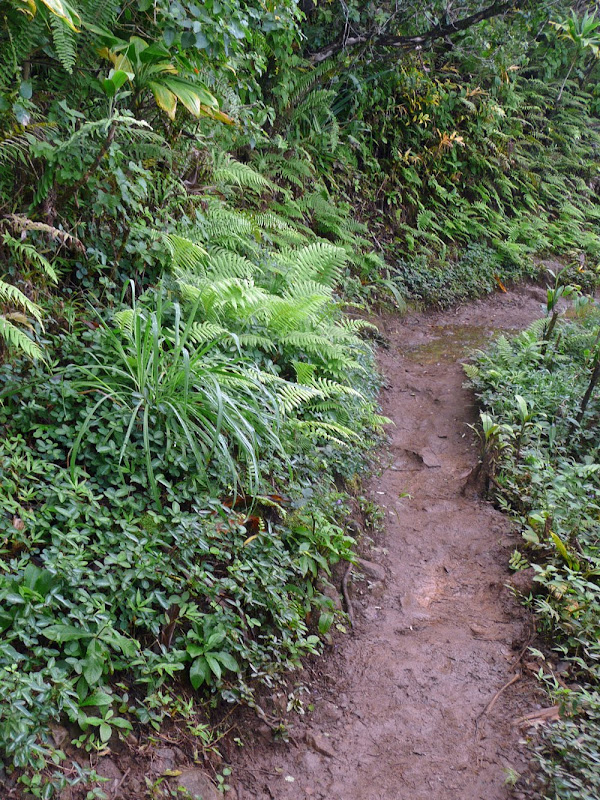 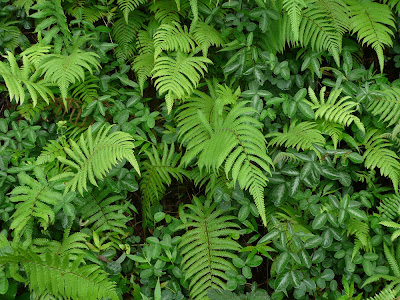 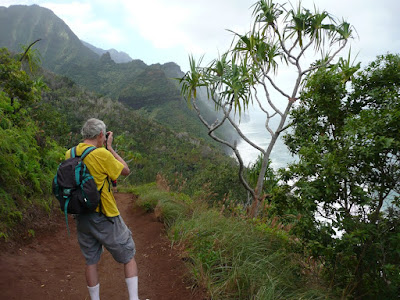 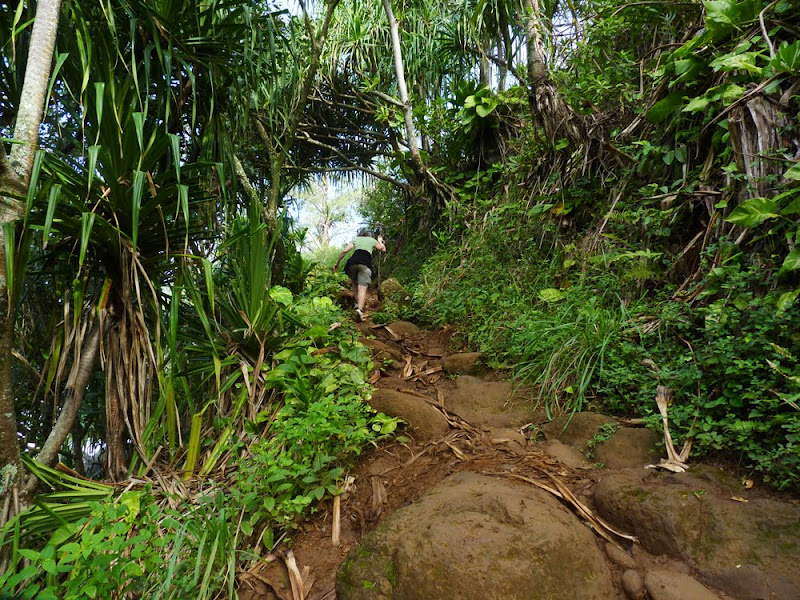 Our original plan was to hike the two miles to Hanakapi'ai Beach then turn inland and hike two miles to Hanakapi'ai Falls. Our plan was foiled from the first, because as we set off the park ranger informed us; "there will be no fording of the stream please, as it is running too high." When we reached the stream we understood. Crossing it usually involves water that comes up to one's knees. We watched as one couple forded it with water up to their thighs. The hike to the falls involves crossing this stream many times over.

According to our guidebook; "If the stream looks high and is running swiftly, turn back; the trail up ahead is narrow and dangerous during periods of high water."

*Sigh*. The falls would have been soooo worth the hike.

But we took their advice and turned back once we reached the beach.

You can see from these photos just how furious the ocean was that day. In fact, while we were on Kauai they received some of their largest waves in years. 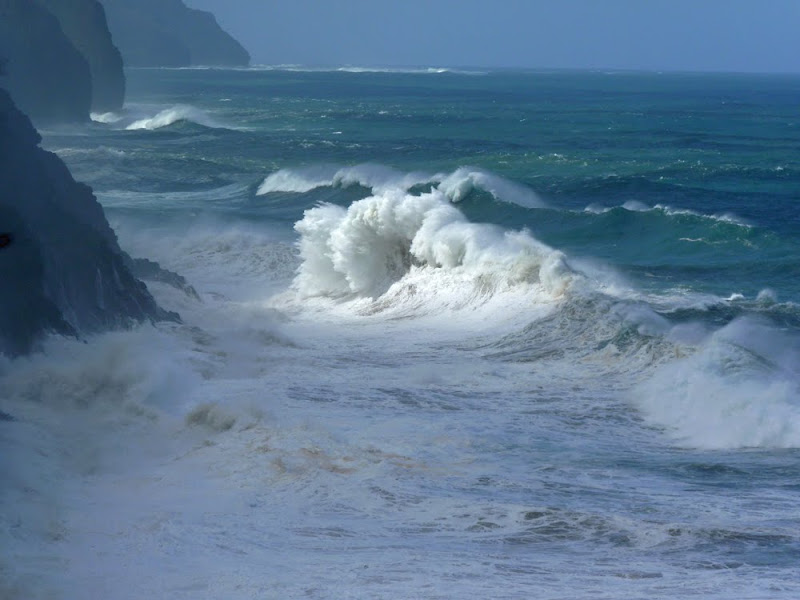 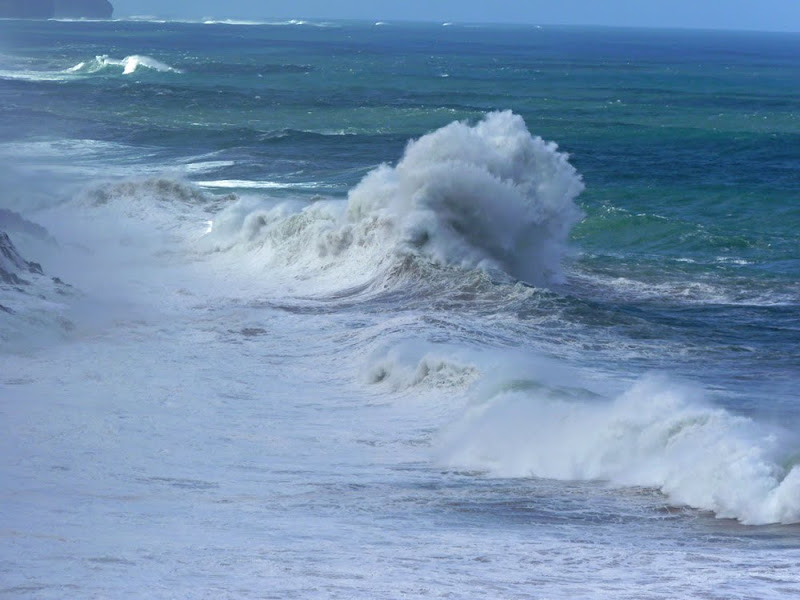 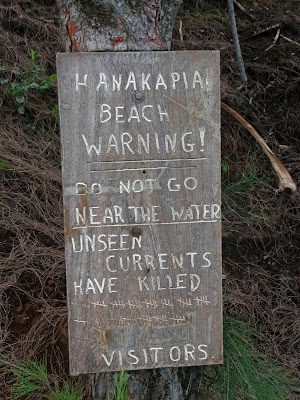 Those pictures were taken right at Hanakapi'ai Beach where this somber sign is posted.


With those magnificent views the Na Pali coast was a winner. Even with the muddy, slippery and rather dangerous trail I would definitely revisit this area and optimistically complete the hike to the falls. 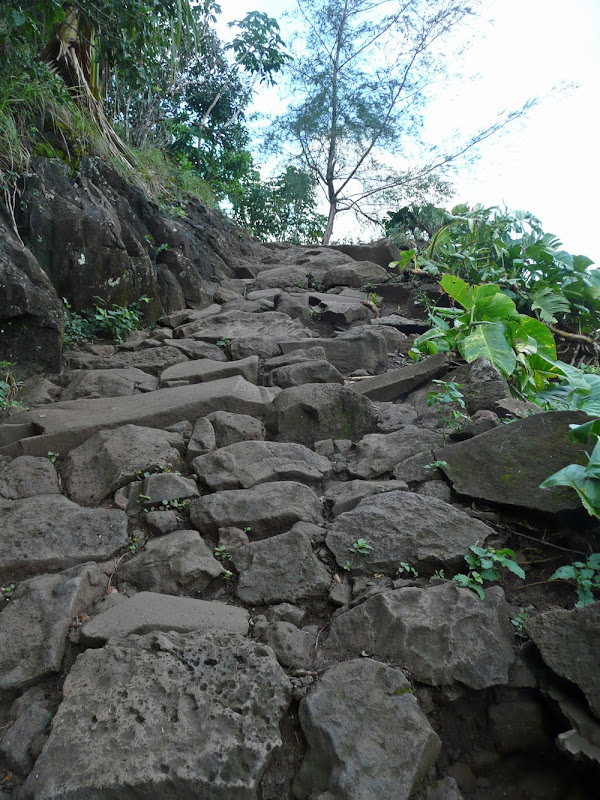 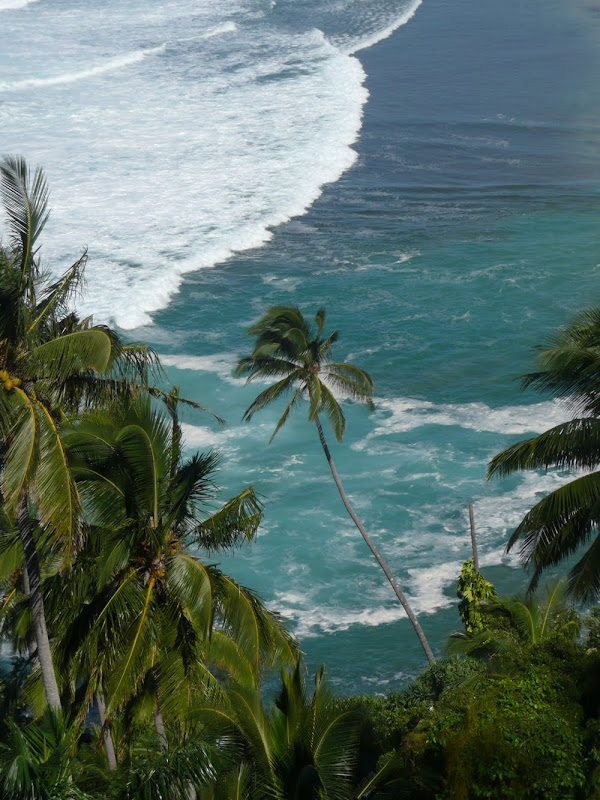 Posted by Victoria Williams at 4:53 AM

I love the waves... roaring and soaring!!... But most plants are somewhat similar to our place.... ~bangchik

The Hawaiian islands are heaven on earth. Beautiful hike!

Thanks for taking me away to somewhere warm sunny and gorgeous.

Come enter the contest on my blog!