Yesterday was my daughter Vanessa's birthday. She and her boyfriend Chris came over to eat dinner with us. The meal was delicious even if I say so myself. We started off with caprese salad made with fresh basil from our garden. 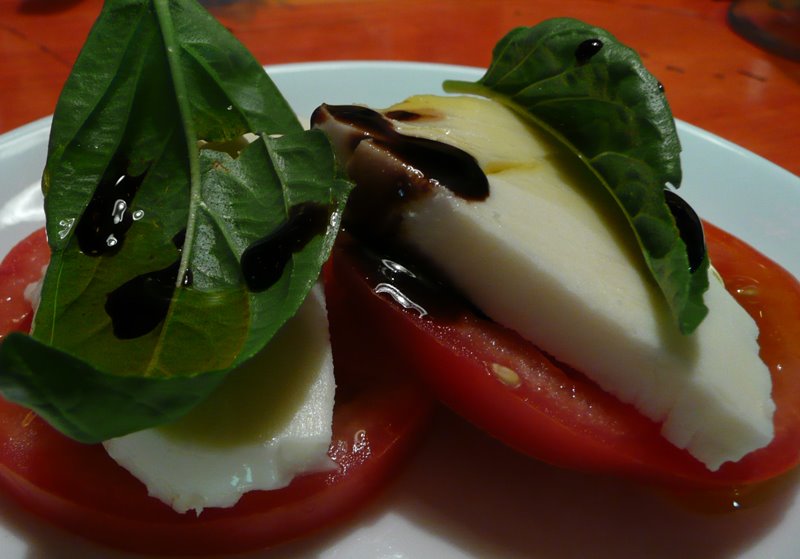 Then we took Katie's advice and made Grilled Tri-Tip With Cuban Mojo Sauce. 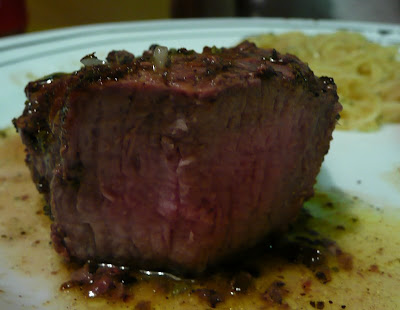 Everyone agreed it tasted just as good as dining in a restaurant. (I had to take them at their word as I don't eat red meat.) We served it with a simple pasta on the side. For dessert I brought home a variety of sweet bars from the co-op. Vanessa declared them worth every penny and at $2.50 each that says a lot.

To top off the evening we had some unexpected visitors. They were too late for dinner as we'd all had our fill. But they invited themselves anyway. 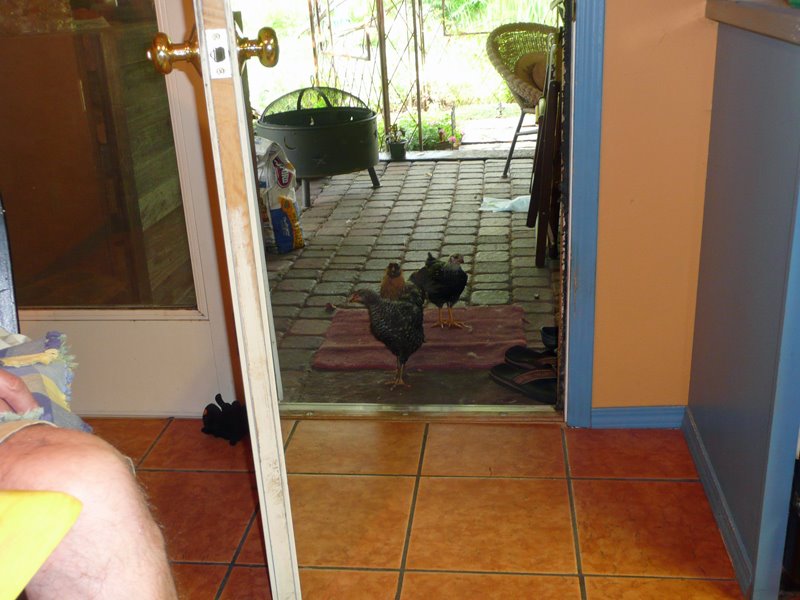 Here they come; Tootsie leading the way as usual followed by Ginger and Jelly Bean.

Kim and I were as surprised as anyone by these party crashers. During their occasional free ranging in the backyard the chickens usually ignore us. Once in a while they will jump on my legs as I'm lounging around reading. But for the most part they enjoy doing their own things; scratching around, eating grass, taking little tidbits off of the occasional plant, etc. 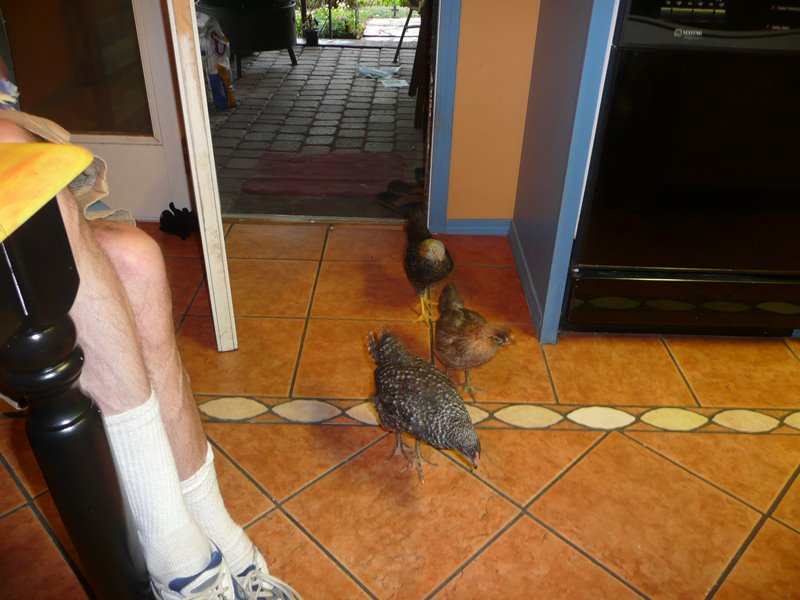 I don't know what it is with these chickens; just curious? Is it possible they're lonely? Were they upset at not being invited to dinner? 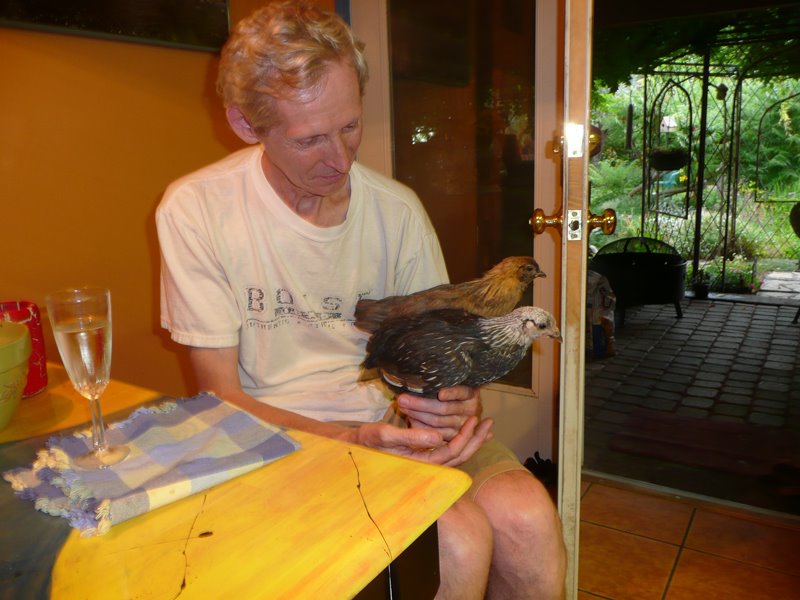 Whatever it was, Vanessa was happy. She'd been wanting to pet them while they were free-ranging earlier in the back yard. Ginger eventually fell asleep in her arms. 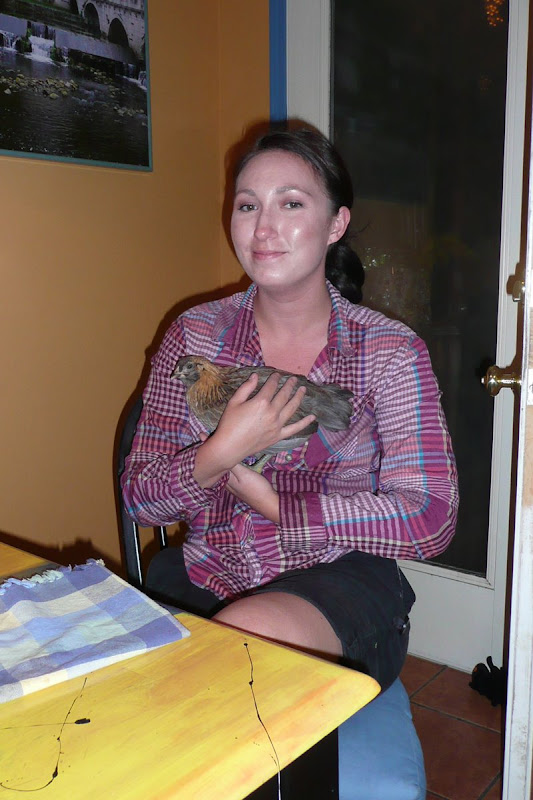 Chris commented on how soft they were.

Tootsie seemed to fall for him. 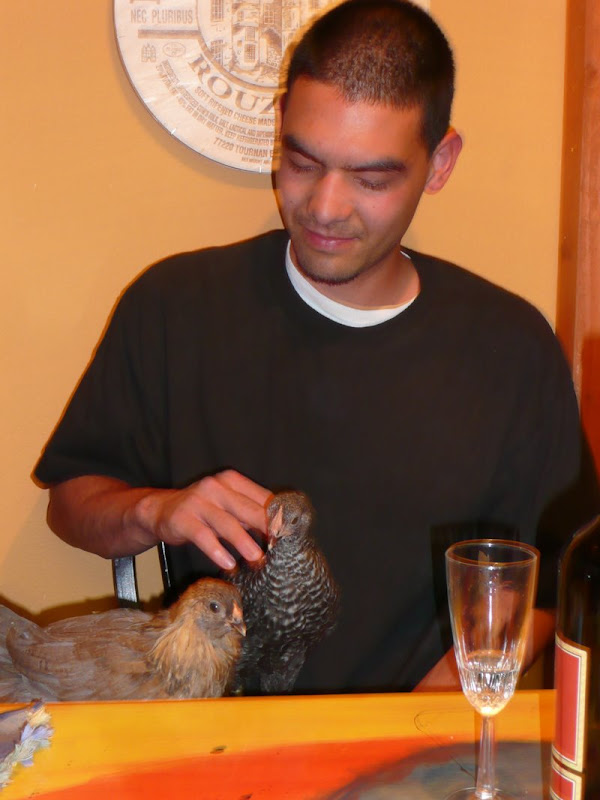 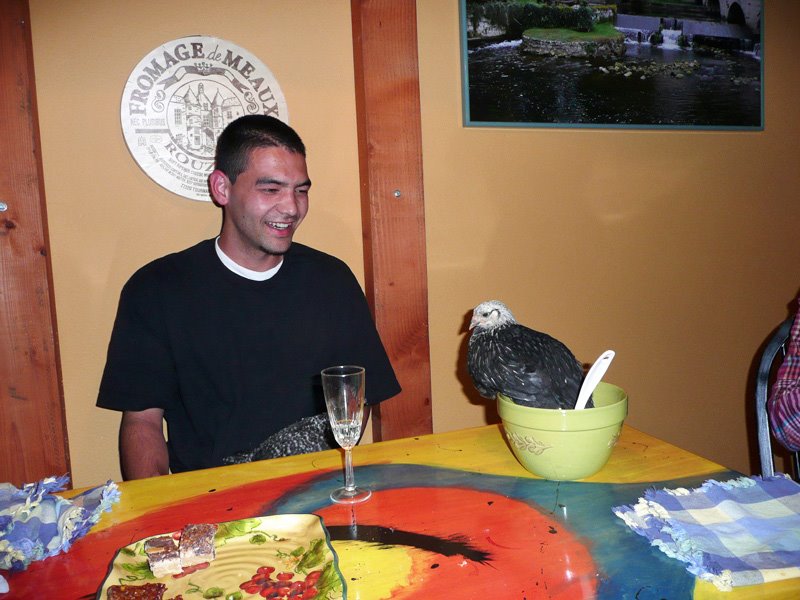 They certainly added to the evenings entertainment.

We eventually put them to bed in their finished coop. (I'll post pics of it later.)

Goofy chickens.
Posted by Victoria Williams at 8:35 AM

That food looks delicious, now I want steak for dinner and haven't even had breakfast yet!
I love the chicken on the bowl.

boy they made themselves right at home! Pretty funny.

How cute! They grow up so fast.... My hen, Fern, loves to stand outside the glass slider and just stare and stare inside. Should would run in as soon as she got the chance I just know it!

House chickens! I would be thrilled. Usually chickens don't let people get close enough to touch them, but these come in for dinner? Those are good chickens.

I am so glad you made that recipe. It is by far and away the best thing we've ever made out of Sunset.

And the chicken visitors were cute! I love how there was chicken on your table and in your bowl, but wasn't part of dinner.

I am still laughing about the chicken on the bowl! Great picture~ I love to just watch ours too. Their antics are hilarious!

Oh, man, I want chickens! They are too cute!

Tri-tip is such a great piece of meat! I have a favorite grilling recipe (thank you Bobby Flay) that is my go to for that, but this one looks so good, I will have to try it!

The caprese salad is just lovely! May I ask for the recipe? The meat looks so good!
Funny chickens! They want t be the babies. Your daughter is so pretty. Oh I wish I had her glowing skin!

Loved it! Happy birthday to Vanessa. Those chicks are way too cute!

These are great photos and so funny your chickens decided to come into the house that night!

OK how cute are those chickens!? I just love how your chickens travel in a little gang and wander thru open doors.

We don't let our chickens in for various reasons, one of which is that they are full sized, large Buff Orpingtons, and they are messy. But, are you aware of the chicken diaper? I found this on My Pet Chicken, and thought it an interesting idea: http://www.mypetchicken.com/Chicken_Supplies-Chicken_Diapers_NEW_-P494.aspx

The food looks absolutely wonderful! Your chickens sure seem to be bonding to you. That's a good thing, because...happy chickens lay happy eggs. :-)

That sounded like a fine dinner! MM
And the chickens, too cute!