Catherine at Gardener in Progress wanted to see more photos of our pond. Since we've been having some overcast days (and a bit of rain) Kim took the opportunity to take some photos.

When we first moved into our house we built a very small pond. Not a good plan. We enlarged it about 10 years ago. The pond now measures approximately 12 feet long x 5 feet wide. It is located in the center of the back gardens, right off the back porch.

We dug it by hand and collected the rock ourselves (whatever wasn't too large for the two of us to carry.) 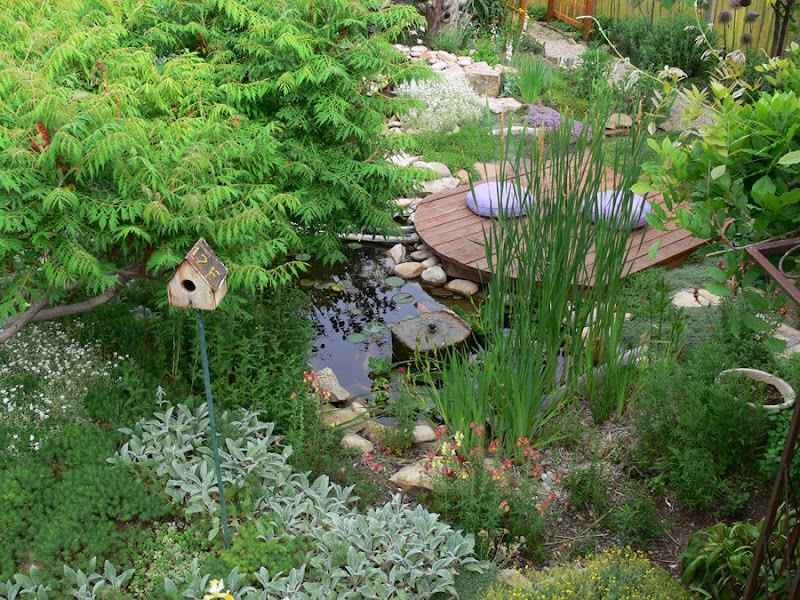 Kim made the fountain below out of cement using a trash can as a form. We had decided we wanted more water movement in this end of the pond. It was quite the show seeing the two of us move that huge block of cement into the pond. What's nice is, it's become a favorite spot for birds to stop and get a drink. 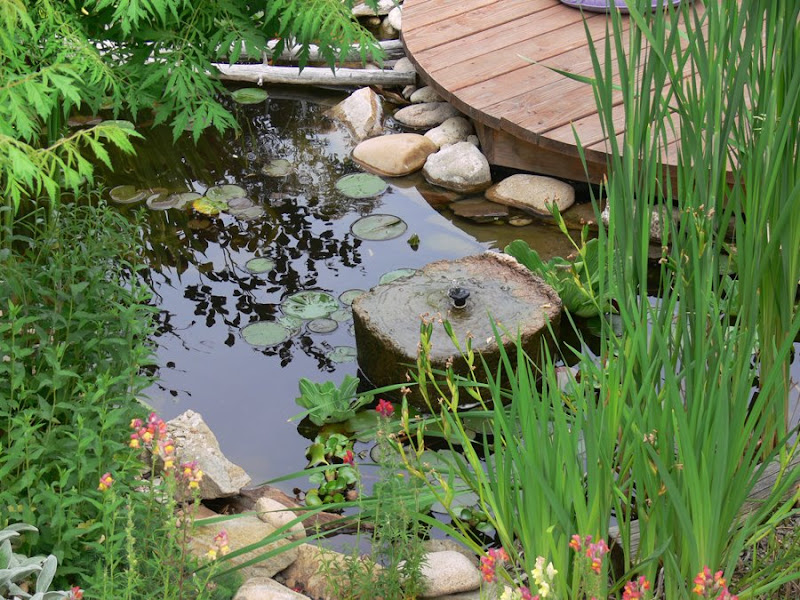 Kim built the wooden deck three years ago. I like it since it breaks up the "rock necklace" around the pond.

We've always struggled with plantings - too much, hiding the pond? - too little - doesn't look natural? We're fairly happy with what we have now. 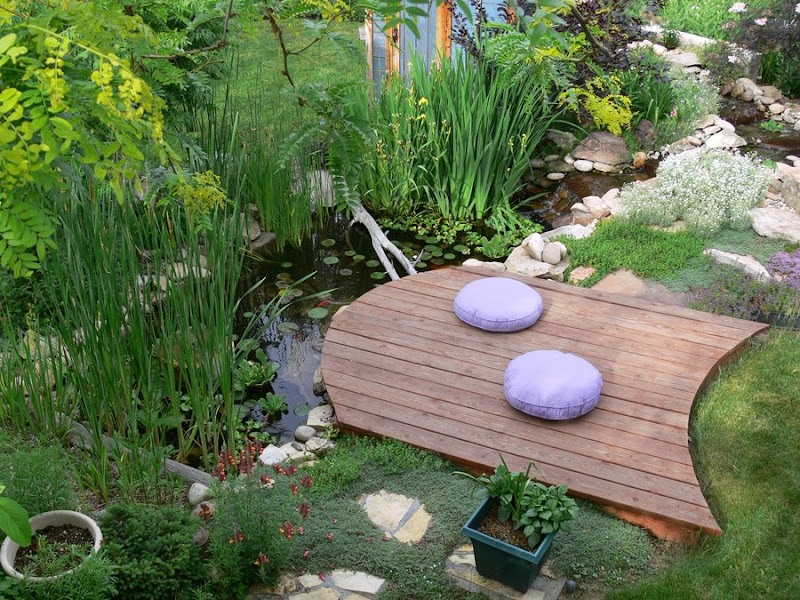 To the right in the photo below you can see the Black Lace Elderberry or sambucus nigra 'Eva' near the snag. That has been one great shrub. Grows like a weed. Great dark color. Nice pink flowers in early summer. (now) 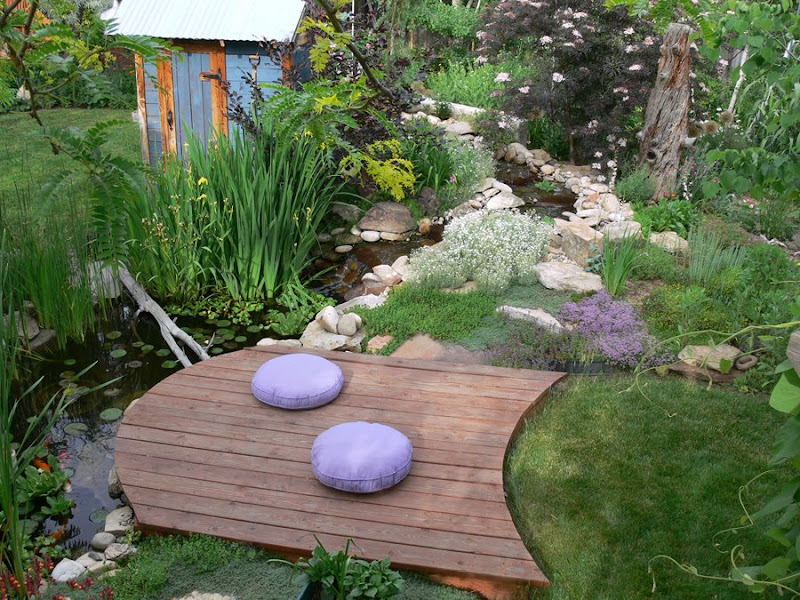 We've redone the waterfall a few times, trying to tweak it just right. Three years ago we did away with it and put in the short stream. I think we're finally satisfied. It adds some interest and seems to enlarge the pond on its own.

Kim takes a lot of pride in having done all the work in our garden ourselves. Occasionally we've needed some help from our son Casey (a little extra muscle), but for the most part we've built and planned and planted every little detail. 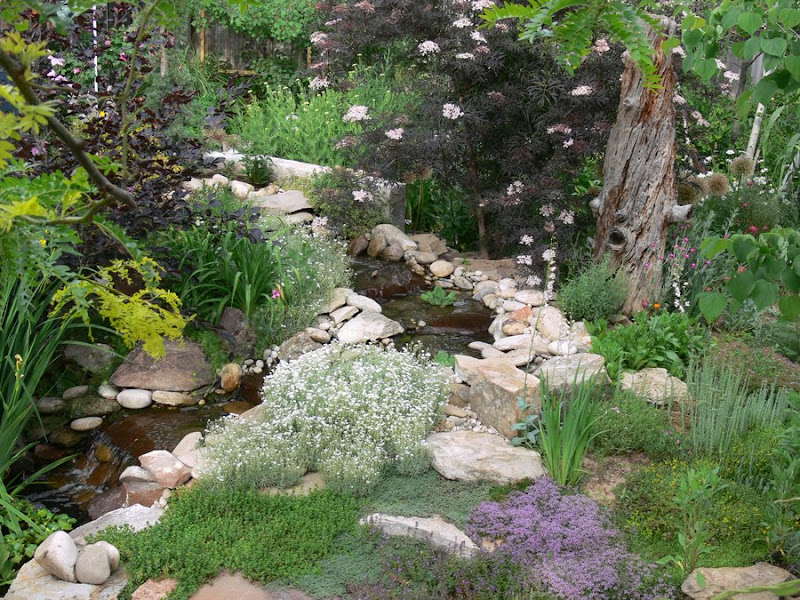 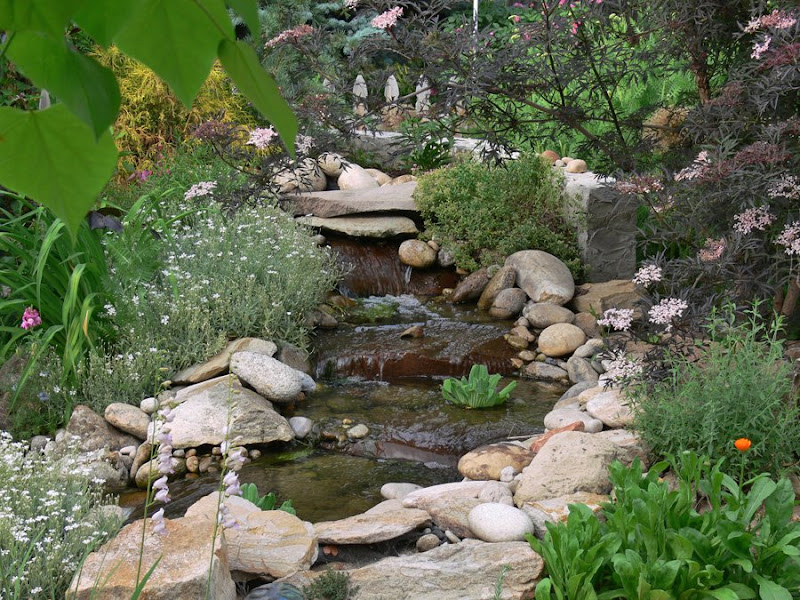 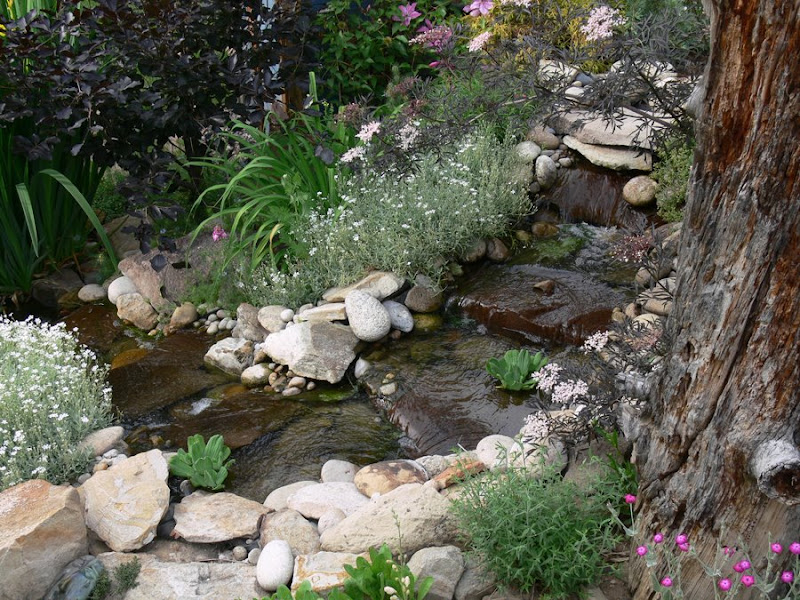 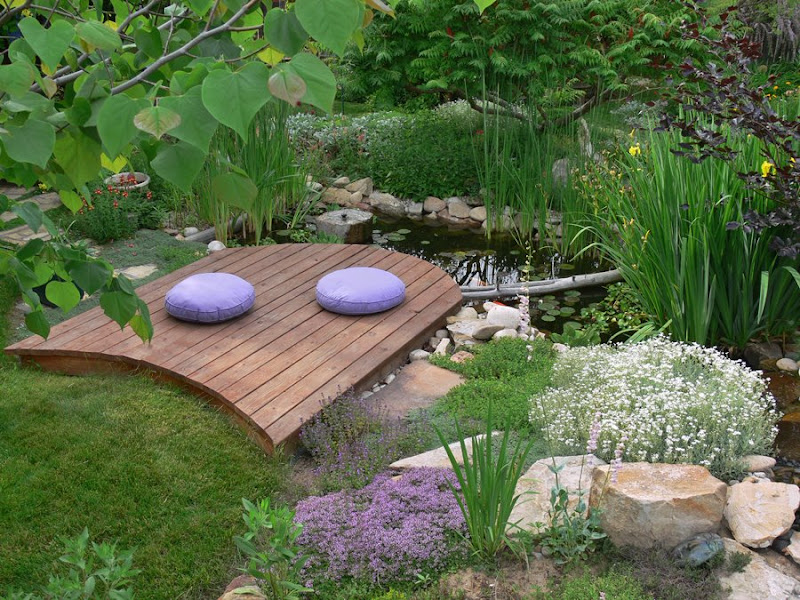 Chelsea likes to sun herself on the deck. 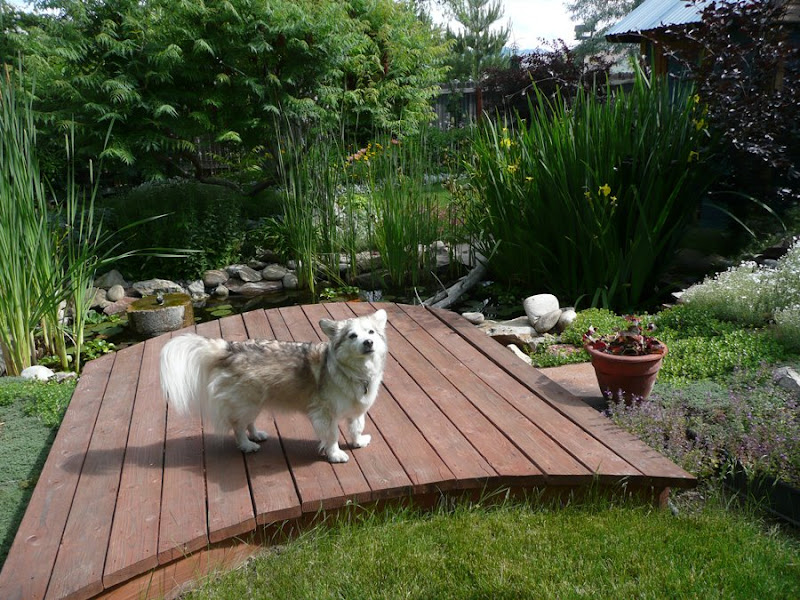 The pond is home to both koi and goldfish; about seven koi and a dozen or so goldfish. We have a filter system in the little shed behind the pond which keeps the water fairly clean. 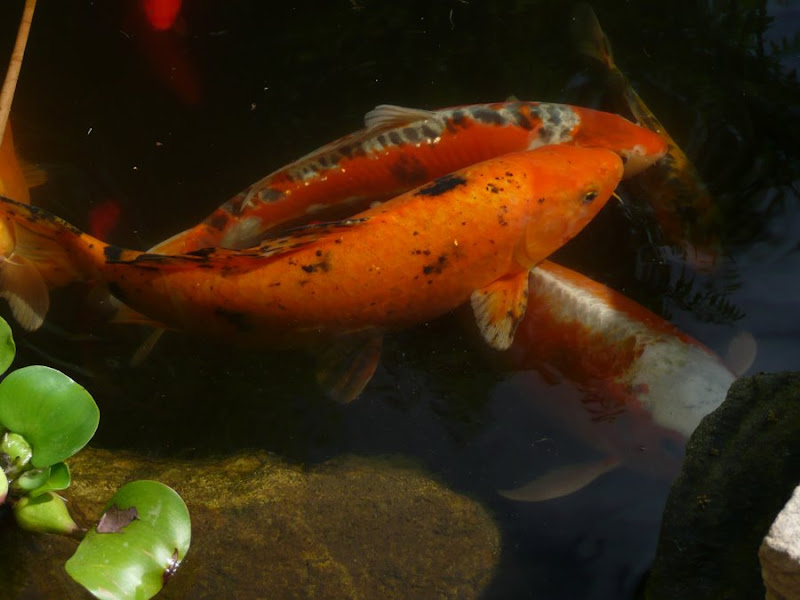 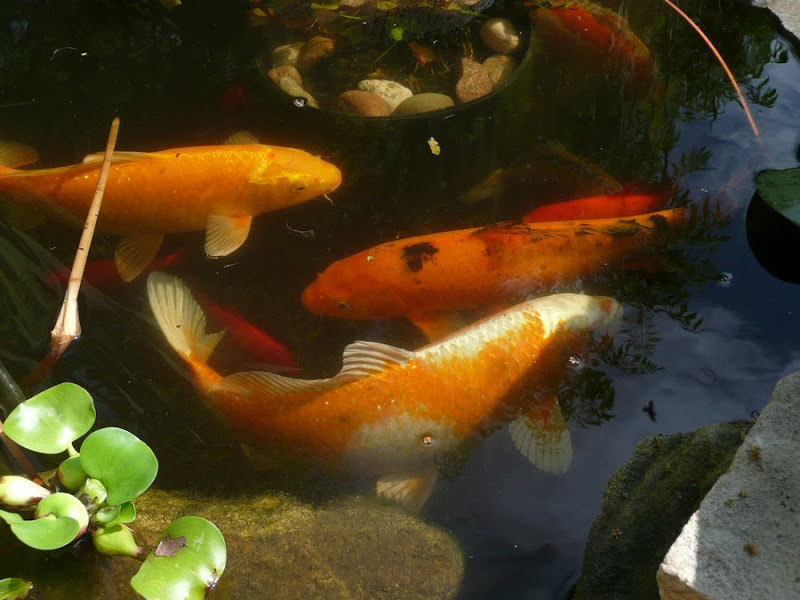 As far as water plants go we've tried many of them. Now we mostly stay with just the water lilies which overwinter in the pond (along with the fish). The lilies are reliable and the blooms are beautiful. They also multiply and need dividing every few years. You can see we also have some water iris and cattails. So far we haven't been troubled by them but the roots can be invasive so it's something to watch.
We usually buy either water hyacinths or water lettuce each year to help with cleaning the water also.

What would we have done differently? Probably make it just a bit bigger. As it is now the pond does seem to be on a good scale with the rest of the garden. But a bit more water surface would have been nice. We considered expanding it when we put in the stream but it was just too costly.

We do feed our fish during the summer months and that adds a little expense. But they don't need to be fed every day. We've been told the food does help them build up some fat so they overwinter better. During the winter it is necessary to keep some space on the surface of the pond from freezing over. The gas that the fish and plants produce must have a place to escape, otherwise the fish will die. The pond also needs to be a minimum of three foot in depth for our zone in order not to freeze solid. (The fish don't do much during the winter but they won't survive if they're put in a freezer.)

These last two pictures are for Kathleen at Kaseys Korner. She recently purchased a penstemon palmeri. We've had ours for years. They sprinkle themselves around the garden and we're always happy to see them. I don't know why I don't plant them out front, (I will now), as they can be annoyed by overwatering. 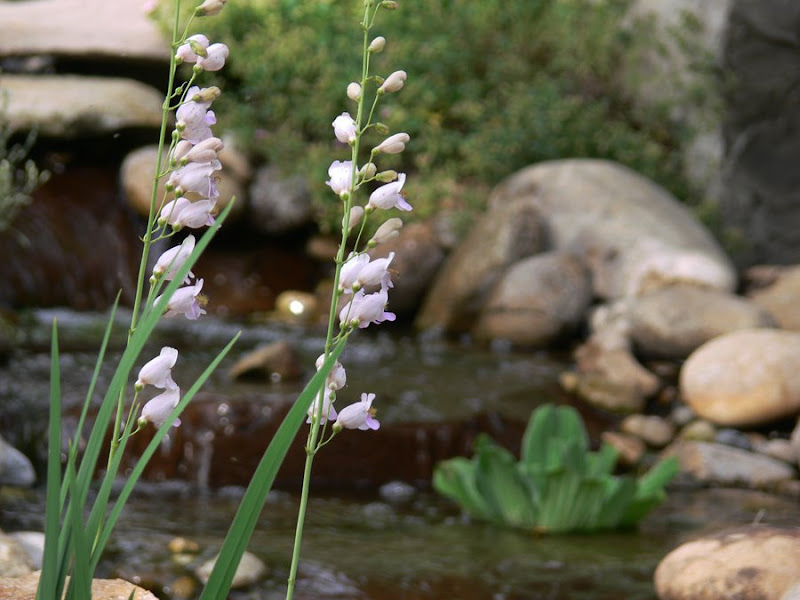 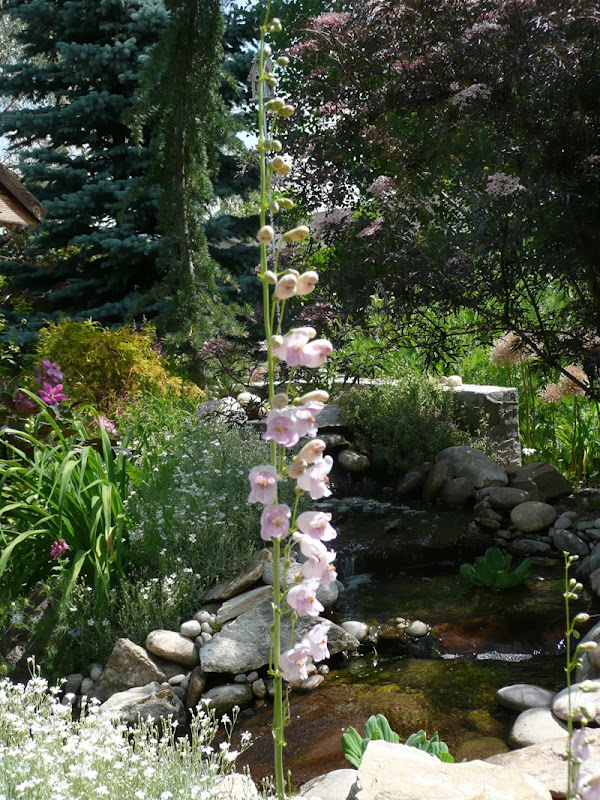 We've agreed to have our pond among those featured on the Ada County Pond Tour this summer. We participated six years ago and it was a lot of fun.

Do you have a pond? Is it a "water garden" or a "koi pond" or a mix of both like ours?
Posted by Victoria Williams at 1:23 PM

My gosh, y'all, your water feature is amazing! It should be in a magazine!!!

I guess the fish and fountain keep mosquitos at bay?

Hi Victoria and Kim, what a wonderful place you have created in your garden. The writeup is good info, you answered the questions I had as I read. I like the Blacklace Elderberry, very pretty. The waterfalls is really pretty. I agree with Ginger, you should have that water feature profiled in a magazine.

I've always wanted a pond. I haven't managed to make it happen yet, I don't know if I'll ever actually get there, but this reminds me of just how much I need one. Just all the new plant possibilities alone make it worth it. You have done an exceptional job, really nice. Your plantings look very natural. I have a feeling I'd fill mine up with plants.

Wow, Victoria, looks like a mountain landscape!!! Incredible! Really! I was reading and I was thinking that you and Kim are really creative and hard working. Love your ideas of making a pond, waterfall, wood deck and everything. And when you told us that you have fish inside the pond, I was amazed. I don't think I will ever do this by myself. I'm not at all so much creative as you, guys!!!

Applause, really! You made my night!

awww, I'm so honored Victoria that you included the 'palmeri" for me! I'm wishing I'd purchased more than one I like it so much. Hopefully, it will seed around like yours does. Anyway thank you for doing that! :-)
Now to your pond ~ it's gorgeous. I bet I will wish I had something bigger than my little pre-formed pond soon. I'm enjoying it so much. You all should be VERY proud of the beautiful oasis you've created. It's so well done. It would be hard to come inside at all during the summer! I have that Black Lace Elderberry also and you are absolutely right about how gorgeous it is! Mine just started blooming.
Have you ever had anything eat your Koi? I've been scared to buy any for fear of losing them to herons or raccoons. Yours look pretty big so they must have been in the pond awhile?? One more question, do you put a heater in your pond during the winter? I've wondered if that would help. Mine is only 19 inches deep and I'm hoping to overwinter the goldfish in there????
I'm so glad Catherine prompted you to post about your pond. It's truly is delightful.

Gorgeous! I'm so excited to see it in person!

As you know we just have the two recirculating fountains now, but we did build three different ponds at previous houses. We usually kept a stock tank heater in ours over winter to keep from freezing.

These photos are amazing. You've seen my place and tell me that our property is bigger than yours, but all your photos make your gardens seem far more spacious/elaborate than what I have. How do you pack so much into a regular home lot??