Our son Casey was informed this week that he has landed a job with the Idaho City Hotshots. He'll spend this summer fighting forest fires. Last year he fought forest fires for a private company. Working for the U.S. Forest Service should be a very different experience.

The Idaho City Hotshots are a highly skilled and trained 20-person interagency hotshot crew able to adapt in the constantly changing situations of incident management. In an average season, the crew travels over 20,000 miles responding to incidents throughout the Nation. The crew values professionalism, versatility, hard work, and positive attitudes."

What exactly is a Hotshot?

"A Hotshot Crew, or Hotshots, is a group of approximately 20 highly-skilled wildland firefighters specially trained in wildland fire suppression tactics. They often respond to large high-priority fires and are trained and equipped to work in remote areas for extended periods of time with little logistical support. Hotshots are organized not in "teams" but in "crews."

A Hotshot crew is an interagency national resource that can respond to any fire emergency. As such, they are organized and funded by different government agencies including the USDA Forest Service, Bureau of Land Management, and the National Park Service, various Native American tribes, and the states of Alaska and Utah; the National Interagency Fire Center in Idaho co-ordinates on the national level. Hotshot Crews began in Southern California in the late 1940s on the Cleveland and Angeles National Forest. The name was in reference to being in the hottest part of fires.

As a rule IHC's are some of the nation's leading wildfire professionals and the work they perform is often the turning point on a fire. Their specialty is wildfire suppression, but they are sometimes assigned other jobs, including search and rescue and disaster response assistance. Hotshots not busy fighting fire will also work to meet resource goals on their home units through thinning, prescribed fire implementation, habitat improvement or trail construction projects."


Casey is thrilled. And we're thrilled for him. He will enter training late April. In the meantime he plans on intensifying his personal workouts. The Hotshots don't mess around when it comes to their fitness requirements. They like to run uphill. 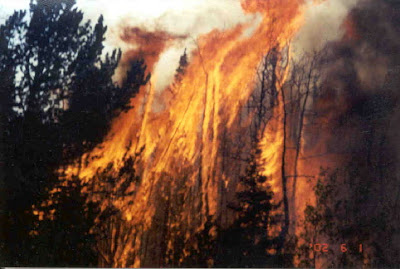 Posted by Victoria Williams at 11:05 PM

WOW! The prestige! Not too many firefighters can call themselves "elite." Awesome!

I didn't even know private companies had firefighting crews, wild!

I'd be bursting at the seams with pride if I were you.

Congrats to Casey!
What a challenging career choice.

Congrats to your son! I'm sure you are all very proud of him.