Not much happening here. I suspect the weather has been getting me down, among other things.

Here in Boise we have inversions pretty regularly every winter.

"How and why inversions occur:

Under certain conditions, the normal vertical temperature gradient is inverted such that the air is colder near the surface of the Earth. This can occur when, for example, a warmer, less dense air mass moves over a cooler, denser air mass."

"Consequences of a thermal inversion:

With the ceasing of convection, which is normally present in the atmosphere, a number of phenomena are associated with a temperature inversion. The air becomes stiller, hence the air becomes murky because dust and pollutants are no longer lifted from the surface."


This can become a problem in cities where many pollutants exist. Inversion effects occur frequently in big cities such as Mumbai, India; Los Angeles, California; Mexico City ; Sao Paulo, Brazil; Santiago, Chile; and Tehran, Iran, but even also in smaller cities like Oslo, Norway and Salt Lake City, Utah, Boise, Idaho which is closely surrounded by hills and mountains that together with the inversion effect bottle-caps the air in the city. During a severe inversion, trapped air pollutants form a brownish haze that can cause respiratory problems. "


Translation: The sky is gray and overcast, smoggy, and colder than normal temperatures. It's depressing. The sun is gone for a week or more at a time. It doesn't help to know that it is shining brightly just above us.
I found this video on Youtube:


Now for some better news:

My French cousin François is now a grandfather (Grand-père) for the first time. Baby and mother are doing well.

I knitted a hat for the new arrival and it made it to France just in time. I used a pattern called Umbilical Cord hat. You can see why. 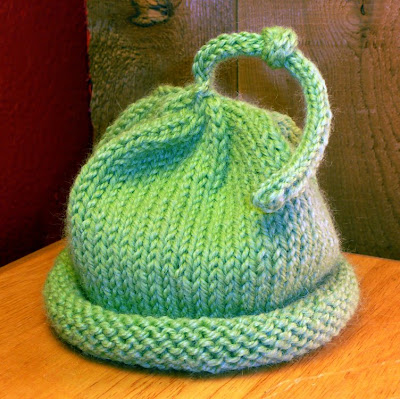 And here, just arrived by email is a pic of the newest addition to the David family - (drumroll)........presenting Baby Alays. What a sweetie. 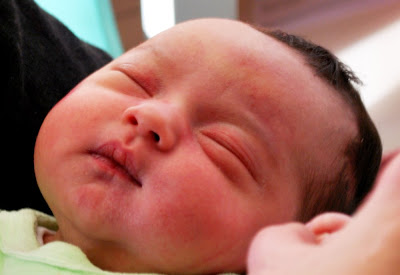 We've been seeing lots of these guys in the trees around the house. 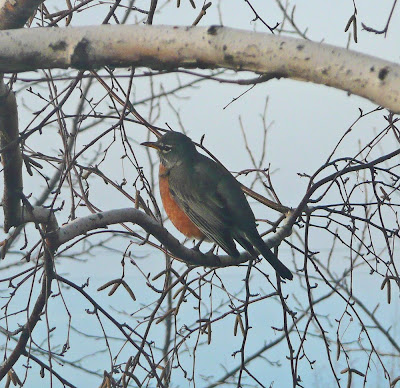 They're always considered to be the first sign of spring, but I'm not sure the ones in Boise ever go anywhere. Check out American Robin.

Kim and I also were able to watch a pair of woodpeckers and their baby on the neighbor's roof for a while. Must have been some tasty insects over there.

We're looking forward to spring, along with everyone else.

Here's a photo from last year to remind us (me) of what is promised to relieve our eyes and souls. 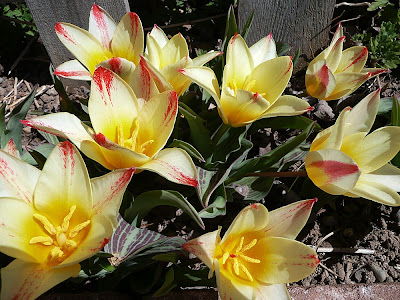 Posted by Victoria Williams at 11:32 AM

hehehe... stuck between the mountains! We get an inversion once and awhile in the Portland area, but just wait a couple days and the wind will blow up the gorge and clear it all out. But, our sky's in winter look just as grey.... except for the last couple days. BLUE! BLUE! BLUE!

I do understand the winter blahs. So much snow here, too .
Not much sun either.
Cute baby hat, like the name!.
I hope you drop by my blog and pick up the award I have gifted you with . You were one of the first people ever to comment on my blog and encouraged me to continue and hopefully get better.

Oh my goodness, I'd never even heard of inversion--not in that context. Blech! You must be miserable. Did you see that Stephen King movie The Langoliers? If so, then you know what I'm getting at. Regardless, my condolences on the mucky air!

But congratulations to the new Grand-père! Woot! Cute hat too!

Hope your Yurt excursion was a great one.

And I wish you many big wind to bring fresh air and blow away the muck.

I've never heard of inversions before even though we get them all the time. The Umbilical Cord hat is too cute!! I still wear the hat you sent me every morning when I walk Day-Z, partially to keep warm and partially to hide my bed head.

I've never heard of inversions before, but I can imagine how depressing that must be.
The perfect hat for such a cute baby!:)

So very nice to hear from you again! Great socks! Cute baby! Mouthwatering tomatoes! (Too bad about the poinsetta.. but that was last post, right?)

Sorry about your inversion, hope the sun will prevail soon.
I love that umbilical cord hat! Seriously, would you consider making one for me in baby blue (newborn size) for my grandson who is due in May? I would be happy to compensate you. Email me from my profile page.

That hat looks wonderful, I'm sure it will keep that cutie pie nice and warm.

Try not to be too down, spring is right around the corner.

As a fellow Idaho resident I too am looking forward to spring. I actually saw my first robin yesterday so spring is near.!!