Casey was home on a visit this week from fighting fires in northern California. It was a quick and stressful couple of days for him as he and his roommate needed to find a house to rent, move out of their current one, and move into a new one, all within two days. 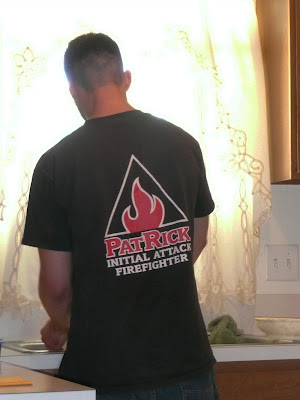 Doing our part to help out, Kim and I babysat Casey's dogs for a night. Scarface (left) was pleased to be back at "Grandma's" house. Bruno (right), only 8 months old, was very well behaved, stayed on the garden paths and resisted any impulse to dive into the koi pond, which Kim and I greatly appreciated. 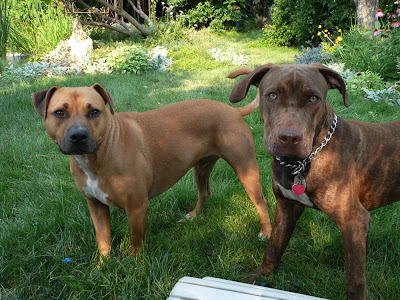 They are a handsome pair, aren't they? 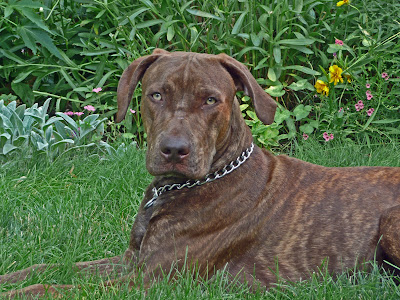 Bruno is a very friendly and loving dog. He follows "Uncle" Scarface around and dotes on him. Both dogs adore Casey and were thrilled to see him after having missed him for a month. Kim and I didn't even bother trying to introduce Bruno to Chelsea. Chelsea hates puppies. Especially oversized ones .

Casey brought home part of a newspaper from Redding which featured an article about trailers being brought in for crews working nights. The trailers had AC so the firefighters on night shift could get some decent rest during the heat of the day. According to the article this was especially useful for firefighters from Alaska and Montana who were not acclimated to the hot weather. 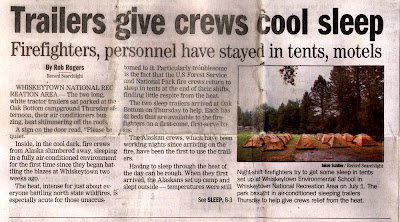 For Casey, the interesting part was that his crew's tents were shown in the accompanying photo. Casey's specific tent is marked by my green arrow. 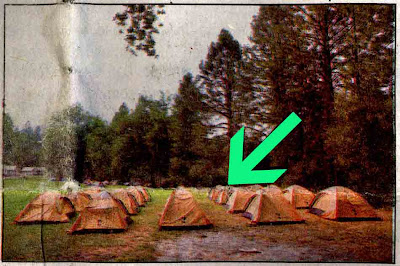 It's been great to see Casey, and a relief to have him find a great house to rent on such short notice. He's full of fire fighting stories and it's interesting, if a bit frightening to me, to listen.

One of the worst stories was the one about the death of a young firefighter. He wasn't on the same crew as Casey but the seriousness of the danger really sinks in upon hearing this sort of news;

Firefighter dies after hit by tree

Here are some pictures Casey took in California.
That's him in the first photo, and he's in the middle in the second photo. 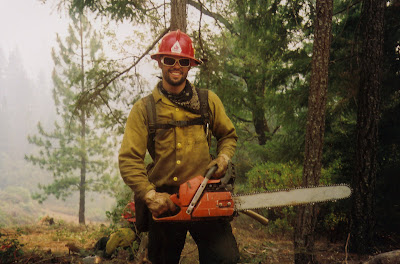 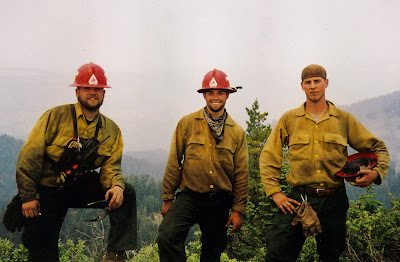 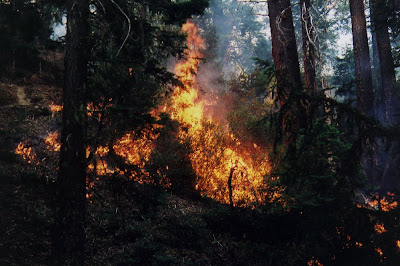 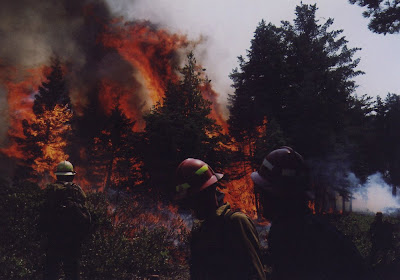 Just five days at home. They shipped them out this morning to Utah. I'm glad he likes this type of work but I'll be happy when the fire season is finished.
Posted by Victoria Williams at 7:26 PM

Very interesting to read about the firefighting, the dangers and the losses. 2 Great looking dogs , puppies?.

I'd be scared to have my son out there fighting fires. I can't imagine how you feel.

I know all about overgrown puppies. Fun, aren't they?

Rosemary - Scarface is an adult, around 4 years old.

My heart goes out to you. There are statistics that add some perspective to the risks associated with firefighting (something about how you're more likely to be killed in a car crash than on a fire), but I know it doesn't help much.

I hate to think about how many gray hairs I gave my parents over the last five years. I think they sleep better at night now...

I hope you are spoiling Casey! He sure deserves it. Scarface and Bruno are adorable! Too bad Chelsea didn't want to join in on the fun.

I love dogs, especially well-behaved ones!

I never really thought about where all those firefighters were bedding down. The trailer must have been such a welcome thing--too bad they couldn't bring enough of them in for them all to camp in as well.

Firefighting is extremely addictive. I can totally understand why they are willing to go through so much to keep doing it. And I'm grateful for their willingness!

I am sure you were glad to see your son for a few days. It must be hard to live and work under such conditions, and having to deal with normal life problems like changing apartments at the same time. I never thought either about where all those firfighters are sleeping.

Our son fought fires for a couple of summers...so I know how you feel.
Thank God for fire fighters!