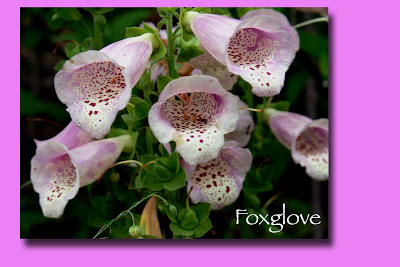 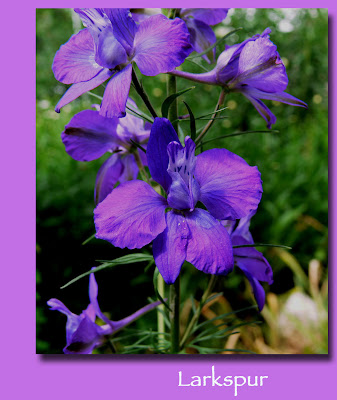 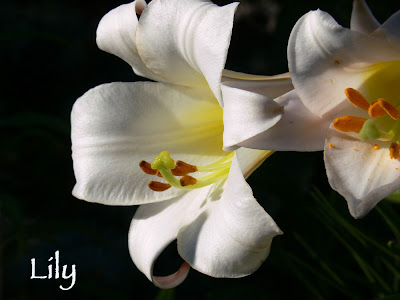 Larkspur: (Young plant, seeds) digestive upset, nervous excitement, depression. May be fatal.
Foxglove Leaves: Large amounts cause dangerously irregular heartbeat and pulse, usually digestive upset and mental confusion. May be fatal.
All cat guardians should be aware that several types of lilies commonly found in gardens--and in households as potted plants and floral arrangements--can be deadly to their pets. Members of the Liliaceae family, including, but not limited to, tiger lily, Easter lily, rubrum lily and some species of day lily, can cause kidney failure in cats.


From Backyard Garden, a partial list of known poisonous plants which may be found in your home or garden:

Whew!
Everyone probably has one or more of these plants and I got to thinking when I mentioned in a seedling post that we grow Castor Bean plants and offhand said they were poisonous. In fact, just one seed contains enough toxin to kill an adult.

Some more interesting facts from the HGTV gardening site:

Fava beans, common in southern gardens, are toxic to people with an inherited red blood cell enzyme deficiency. Within 24 hours after eating the beans, such symptoms as headache, dizziness, fever and vomiting may appear.

The leaves and unripe fruit of lantana, common in many parts of the country, have been linked to accidental poisonings in children, and contact with the leaves can cause dermatitis.

Caladiums and the related houseplant dieffenbachia, or dumb cane, produce compounds that, when ingested, cause intense burning, swelling and irritation of the mouth, lips and throat.

Poinsettias aren't the menace they were once thought to be.
Contrary to common belief, no part of these holiday beauties is toxic to either people or pets. The myth began in 1919 when a doctor erroneously listed the poinsettia as the cause of death in a toddler. Since then, numerous health agencies and scientific researchers have tested the leaves, bracts, stems and sap of the plant. The conclusion: poinsettias are not poisonous. But that doesn't mean anyone would want to eat them. The poinsettia tastes extremely bitter and ingestion could cause stomach discomfort and vomiting. And the milky sap can trigger allergic reactions and skin irritations. 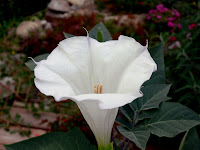 And yes, daturas are beautiful, but don't follow this couple's example: On October 18, 1983, after a husband and wife ate a meal of hamburger prepared at home, the husband collapsed, and the wife telephoned for an ambulance to take him to a local hospital. When the ambulance arrived, the wife also became unconscious. Examination of the home showed no carbon monoxide source. Within 24 hours, the couple regained consciousness and explained the circumstances of their illness.

In preparing the hamburger, the wife added what she thought was seasoning but later realized was seeds of Angels' Trumpets (Datura suaveolens) that had been drying above the stove for planting the next year. After removing most of the seeds from the cooked meat, the husband and wife ate one hamburger patty each. Less than 1 hour later, both began to hallucinate. Other symptoms were tachycardia and severe diarrhea. Both recovered and were discharged after 3 days of hospitalization.
(Reported in Canada Diseases Weekly Report.)

So, what to do? Here is some good advice, again from HGTV:

Thousands of people are poisoned each year by ingesting seemingly harmless plants; half of those affected are children. Remember to call your local Poison Control Center if you have any questions regarding poisonous plants in your home or landscape. Here are some other tips to help prevent and treat illness from poisonous plants:

* Teach children never to eat leaves, stems, bark, seeds, mushrooms, nuts or berries from outside.
* Keep plants that you know to be poisonous out of reach of children. Store bulbs and seeds out of sight and out of reach.
* As much as possible, know the names of all plants in your house and yard. If you don't know the name of a plant, have it identified at your local nursery or home-and -garden center.
* If you take someone to the doctor or emergency room because he or she has eaten a plant, take a sample of the plant with you for identification.
* Any plant that has been treated recently with insecticides or other chemicals should be considered poisonous until proven otherwise.
* Don't assume a plant is safe because birds or other wildlife will eat it.

Kim and I don't worry about the poisonous properties of the plants we grow; there are just too many to keep track of. What I have done in the past is to warn my children as to the dangerous possibilities of putting unidentified material in their mouths.

I like this advice from Janet at Rainy Day Gardening:

"I remember getting into an e-mail discussion with someone on PDX Plantswap once about poisonous plants. She was afraid to grow daphne, because she had young children. I certainly wouldn't question someone's decision to keep their children safe, but I did gently remind her that many of our common garden plants are poisonous, including tomato vines and the aforementioned azaleas. So unless you're willing to rip up most of your landscape, there's no substitute for teaching children at a young age not to eat anything in the garden that they don't recognize. My son likes to graze on fresh herbs, especially mint, so he got taught this lesson early. I point out the especially poisonous plants (like the castor bean growing on my deck), but he never touches anything he isn't sure is OK.

I know there are children who will put anything in their mouths, so whether or not to grow poisonous stuff must be an individual decision. But my point is, even if you avoid the infamous ones like castor bean and foxglove, there's probably still something toxic in your yard. And we don't want to discourage children from hanging out in the yard, because we want them to mow the lawn when they're older, right?"
Posted by Victoria Williams at 8:27 AM

Good post and information, Victoria. I have forwarded it to some friends that do gardening. I knew some of these, but, of course, not all. Thanks for the information.
--- Bob

Victoria - I have never heard of Aloe vera being a poisonous plant. Are you sure about this? I drink a Aloe vera Juice everyday and have not died yet. I think your information on Aloe vera is Wrong. Great post and very helpful.

Jason -
"Many pet owners don’t realize that Aloe Vera can potentially be poisonous to dogs if consumed in large quantities. There are many other species of plants that can cause allergic reactions, rashes and skin and mouth lesions in dogs if the animal is exposed to the plants at certain times in the plants growth. Often the either the leaves, flower or bark is poisonous but perhaps not all three. For example, grape vines themselves are not poisonous to dogs but the grapes can be extremely toxic.
If you believe that your dog has ingested a poisonous plant, or any type of plant, and is exhibiting signs of pain, nervous problems, salivating, drooling, vomiting or diarrhea immediately contact your vet and have the dog examined. Be sure to bring the plant in with you to help the vet identify the poison that was consumed."
Source: http://www.articlecity.com/articles/pets_and_animals/article_1003.shtml

Excellent post! It's amazing how many plants are poisonous, isn't it?

Hi Victoria - Just thought I'd let you know Robin and I have found a place to have a vegie garden this year! If you saw the photos of the greenhouse, that's where it will be. We just bought some seeds and will till the area (15'x60') this Saturday.Hurray!

Great post--and I'm not just saying that because you quoted me :-) There's no substitute for common sense and supervision, at least where children are concerned. I do have one additional piece of advice re: keeping children safe: Don't interplant poisonous plants with edibles if you let your children graze in the yard, and watch out for poisonous weeds. My son accidentally got a bit of bindweed once, because it had infiltrated our mint patch. Fortunately it wasn't serious, but it made me more careful about weeding in that area.

Oh my goodness! Such a l-o-n-g list of potential harmfull plants!!
Aloe Vera is an edible plant..well the juice is..I have drank it!
I had better keep the kitties away from my lilies in the summer!YIKES!
hugs NG

A really good post with many informationen for me.
Thank you!!
I wish you a wonderful Easter time!
Regina