I've put off posting about our veggies. Reason is because we're such newbies at raising them. Kim and I usually grow some tomato plants and throw in a cucumber vine or something. We've both had large vegetable gardens in the past, but when I say past, I mean 20 years ago past.

So it's been a while.

This is our present veggie garden. 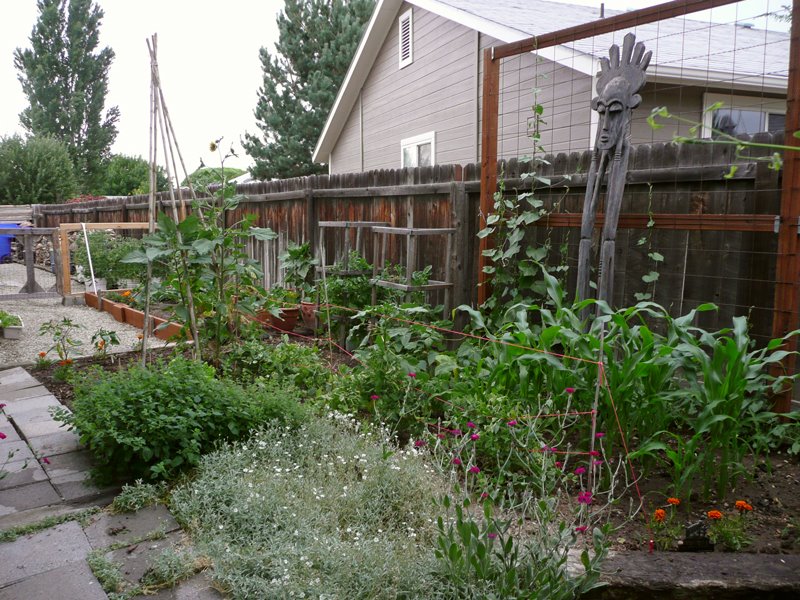 A large flowering crab tree grows nearby. We've always worried our garden wasn't getting enough sun, but Linda at Garden Girl successfully grows veggies in partial shade so we're feeling better about it.

The sweet corn is getting taller. I hope we harvest some ears this summer. 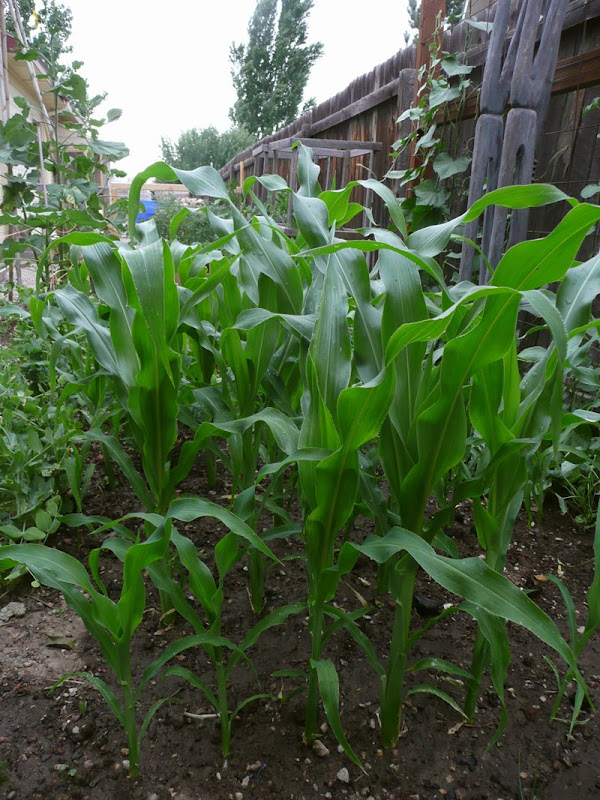 Left to right: Eggplant, basil and brussel sprouts. I started them all from seed. *pat on back* 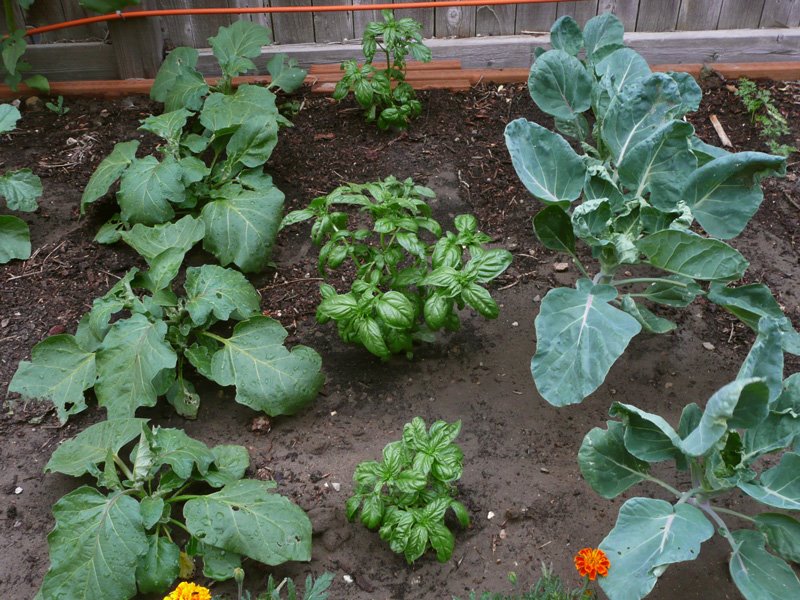 And the tomatoes are coming on. First ones showed up on the plants in the Tuscany Garden hallway of all places. 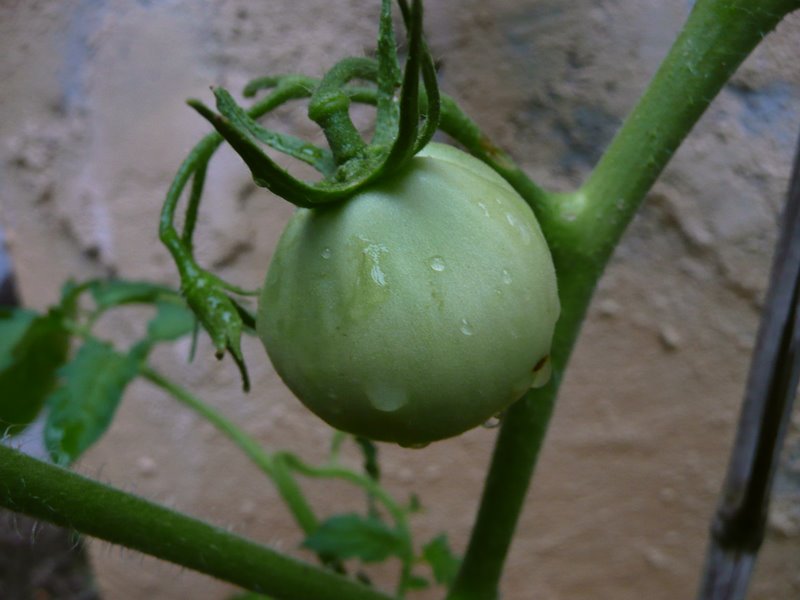 We also have some beans growing, a few pepper plants, one cucumber plant, two cantaloupe, some fennel that's getting the heck eaten out of it and probably won't make it, and I already picked our peas and used them in this recipe. They were delish!

I planted some marigolds around the garden and somebody has been chewing on them. We also cut up some potatoes we had and planted them a while back and they're coming up. Not sure that will work out, but what the heck, we'll give it a try. I'm sure we'll be humbled this year by our efforts but I get the feeling we'll keep trying. Our veg garden is small enough that it doesn't take a ton of extra effort to care for it. We plan on canning some of the tomatoes and I hope we follow through with that.

Got any veggies growing?
Posted by Victoria Williams at 10:28 AM

The shade must not be hurting because everything looks wonderful - good enough to eat! Your vegies are beautiful! Yes, we are big veggie gardeners here - we planted 2 tomato plants and a zucchini! LOL
By the way Victoria you are the winner of the giveaway for my 100th post. If you'll email me with your address at karrorama@gmail.com I'll get that in the mail.

Veggie garden looks great! I SOOO want a veggie garden...I just don't have the room. My hubby has a lawn care business, and where he parks his truck is the best spot for a garden!!! Maybe oneday!

You should pat yourself on the back and say 'job well done!' We never did corn, just the basics- tomaotes, peppers, cukes, cantalope, beans, peas. This year it is just tomatoes. (I don't count the herbs as they are in a container on the deck)

Awesome! Your corn looks very healthy and beautiful! I would LOVE a veggie garden, but my stupid dogs dig up anything I plant in my back yard. I've resorted to growing tomatoes in containers, but have yet to venture further than that. Your garden already looks like a great success! BTW, I had horrible earwigs eating up my marigolds. Maybe they are your culprit!

well, your veggies definitely look better than mine! So you're doing something right! :)

What a nice veggie garden. I like how it's got character. Everything looks like it's growing really well.
We've got tomatoes, potatoes, zucchini and peas. Not a whole lot. We do have quite a bit of fruit though.

The fennel most likely you are growing Black Swallowtail butterflies! The garden looks great to me.

I feel encouraged by someone else being successful at growing veggies in partial sun too. That's kind of how my veggie plot ended up but mine are not progressing as well as yours. Too cool and too much rain I think. Maybe if the sun comes out for more than one day at a time, they'll all the sudden take off. I'm a veggie "newbie" too so we're in this together. :-)

For what its worth I think your plants look well. You can be sure that even seasoned gardeners have things that fail, often its the season, what grows well one year will be rubbish another, you just have to keep on growing and enjoy what you recieve. Bob

Excellent garden! I wish I had the room, but will have to wait until next year, as we are putting up the fencing today. :-) Your corn looks so great!

You're making it work in part shade? Then there's hope for me. This year I'm starting out with my first edibles in a few herbs, but I've been tempted to try some veggies. It's so hard when you're a seasoned gardener in some ways to go back to being a novice with a new type of plant. Cheers to you.

oops! I miss my commenting! I 'll try to do it again. I love your new Blog and your veggie garden. When I see your pictures I 'm very hungry just in this moment. lol.

Have a good time. Wurzerl

The garden looks fantastic! It's always fun to see how other folks plant things.